Fair enough. Along with the rest of her generation, Villaseñor is expected to face the brunt of human-caused climate change this century. It’s like her parents burned a box of pizza rolls and left her to clean up the mess — except instead of nuclearly hot tomato paste, the object of abuse is what remains of life on Earth.

In case you missed it, by 2050, when Villaseñor is in her mid-40s, her home of New York City is expected to warm by more than 5 degrees Fahrenheit. The likelihood of Hurricane-Sandy-sized floods could increase 17-fold. The city’s winters will have 22 fewer below-freezing days. The summers will bring twice as many days with temperatures above 90 degrees.

Villaseñor, for her part, is choosing to fight back. Protesting the negligence of her forebears, the young activist and founder of the group Earth Uprising is on strike. Every Friday for 37 weeks, Villaseñor has camped out on a park bench in front of United Nations headquarters in New York holding two signs: “School Strike 4 Climate” and “COP24 Failed Us.”

“I’m frustrated that the climate crisis has been put on my generation’s shoulders,” she says. “We can’t even vote yet.” [Ed.: We hear you. When Grist was 14, we were still mourning the devastation wrought at COP 15.] It’s the kind of deep-seated frustration that’s helping fuel a burgeoning youth climate movement.

But while young activists like Villaseñor are skipping class and sticking it to the climate man, others can feel stuck in a mindset of doom and gloom. Dr. Erica Dodds, 29, chief operating officer at the Foundation for Climate Restoration, describes the initial fatalism she encounters in the young people she connects with. She says their feelings make sense: “When something feels impossible, it’s hard to mentally engage with it.”

The challenge for youth climate activists, then, is larger than just convincing the political class to prioritize climate action. It also means convincing other young people that restoration is actually possible and they can trigger it. Together youth activists can hold political and climate leadership accountable for our common survival.

In the face of anger and apathy, Dodds points to the promise of climate restoration. When goals are framed in terms of incremental change — as opposed to specifically calling for a livable future — it’s easy to get angry. Restoration is an antidote for despair: More than merely seeking to minimize the worst impacts of climate change, restoration offers hope for a brighter future, she says — one we can survive. It spells out “the ultimate goal we’re trying to achieve: a safe and healthy climate.”

Dodds recalls a recent Washington, D.C., workshop she ran with high school students, whom she asked to reflect on the climate reality for which they’d been preparing themselves. What would life look like in 30 years? The answers weren’t pretty.

But when Dodds introduced the idea of restoration — describing solutions that could bring carbon dioxide levels down to historically safe levels — and encouraged the students to re-envision a future grounded in a healthy climate, their visions for the future became more hopeful. [pullquote]Galvanized, one student told Dodds she’d been completely avoiding thinking about her future, “because she wasn’t sure she’d have one.” Restoration became an antidote for despair.[/pullquote]

“It’s really powerful to see the ways people’s faces change when they understand this is a problem we can fix,” says Dodds.

Current plans to stave off the worst impacts of climate change do only that: slow catastrophe. Even the grand scientific consensus of the IPCC imagines a world warming above proven healthy levels. But with existing technologies like concrete made with synthetic limestone and the use of silica microbeads to reflect the Arctic sun’s heat, we already have tangible solutions to restore the climate by 2050.

Ambitious, yes, but it’s what we have to do to create a truly livable future for humans and other species. And while it may seem like a tall order, it’s a vision that’s already inspiring the collective imagination.

The need for ambition rings true to Daphne Frias, a 21-year-old junior at SUNY Oswego. Frias got involved in environmental activism as a freshman after watching flash floods inundate college dorms during severe rainstorms. “I had three more years on campus,” she explains, “and I became worried about my educational future here.”

She stuck with it, but now, working on the global outreach team for the youth-led climate group Zero Hour, she understands how hopelessness can creep in. “A lot of people don’t understand there are everyday solutions to these problems,” she says, citing the politicization of the issue as fueling propaganda and misinformation. “It all makes it sound unattainable.” 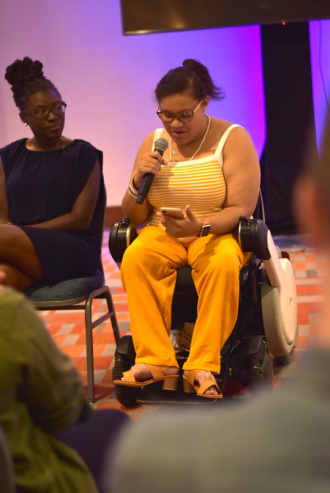 Frias’ own vision rests on reimagining a healthy, equitable climate, too. “I’ve actively seen the four seasons disappear as I’ve grown up,” she says, describing changes she’s witnessed in New York during her own lifetime. “I want a return to normal weather patterns — to restore the actual fluctuation of seasons.”

For politicians, it can be easy to dismiss visions of the future like Frias’ as idealistic. But Dodds points to fields like poverty alleviation and epidemiology in which simply avoiding catastrophe — as opposed to pursuing a vision rooted in human flourishing — doesn’t fly. “Imagine if we had tried to reduce smallpox instead of eradicate it,” she says. “The outcomes would be pretty different. And until now we haven’t been willing to work for goals beyond reducing the impacts of climate change.”

Hope is a fickle thing, but it can grow from commitment to a clear vision. For Villaseñor, on climate strike at 14, hope comes from her activism. “When I take direct action, it really helps me,” she says. “It makes me feel like I have a say in my future.”

It’s this notion — that we’re more than just helpless passengers on an out-of-control climate rollercoaster — that strategists like Dodds see as key to solving the climate crisis. “We can move from resignation to restoration,” she says. And once people feel motivated, they can move from “pulling out their hair to rolling up their sleeves.” To get started, ditch the incrementalism, she says. Instead, start imagining the world you want.

Some young people are already there. Says Frias: “You have more power than you realize.”

This article is sponsored by the Foundation for Climate Restoration, a nonprofit partnering with local governments, NGOs, and communities around the world to launch Climate Restoration projects at scale. Its Healthy Climate Alliance is an education, networking, and advocacy program to advance these goals.