According to your Google searches, September was climate change’s biggest month of all time. For the first time since Game of Thrones became a thing, Americans showed more interest in climate change than the plight of the scattered Stark family.

The peak of climate change queries came the week of September 20, even rising above searches for “impeachment.” That’s the day that millions of young people around the world skipped class for what may well have been the biggest climate change protest in history.

That search spike beat out climate change’s previous high from June 1, 2017, when President Donald Trump announced he intended to pull the United States out of the Paris Agreement. The slightly smaller jump in December 2015 came when countries were meeting in Paris to draw up the agreement in the first place. 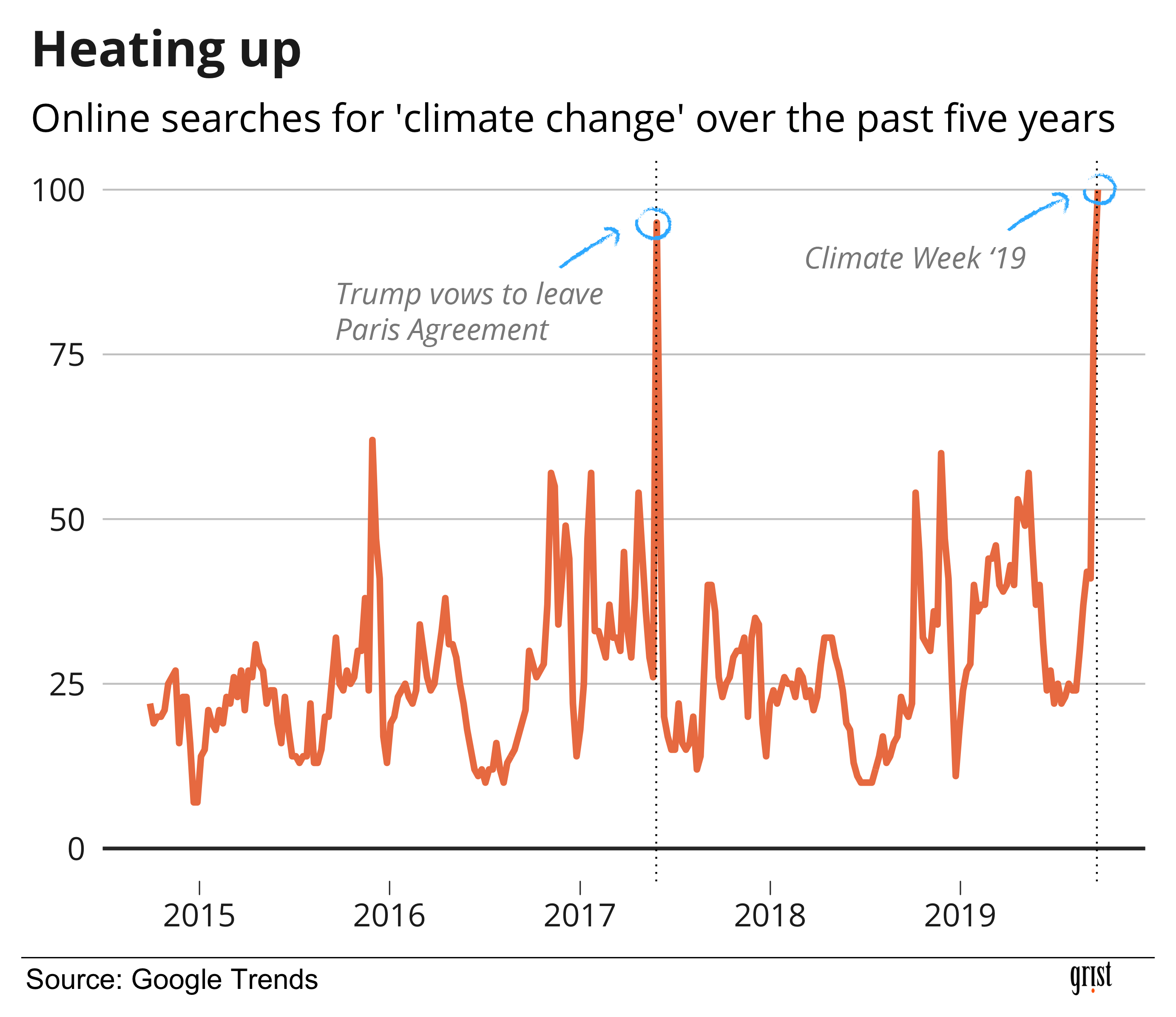 So what was everybody searching for this September? They were on the hunt for information on protests and rallies tied to the climate strike, according to Google Trends’ publicly available data. Perhaps looking for inspiration for their protest signs, many Americans also searched for “climate change poster.”

September was kind of like one long Super Bowl for climate change, with several events (including the strike) in anticipation of the United Nations Climate Action Summit in New York City the last weekend of the month. CNN and MSNBC held marathon-length town halls grilling presidential candidates about their plans to take on the climate crisis. Some 300 newsrooms stepped up their reporting on our overheating planet in a collaborative effort called Covering Climate Now. On the science side, the U.N.’s Intergovernmental Panel on Climate Change released a landmark report that spelled out how climate change is wreaking havoc in our oceans.

And Greta Thunberg paid a visit to the U.S., sailing across the Atlantic Ocean to attend the U.N. summit. The 16-year-old Swedish activist who started the climate strike movement delivered a chilling address to world leaders that went viral. Perhaps that explains the uptick in searches for “climate change girl speech”?

Over the course of the month, the phrase “climate change” was most popular in Washington D.C., Vermont, and Hawaii. Worldwide, the hotspot for climate-related searches was Fiji — an island nation in the South Pacific that’s getting submerged by the rising seas.

These scientists are trying to save melting Arctic ice