On the road to the Green New Deal, New York's latest climate legislation may be the first stop 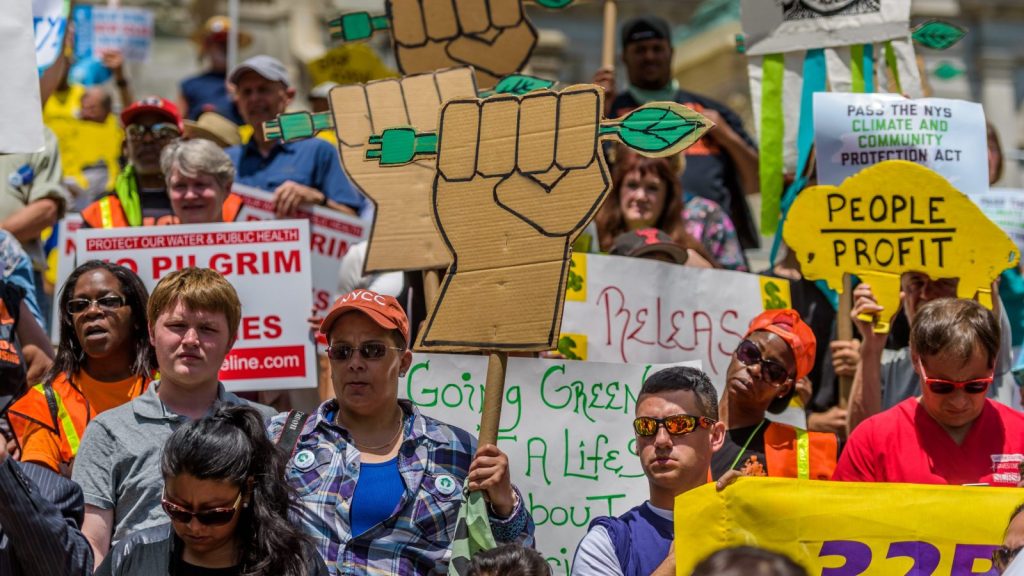 Pacific Press / via Getty Images
the art of the climate deal

On the road to the Green New Deal, New York’s latest climate legislation may be the first stop

Update: A new version of this bill was announced on June 18th

If the national Green New Deal is the dashing young hare in the race to enact sweeping climate law, then New York’s Climate and Community Protection Act is the persistent tortoise who, as of Sunday night, seems poised to cross the finish line. The Empire state’s long-suffering piece of climate legislation has been called a precursor to the national Green New Deal and, if passed on Wednesday as expected, will be one of the most ambitious attempts to tackle both climate change and environmental injustice.

The Climate and Community Protection Act has had a bumpy ride in politics. This is the fourth year it’s been introduced into the state legislature — in past years, the CCPA was shot down by the Republican-run state Senate. Now, with Democrats finally in control, this session seemed to be the act’s first real shot at becoming law.

But just a few days ago, it looked as if the bill might be dead in the water after some disparaging comments made by Governor Andrew Cuomo, who signaled it wasn’t a high priority in the closing days of the session. But on Sunday night, New York lawmakers reached a deal reconciling the act’s contested pieces, such as whether the state should be allowed to offset or sequester a percentage of fossil fuels rather than eliminate their use completely. And fans of the national Green New Deal are paying attention, as the legislation’s anticipated success could shed some light on what it could take to pass any federal policy in the future.

Here’s what made it in the Climate and Community Protection Act: the bill sets the state on track to cut out 85 percent of its greenhouse gas emissions by 2050 while allowing the remaining 15 percent of planet-heating gases to be captured or offset. It also mandates that at least 35 percent of the state’s clean energy funds are spent in “disadvantaged” communities throughout the state. While these goals surpass any other state’s environmental justice commitments — they also represent a compromise for grassroots groups, who initially pushed for eliminating 100 percent of greenhouse gas emissions in the state.

The statewide coalition of advocacy groups that brought the bill to fruition, New York Renews, are still celebrating the deal as a net win. Communications coordinator Arielle Swernoff said the act largely stays true to the values the coalition stands for, even if “it doesn’t get everything done in terms of simultaneously addressing the climate crisis and challenging environmental and racial injustice.”

The debate over whether economies need to quit fossil fuels cold turkey or instead find technological and market-based strategies to limit planet-heating gases in our atmosphere isn’t new or confined to New York. Green New Deal co-sponsors Senator Ed Markey and Representative Alexandria Ocasio-Cortez caught flack from some environmentalists over keeping carbon capture and offsets on the table in their resolution for a Green New Deal. Those concerns have to do with human rights and public health as much as climate change, since extracting and burning fossil fuels have led to some communities being displaced or disproportionately burdened by harmful pollutants emitted alongside greenhouse gases.

But other stakeholders — Big Oil and Gas and some mainstream environmental groups alike — contended that stopping the use of fossil fuels altogether could be unrealistic and doesn’t take advantage of innovations in carbon capture and storage.

“We don’t love where [the bill has] landed but we’re happy that we landed where we are,” said Adrien Salazar, a campaign strategist at progressive think tank Demos (and 2019 Grist 50 Fixer). He adds that the bill contains parameters to make sure that the 15 percent of captured or offset emissions don’t place additional burdens on communities that have historically been burdened by fossil fuel pollution.

“What New York has actually done is pushed the envelope on this [issue] federally,” said Salazar, whose organization is part of the New York Renews coalition.

The coalition had also pushed for a slightly higher percentage of funds (40 vs. 35) to go to the communities most vulnerable to climate change and pollution. This was a number that didn’t seem to sit well with Governor Cuomo, who had previously called for an alternative state climate plan which did not set aside funds for vulnerable communities.

Speaking at a press conference last Wednesday, Cuomo echoed concerns from some suburban districts representatives who worried that the bill’s funding for “disadvantaged” groups might be funneled into New York City alone. “I’m a big proponent of environmental justice. But a proposal that says 40 percent of the environmental funds must be spent in impacted communities – what’s the legal definition?” said Cuomo. “The money should go where the money is needed to go.”

The bill does lay out some guidelines on which neighborhoods will be considered disadvantaged: those include areas with lower incomes, locales where pollution has placed residents’ health at risk, and places more vulnerable to storm surges, flooding, and heat. Public hearings will be held prior to finalizing criteria for which regions will receive the earmarked funding. The act also includes stipulations intended to provide protections for displaced fossil fuel workers and ensure fair wages to workers building the renewable energy economy that’s to come.

Despite the compromise, grassroots groups success in allocating more than a third of the bill’s funding for disadvantaged communities sets a precedent for ensuring a significant portion of climate adaptation and resilience projects, such as energy efficiency upgrades to community solar projects, are located in communities that have been hit first and worst by climate change and other consequences associated with burning fossil fuels.

The bill also establishes a reporting system to track from which sectors the states’ greenhouse gas emissions are coming. “It provides a lot of opportunity to tailor the solutions to be most effective,” said Nilda Mesa, director of the Urban Sustainability and Equity Planning Program at Columbia University’s Earth Institute. Mesa said New York City used similar data to set its own targeted emissions reduction goals.

While as of now, the bill seems likely to pass, challenges remain — like figuring how to pay for it all.

“We’re not going to suddenly magically come up with billions and billions of dollars of infrastructure money without generating revenues from another place or without federal help, and both of those things would be very hard to do,” said Steve Cohen, director of the Master of Public Administration Program in Environmental Science and Policy at Columbia University’s School of International and Public Affairs. Still, Cohen is cautiously optimistic: “Getting this bill passed would indicate support for the concept and then the tougher bargaining over money comes next.”

The Senate must vote on the bill before the state’s legislative session closes on June 19th. Cohen believes that even if Cuomo still has reservations, he will have no choice but to sign it if the bill garners enough support to pass New York’s Democratically-controlled Assembly and Senate.

Even assuming the bill does pass, many of the advocates who campaigned to reach this moment won’t be resting on their laurels for long. Next up, they’ve got another climate bill still called the Climate and Community Investment Act that’s currently stuck in committee. It would institute a fee on polluters and potentially drum up some of that much-needed funding for climate policy.