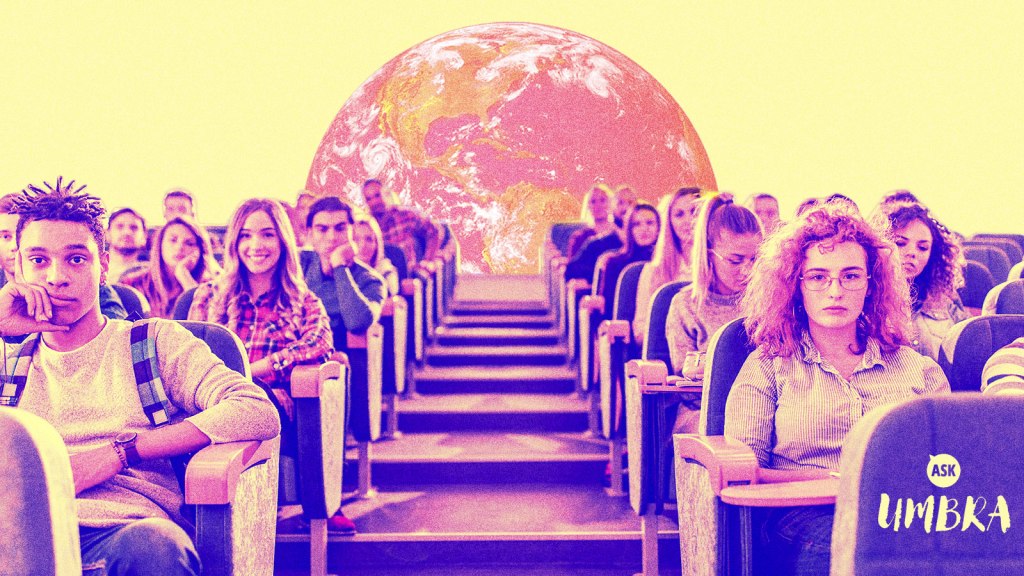 I teach Earth Science, and my students always ask me who they should believe when it comes to climate issues. What do I tell them?

— Trying to Educate As the Climate Heats

The good news about young brains — as anyone who’s been even passively absorbing climate news over the past year probably knows — is that the Teens Are Pretty On It. Seattle-based climate activist Jamie Margolin launched the nonprofit Zero Hour when she was yet to hit voting age. The International Youth Climate Strike, which took place in over 130 countries this past March, was organized by a group of middle and high school students, some of whom were as young as 13. And Swedish activist Greta Thunberg, who’s become something of a patron saint of the climate movement, just sailed across the whole-ass Atlantic Ocean on a zero-carbon yacht to school the United Nations on climate action at the tender age of 16.

It’s easy to read that paragraph as a teacher and think, “I’m good here! The next crop of kids is already all over the climate thing.” But just because certain members of Generation Z are super motivated to take action on global warming doesn’t mean many of them don’t need a little more schooling on the subject. A Pew poll from this past fall showed that the percentage of the post-1995 birth cohort who believe climate change is connected to human activities is slightly less than that of my fellow millennials. (It must be said that my generation includes Tomi Lahren, so we’re hardly perfect.)

Kids today may be “digital natives” who get the latest TikTok update downloaded directly to their brains, but they’ve also had to grow up wading through the rising cesspool that is online misinformation. A 2017 report published in American Educator found that more than 80 percent of middle schoolers couldn’t tell the difference between an ad and a news story.

When you add into the mix that many media outlets continue to prominently feature climate deniers (despite the vast majority of scientists affirming that human-caused climate change is real), and the fact we’re talking about complicated science stuff and existential threats to human life on Earth, you have a recipe for utter bafflement. I mean, the youngest Gen Zers are just starting to wrap their heads around multiplication tables, let alone planetary physics.

Let’s start with the first … prong, if you will. As much sense as it might make to direct someone to read the latest Intergovernmental Panel on Climate Change report for the most comprehensive information on the mechanisms, wading through a 2,000-page research document isn’t exactly easy. (It’s hard for me, and I’m a climate journalist.)

That’s the point that Jerome Foster II, 17-year-old climate justice activist and founder of the young voter organizing nonprofit OneMillionOfUs, makes when it comes to choosing both trustworthy and background-appropriate climate sources for teens. “I would say don’t jump too deep into the science,” he advised, at least not off the bat. “If you’re teaching a high school class, the IPCC report is so technical and filled with jargon.” Instead, he suggested having students turn to explanatory news organizations like Inside Climate News or Climate Central or, dare I say, Grist.

But as I’m sure you’re aware, it’s not enough to have your students bookmark a few good news sites. It’s absolutely crucial that they develop basic media literacy skills: in other words, rules to know whom to believe and whom not to believe. As I mentioned, there are a lot of outlets, businesses, and individuals out there who are actively working to downplay the urgency of climate change.

One thing you can do is make your students aware of their possible motivations for doing so: An outlet might be directly paid by the fossil fuel industry or other business interests, or they’re trying to push a political agenda. Spotting the signs of fake news isn’t just about scanning for poor grammar, old time stamps, or inflammatory word choices. Researching sites’ (and individuals’) funding sources can be equally, if not more, revealing when it comes to media bias.

Since I am no classroom teacher (I admire what you do, but find the pressure of helping young brains actualize themselves to be paralyzing), I asked my wise and trustworthy educator friend Sophie Date for some advice on this front. “In my history class, I make perspectives and analysis a center of every course that I teach,” she said. “Unfortunately, it’s not as simple as saying ‘this source has bias, this source doesn’t.’ I work really hard to help kids pull out the gray area of who is believable, through primary sources, debate, and discussion.”

To be clear, Sophie isn’t suggesting that climate change is up for debate, as over 97 percent of actively publishing climate scientists confirm. She’s advocating for being able to defend the veracity of your sources!

But while it’s smart to look to the translated research of scientists who study planetary physics and ecology and oceans and anything else that contributes to our growing body of climate knowledge, I believe it’s also important to communicate to your students that trust isn’t placed so much in the individuals as it is in the practice of science as a whole. As acclaimed science historian Naomi Oreskes said in a 2014 TED talk, “Science … is not based on any individual, no matter how smart that individual may be. It’s based on the collective wisdom, the collective knowledge, the collective work of all of the scientists who have worked on a particular problem.”

And unlike other scientific topics of interest like extraterrestrials or string theory, climate change is not theoretical — it’s already a very significant threat to their communities. Helping teens recognize how it’s affecting their personal sphere might be the most effective way to get them to connect and trust in it.

“I think when youth question climate change, they’re navigating around a lot of the noise and asking the really relevant questions: ‘How does it show up for me in my life, what does it mean for me?’” said Heidi Roop, lead scientist in science communications at the University of Washington’s Climate Impact Group. Roop, who advises the state’s initiative to train its teachers on this exact question, says that an excellent way to address kids’ desire for focus is to bring in a local expert, like someone from the local forest service, or a fisherman, or a civil engineer.

Students tend to believe people in their own community, because they share the same home and the same experience. Hearing from people who are preparing for and dealing with climate impacts already, right now, in their hometown is a pretty sure way to get them to understand its importance.

“It’s less about the greenhouse effect, which is fundamental, but more, ‘What does this big issue mean? How does it show up in your home?’” Roop said.

But sometimes the home factor can work against a young person’s understanding of climate change. While most parents say they want their kids’ schools to address global warming, you may be sensitive to potential conflicts that could arise from teaching the subject to children who may, for whatever reason, be exposed to some climate denial at home.

Luckily, I have some good news on that front, too! The kid-parent relationship isn’t necessarily a one-way route of trust or knowledge. When young people learn about climate science, or more importantly the impacts of climate change, and relay that information to their parents, studies show those adults are more likely to appreciate the risks and urgency of the whole crisis.

“Not only are youth leading international conversation around climate, evidence suggests they have a strong influence on their parents,” Roop told me. “That’s true even in places where there is a perceived disbelief in climate info and lack of concern.”

So know you’re fighting the good fight, TEACH. It can feel isolating and challenging to try to clue kids in to the dire nature of their future — trust me, I know! — but you’re hardly alone in doing it. Keep pointing your students toward trustworthy adult sources. And, of course, consider giving a shout out to their peers who are rightfully shouting about it every day.