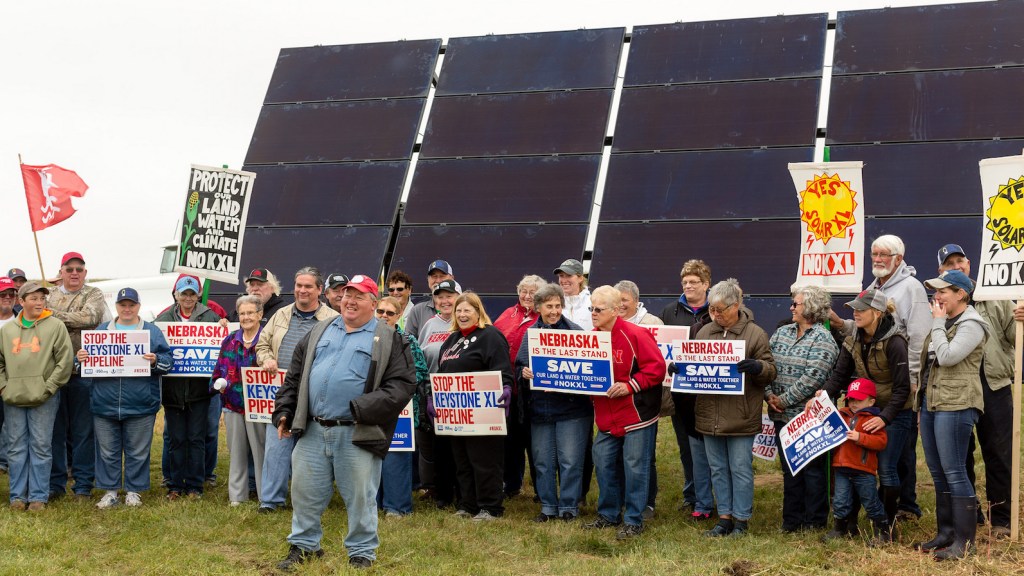 The project continues to be hit with protests, lawsuits, and seemingly endless postponements. Activists are not giving up — and they’re using new and creative methods to fight the oil infrastructure.

Here’s a quick rundown of how environmental and indigenous rights activists are still building blockades.

This is a cheeky effort by a coalition of tribes, landowners, and activist groups to erect solar panels along the pipeline route. The panels generate energy for the local community, and would have to be removed in order for the pipeline to be built.

“The contracts say you can’t have any permanent buildings along the pipeline route,” says Jane Kleeb, founder of Bold Nebraska, a group that organizes farmers, ranchers, and tribes against the pipeline. “So TransCanada would be forced to remove them.” Destroying community-built solar installations to build an oil pipeline? Not the best look.

Solar XL is part of the broader work that tribal groups have been doing for years to go off the grid, says Faith Spotted Eagle, a member of the Yankton Sioux Nation in South Dakota and an organizer against the pipeline. “We’ve already been moving in the direction of solar,” she says. Planting those panels in the center of the pipeline path is the logical next step, Spotted Eagle points out.

A husband and wife near Neligh, Nebraska, have further complicated the situation for TransCanada by selling a 1.6-acre plot of ancestral land to the Ponca tribe. The land, which has been used for the past five years for planting Ponca sacred corn, has now been returned to the tribe permanently.

This is likely to be particularly irritating to TransCanada, as they have pointedly avoided running the pipeline through any tribal lands. And they were already forced to reroute the pipeline away from environmentally sensitive areas. But now the Ponca owns property directly along the pipeline route — and they can use their special legal status as a tribe in future negotiations.

There are eminent domain battles brewing over the pipeline, too. Bold Nebraska has been connecting landowners who refuse to sign easements with attorneys, hoping to delay and challenge the implementation of TransCanada’s eminent domain claim for as long as possible. Kleeb estimates that around 20-25 percent of the pipeline route is “locked up” by owners who have pledged that they will not give over their land to TransCanada. (The company did not respond to requests for comment.)

And — as is increasingly the case in climate and environmental conflicts — there are ongoing lawsuits. Although South Dakota’s Supreme Court shot down an appeal from activists on Thursday, there’s still hope for a similar appeal in Nebraska.

The Ponca tribe, Yankton Sioux tribe, and the Sierra Club filed documents in the Nebraska case three weeks ago, arguing that the Keystone XL will have dangerous impacts on the state’s environment and that the state public service commission violated due process in its original ruling.

The pipeline will also cross the Ponca’s “Trail of Tears,” the route taken by the tribe during their forcible removal by the federal government in the 1870s. This contested strip of land, the Ponca tribe argues, should be preserved for the public interest and for its religious and cultural significance.

The bottom line: There are many ways to skin a cat — or postpone a pipeline. Kleeb is hopeful that Keystone XL will never start construction. “They’re facing at least two years of legal challenge with Nebraska,” she says. “And if a Democratic president gets elected, they would reject the pipeline. There are a lot of factors on our side that support this never getting built.”