The first hurricane of the 2018 season has formed in the Atlantic Ocean, and it’s headed toward the Caribbean. Those aren’t welcome words, especially considering the region’s fragile recovery after last year’s record-breaking storms.

On Friday, the National Hurricane Center upgraded a tropical storm in the central Atlantic to Hurricane Beryl, with top wind speeds of 80 mph. The storm’s hurricane-force winds are only 20 miles wide, relatively small for a hurricane, so Beryl’s behavior is especially unpredictable.

In advance of the storm, Puerto Rico’s government has opened more than 400 shelters and started distributing satellite radios to mayors. Even more worrisome: Beryl’s path takes it dangerously close to tiny Dominica, an island-nation of 75,000 people still struggling to recover after taking a direct hit from Hurricane Maria last year. Dominica’s government has already circulated a list of 120 shelters. 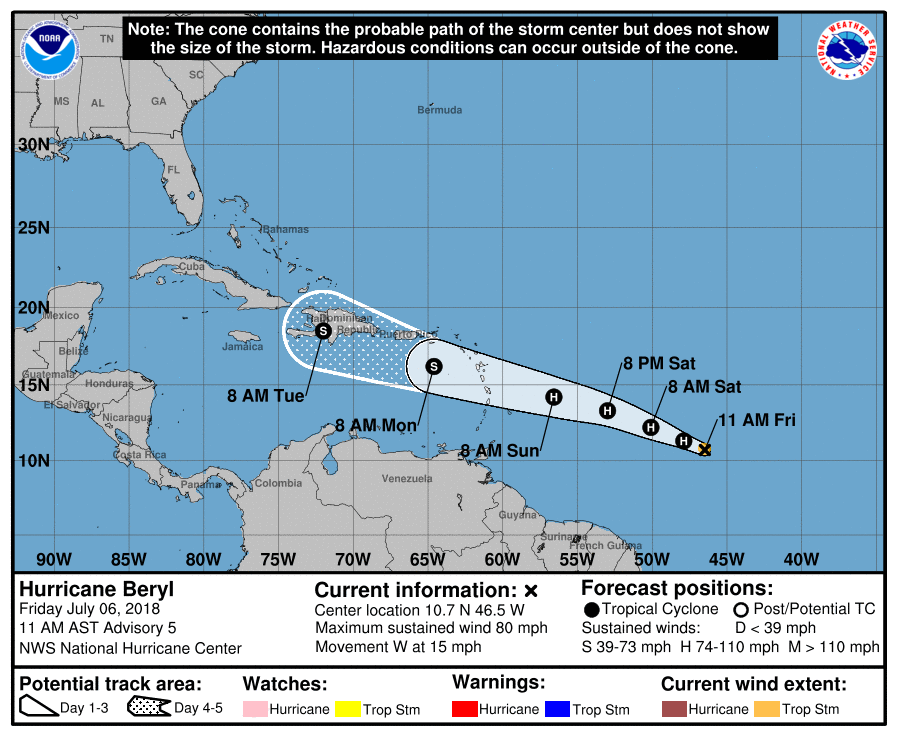 Beryl could strengthen to a Category 2 hurricane this weekend with winds of up to 100 mph before entering the eastern Caribbean on Sunday afternoon, according to the National Hurricane Center. Thereafter, it’s forecasted to steadily weaken as it passes by Puerto Rico and the Dominican Republic. Islands along Beryl’s path could face torrential rains of 4 to 8 inches — enough to cause flash flooding, worrying enough in normal circumstances.

In a press briefing on Thursday, Puerto Rico’s governor, Ricardo Rosselló, said that, despite the storm’s expected weakening, Beryl remains “a danger due to the vulnerable condition of Puerto Rico.”

Puerto Rico, which just finished restoring power to all of its municipalities on July 1 — 284 days after Maria made landfall — is simply not ready for another storm. Tens of thousands of people are living in homes without permanent roofs, and the power grid routinely fails during passing showers. A recent independent estimate conducted by Harvard University showed that more than 4,000 people likely died in the storm and its aftermath, making it the deadliest natural disaster in modern American history. The island’s recovery was plagued by delays and indifference by the federal government — meaning that many of those deaths were likely preventable.

Beryl could also pose significant setback for Dominica’s recovery efforts. The country lost half of its buildings from Maria’s 160 mph winds, and is in the middle of a transformational change to prepare for the future storms of a warmer world.