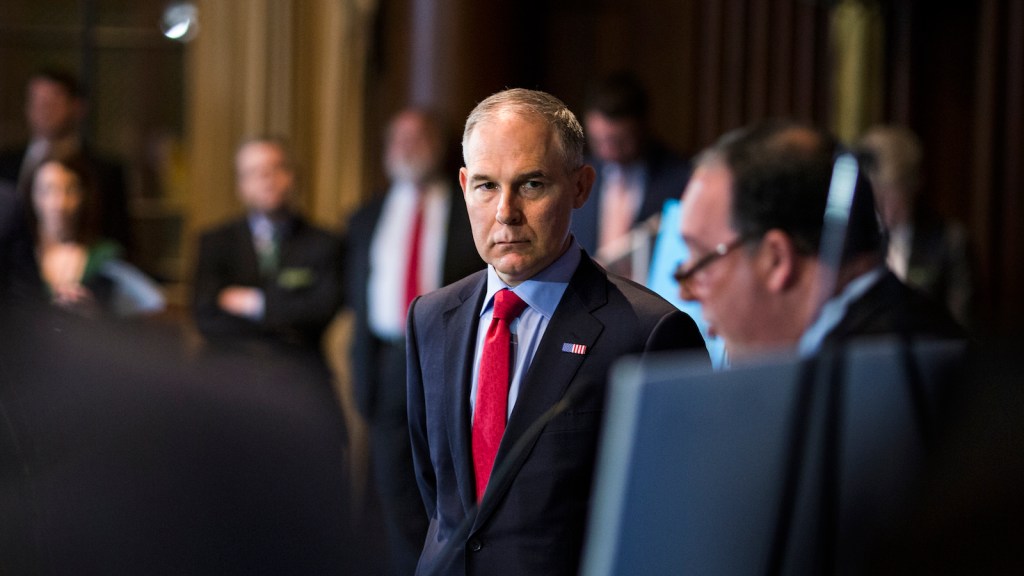 The moment you’d been waiting for arrived on Thursday afternoon when Scott Pruitt, fan of fancy lotions and fossil fuel lobbyists, finally resigned as head of the EPA.

In a year and half, Pruitt managed to squeeze in a staggering number of scandals, spending loads of taxpayer dollars on first-class flights, keeping a “secret calendar” to mask his meetings with industry representatives, and so much else. At the time of his departure, he faced 18 federal investigations — going on 19.

“It is extremely difficult for me to cease serving you in this role first because I count it a blessing to be serving you in any capacity,” Pruitt wrote in his resignation letter to President Trump, “but also, because of the transformative work that is occurring.”

What sort of “transformative work” is occurring at the EPA? Pruitt has been overhauling the agency to ensure that industry interests come before environmental protection. He weakened rules that kept polluters in check — many of which are being challenged in court — and tried to jettison others like the Clean Power Plan.

Many breathed a sigh of relief when the news broke, but others expressed concern that Andrew Wheeler, a former coal lobbyist who’s now the EPA’s No. 2, will take over and continue Pruitt’s deregulatory agenda. Twitter brought us some creative reactions, too — even limericks.

Here’s how some big names in politics and environmental activism reacted to the news:

Senator Bernie Sanders, Democrat from Vermont: “Scott Pruitt was the worst EPA administrator in the history of the agency.”

Representative Nancy Pelosi, House Minority Leader: “One down with the resignation of @EPAScottPruitt, dozens more to go until we’ve drained the swamp of the Trump Admin’s toxic culture and corruption. #PollutingPruitt”

Representative Gerry Connolly, Democrat from Virginia: “Scott Pruitt’s reign of venality is finally over. He made swamp creatures blush with his shameless excesses.”

Senator Kamala Harris, Democrat from California: “Just because Scott Pruitt resigned doesn’t mean we’ve forgotten about the taxpayer funds he’s misused or the damage he’s done to our environment. We must have someone running the EPA that will protect clean air and clean water.”

Noah Bookbinder, executive director at Citizens for Responsibility and Ethics in Washington: “Good.”

Kristin Mink, the woman who confronted Pruitt at a restaurant with her child and asked him to resign: “Hey @realDonaldTrump where are you going to lunch tomorrow?”

Scott Dworkin, co-founder of the Democratic Coalition: “Someone needs to make sure Scott Pruitt doesn’t smuggle his $43,000 soundproof phone booth out of the EPA offices. It’s evidence.”

We’ll leave you with a more artful version of Pruitt’s resignation letter: