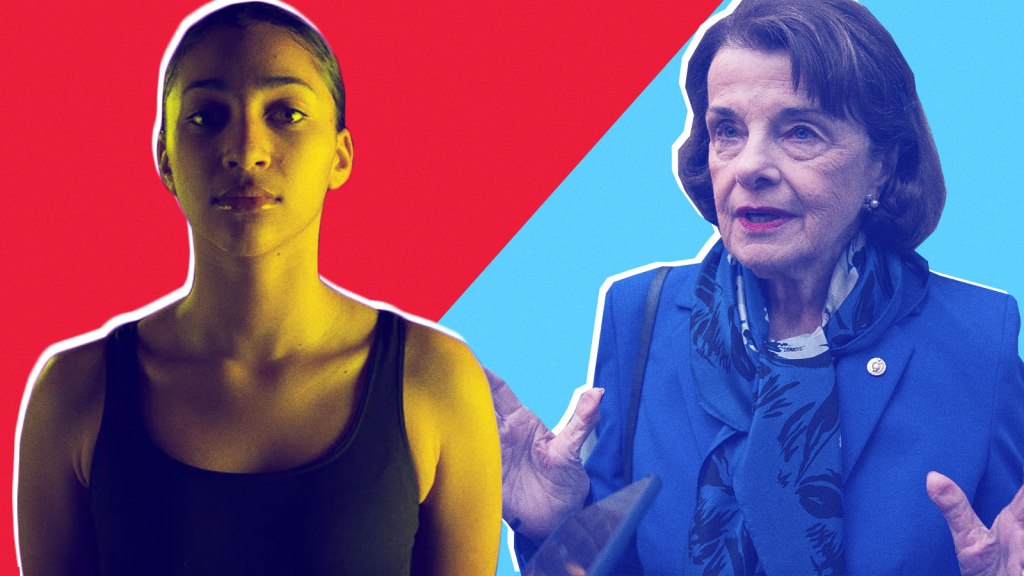 Isha Clarke, a junior at MetWest High School in Oakland, California, was one of about a dozen young people who confronted Senator Dianne Feinstein in an attempt to convince her to endorse the Green New Deal resolution proposed earlier this month by Representative Alexandria Ocasio-Cortez, a Democrat from New York, and Senator Ed Markey, a Democrat from Massachusetts.

The group went into the meeting with high hopes. They emerged disappointed but armed with footage that enraged many in the online environmental community who believe the U.S. needs to remake its economy to tackle climate change.

An edited video of the encounter in the foyer of the California Democrat’s San Francisco office went viral on Twitter over the weekend. A longer version ends with the senator promising Clarke an internship, a reflection that Feinstein, who has been in office for three decades, knows “how to play the game,” according to The Atlantic’s Caitlin Flanagan.

Article continues below
More in this series
Meet the other Greta Thunbergs at the first-ever U.N. Youth Climate Summit
‘We’re not alone’: Thousands of NYC students join Greta’s climate strike
‘The trees say F you’: Why teens are cursing about climate change
These kids are striking for their school to cut its carbon footprint

Clarke is a member of the climate group Youth vs. Apocalypse, a young people-led organization under the umbrella of the Bay Area’s chapter of the climate advocacy group 350.org. (Editor’s note: Grist board member Bill McKibben is 350.org’s founder.) She was invited to speak at a rally outside of Feinstein’s California office organized by the Sunrise Movement, a youth-led climate activist organization, and attended by social justice outfit Bay Area Earth Guardians. She then joined the Earth Guardians and Sunrise activists when they met with Feinstein in her office.

Grist caught up with Clarke on Monday to discuss the online reaction to the Feinstein meeting, the Green New Deal resolution, why she’s fighting for climate justice at the tender age of 16, and of course, the internship the senator promised her. (This conversation has been edited for clarity.)

Q. What was your impression of Senator Feinstein’s reaction to your request?

A. Our feeling about the whole interaction was really bad. At the end of the day, it’s not about her, it’s not about her tone or her reaction, it’s about her vote. We’re focusing on the fact that we went there to ask her to vote yes on the Green New Deal because that is the most important thing. We’re not really concerned with all the other stuff. It’s sort of becoming a distraction, you know?

Q. Did you expect her to say, “Yes I support the version of the Green New Deal” when you confronted her?

A. Yes. We really just wanted her to say that she was in solidarity with us — and that when it comes to her time to vote she would vote yes. I didn’t know that she necessarily opposed it, but I knew that she hadn’t made up her mind yet. I was there to get her to be on the side of “yes.”

Q. Senator Feinstein handed out copies of what she referred to as her “own Green New Deal” during that meeting. What did you think of it?

A. It’s simply not bold enough, and it doesn’t align with science. It doesn’t talk about fracking or offshore drilling, green jobs, or transportation. I also don’t think it takes a bold enough stance on economic or racial justice. It’s really just a watered-down version of the Green New Deal.

Feinstein made the argument that she didn’t think that AOC’s Green New Deal would pass, but quite frankly, neither will her resolution. If we’re going to be offering something to Congress it needs to be something bold. Honestly, right now, it’s more about getting our politicians to take a serious public stance on the Green New Deal and start building the momentum so that when [Democrats] do take back the Senate, and we have more of a political force, we can go right into the Green New Deal. We know that it might not pass but it’s about solidarity.

Q. Did you ask Feinstein for the internship or did she offer it?

A. After the whole interaction, we were leaving and I wanted to bring it back to the purpose [of the meeting], and thank her for her time, because I recognize that she’s a busy lady. She said, ‘Thank you and I really want you to have an internship here so you can understand what it’s like and understand all of the nuance and things like that.’ And then she started to walk away, and I wanted to hold her to that. I mean she just offered me an internship, so I was the one who asked her how I would do that. And the cameras had started walking away so they only heard me asking for the internship. But she had actually brought it up, and I was just following through.

Q. Has her office reached out since Friday?

A. They haven’t reached out. I have their business card. I’m still debating on whether or not I’m going to take [the internship]. It’s a complex situation. The reason why I would take the internship is because I think it’s an incredible opportunity. To be blunt, you have to learn how to play the game to change it. So I think it is a super cool way to be able to do that, and to learn the ins and outs. And I think that it’s also important to have my voice be in the room.

But I wouldn’t take it for a couple of reasons. No. 1: I don’t know what the internship actually entails. Sometimes high school students just do paperwork, and that’s not what I’m interested in. But mostly it’s because I don’t want my having an internship with her to turn into a justification for the whole situation. It’s already kind of being used like that. People are saying, ‘There was a happy ending, and Senator Feinstein offered a girl an internship and whoopdeedoo.’ And I don’t want me having a position there to be a way to cover up everything that just happened.

Q.You have spoken out about gun reform in the past. Now you’re talking about climate. As a politically-active student with limited time, how do you decide which issues to fight for?

A. I am a young woman of color, so I feel drawn to a lot of issues. Part of the reason why I’m working on the Green New Deal right now is because I think it is the most intersectional plan that I’ve seen ever, and it really excites me that I can work for everything I believe in in this one deal. It encompasses economic justice, climate justice, racial justice, women’s rights, LGBTQ+ rights, all of that can be part of the Green New Deal.