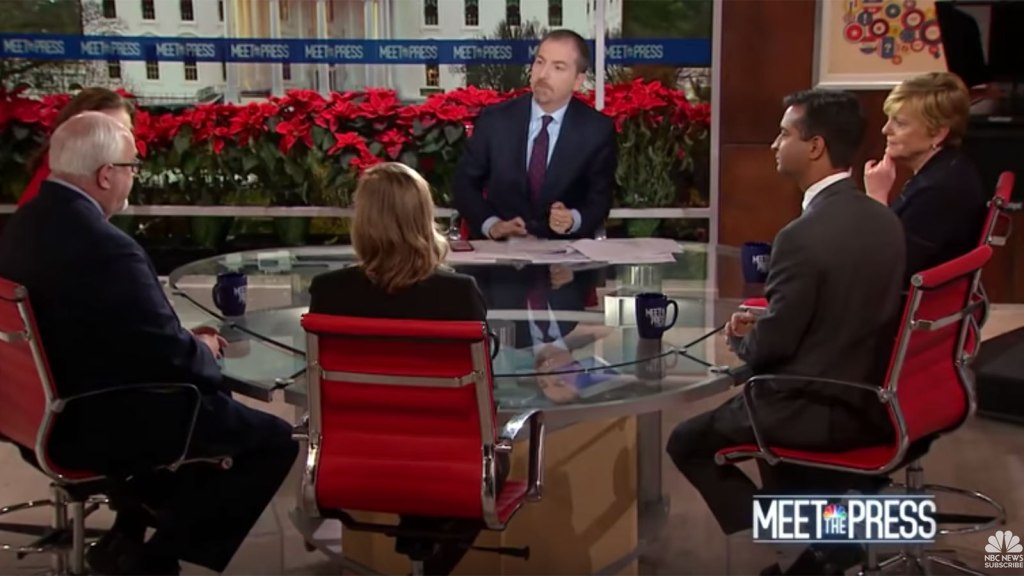 On Sunday morning, NBC’s Meet the Press did what no other weekend news program had ever done before: They discussed climate change for a full hour.

Host Chuck Todd led off the hour with what amounted to a bold line in the sand: Climate denial is no longer welcome on our airwaves. It’s a statement that hopefully sets the tone for media coverage as a new year begins and 2020 presidential campaigns gets underway. It was a glimpse of what it would look like if we took climate change seriously.

Although an episode like this was a long-time coming and the debate itself was a little underwhelming (and maybe the show’s forward-looking ban should have come with an apology for past sins), it was still a watershed moment for the media when most shows have long-ignored the most important issue facing humanity in our collective history. And it was refreshing to see a real-life climate scientist speaking freely about the urgency of our present moment and unimpeded by stale talking points.

If you break down the 60-minute episode, solutions-focused politicians took up most of the time. The show focused on long interviews with outgoing California Governor Jerry Brown and ex-New York City Mayor Michael Bloomberg — past and (maybe) future presidential candidates who have devoted large portions of their careers to addressing climate change head-on. The only member of Congress to appear on the program was Republican Carlos Curbelo of Florida, who will give up his congressional seat in three days.

Notably absent from the conversation were direct voices from the current generation of climate leaders — Representative-elect Alexandria Ocasio-Cortez, who helped change the national conversation on climate change by advocating for a Green New Deal during the last half of 2018, and young Sunrise Movement activists who, in a tweet, claimed partial credit for the show’s topical focus. As a result, the episode barely mentioned bold science-based policies to rapidly decarbonize the global economy.

Still, since talking about climate change is the most important thing any of us can do about it, the show was significant. It amounted to a call-to-action for the media: Debates over the science of climate change are no longer welcome. It’s high time to focus on solutions. We also need to be thinking about the kinds of climate conversations we should be hearing in the next election cycle.

The New York Times’ David Leonhardt made the claim on Sunday that climate change was the biggest story of 2018. If that’s true, then this Meet the Press episode was a signal to candidates like Elizabeth Warren, who have yet to endorse officially the Green New Deal, to pay even closer attention to the issue.

Update, January 2, 2019: A spokesperson for Warren confirmed to Axios that Warren supports the “idea” of a Green New Deal, building momentum that the suite of policies will be a major topic of conversation as the 2020 campaign for president rolls on.