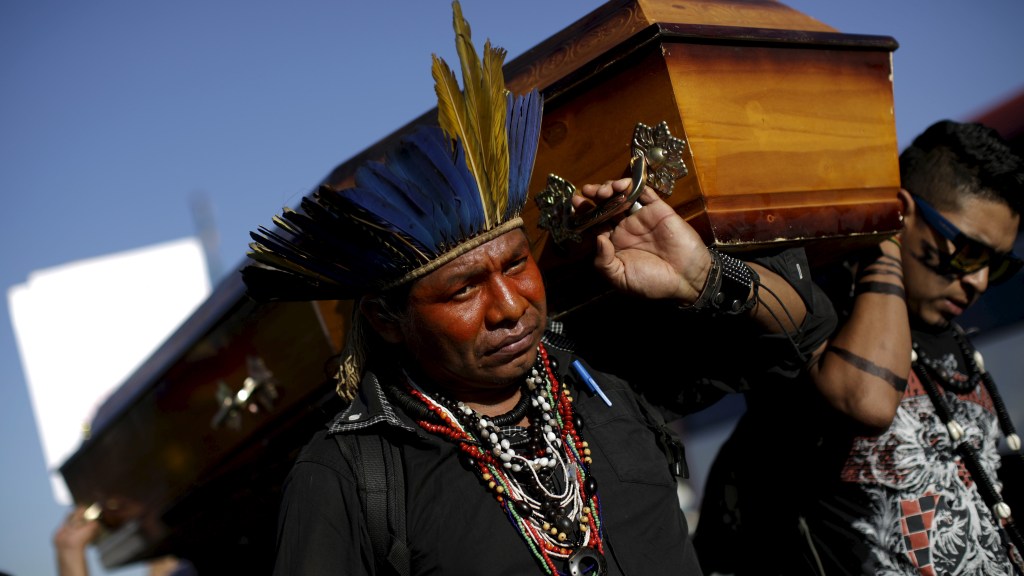 Indigenous leaders protest with a coffin against the murder of the leader of the Guarani Kaiowa ethnicity, Semiao Vilhalva. REUTERS/Ueslei Marcelino
Uncategorized

In Brazil, the biofuel industry is booming. In 2013-2014, the country produced 7.3 billion gallons of ethanol from sugarcane — second only to the United States. Biofuel has been hailed as a type of renewable energy that will save us from the destructive depths of hell that is fossil fuels, and Brazil has been described as a model for other countries.

However, many of us know that using ethanol on such a large scale raises concerns of its environmental impact. The biofuel industry boom has resulted in rainforest deforestation and is contributing to the world’s high greenhouse gases. The demand in Europe and the United States for biofuel has also been fueling land grabs across the global South. Brazil is no exception.

The Guarani people — the largest indigenous group in Brazil — are all too familiar with the destructive side of the biofuel industry. For decades, cattle ranchers have taken over land ancestrally belonging to Guarani tribes to manage large-scale sugar cane plantations. In recent years, the ethanol production from sugarcane has resulted in large profits for ranchers. The profitability has no doubt incentivized the ranchers to hire armed men to guard their plantations.

The Guarani people are inextricably tied to their land — and losing it means losing their livelihoods and their way of getting food and commodities. Many now live on the side of highways in roadside camps or in reserves that are often overcrowded and rife with malnutrition. In the past, Amnesty International has reported that the Guarani people have been victims of forced labor on sugarcane plantations. The situation is part of the reason why the Guarani people have one of the highest suicide rates in the world.

So it’s not surprising that the Guarani people have been fighting to reclaim their land. This summer, in particular, Guarani tribes of the Guyra Kambi’y and Nanderu Marangatu community have re-occupied their ancestral lands in Central and Western Brazil. But whenever they reclaim small parts of their land, they face an escalating threat of violence from ranchers and their hired armed guards.

Since 2003, 209 Guarani-Kaiowá people have been killed due to the conflict with agribusiness and sugarcane plantations, according to the United Nations. On Aug. 11, with a heightened level of concern that indigenous groups would be evicted, Victoria Tauli-Corpez, a United Nations indigenous rights expert, called on Brazil to protect the Guarani people from being forcibly evicted from their homes. “Reportedly, militias are being deployed to attack and intimidate communities in a campaign to spread psychological terror and ensure the communities comply with the eviction,” the U.N. press release stated.

But protection didn’t come. On Aug. 29, Survival International reported that Semião Vilhalva, a Guarani leader of the Nanderu Marangatu community, was assassinated after private armed guards surrounded his home. A week later, Survival International reported Guarani people of the Guyra Kambi’y community were driven from their home with gunshots — and after some community members escaped, their homes and belongings were set on fire.

And last week, on Sept. 18, ranchers kidnapped the Guarani Indians of the Pyelito Kuê community when they attempted to re-occupy their land two days before. “It’s terrible here,” Marcio Guarani, the community leader, told Survival International. “The gunmen attacked us in the middle of the night. They burned all our belongings. They shot at us. Some of my relatives were injured and many people fled. I don’t know where or how they are now. We’ll do everything it takes to get our land back. We will not give up.”

Meanwhile as biofuel and agriculture companies such as Cargill, Alcool Vale, and Biosev brag about the wonders of renewable energy, Survival International tells us that they are sourcing their sugarcane from the Guarani region of Brazil. In recent years, Shell-owned Raizen (an energy company that produces ethanol) has come under fire for their plan to source their sugarcane from Guarani territory in Brazil. But many other companies, some U.S.-based, also operate in the region. According to Survival International, Bunge, an agribusiness corporation headquartered in New York State, is a major buyer of sugarcane from the Guarani territory.

“It’s time the government mapped out the Guarani’s land once and for all, as its constitution obliged it to do by 1993,” Sarah Shenker of Survival International told Grist. “Only once they are back on their ancestral land can the Guarani possibly be free from the constant threat of attack and assassination. Until then, they are stuck in this fatal state of limbo in what has become Brazil’s worst humanitarian crisis.”