Record rainstorms across the U.S. in the past year have continued to make national news, causing billions of dollars of flood damage and killing dozens. But what has barely made headlines is that these floods often cause massive overflows of untreated sewage into streams, rivers, bays, canals, and even streets and homes. See the full report.

Climate Central has investigated the extent of these sewage overflows. In most cases, we found reports that millions of gallons of untreated sewage were released into streets and waterways. These overflows can have devastating consequences for public health and the environment: They can trigger dangerous outbreaks of waterborne diseases and are often linked to fish kills. And when sewage overflows into homes and businesses, expensive remediation and decontamination is needed to make them safe again. 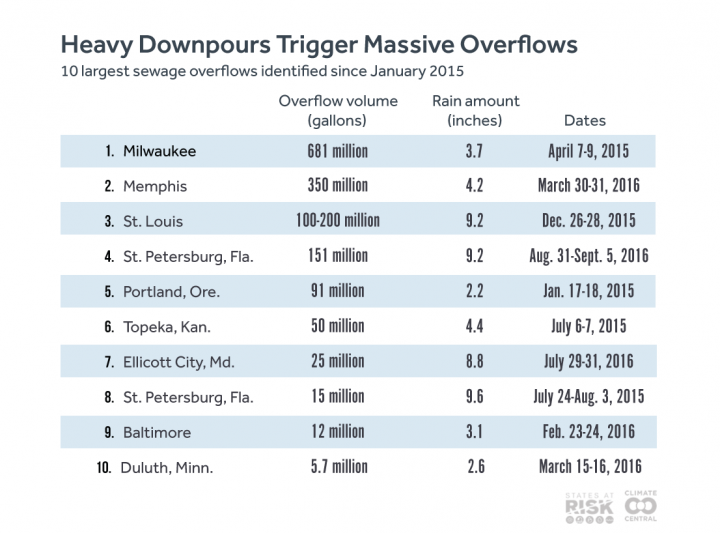 Worse was the discovery that the true extent of sewage overflow is often undocumented and largely unknown.

From the 70 sewage overflows we identified that had occurred in the past 20 months, overflows of more than 1 billion gallons combined were reported, triggering health warnings in dozens of cities. Local officials confirmed that these reported volumes are likely underestimating the true extent of overflows; during these flooding emergencies, there is typically no reliable way to determine how much untreated sewage gets into the waterways.

With a backdrop of antiquated and overpopulated sewer systems, the increase in rain and heavy downpours in recent decades — one of the ongoing impacts of climate change — continues to trigger overflows that affect millions of Americans every year.

While many cities are working toward upgrading their sewer systems, they can’t eliminate their sewage overflow risks entirely. Climate models project that both overall precipitation and the amount of rain falling in heavy downpours will continue to increase this century with continued climate change, which could cause even more overflows. 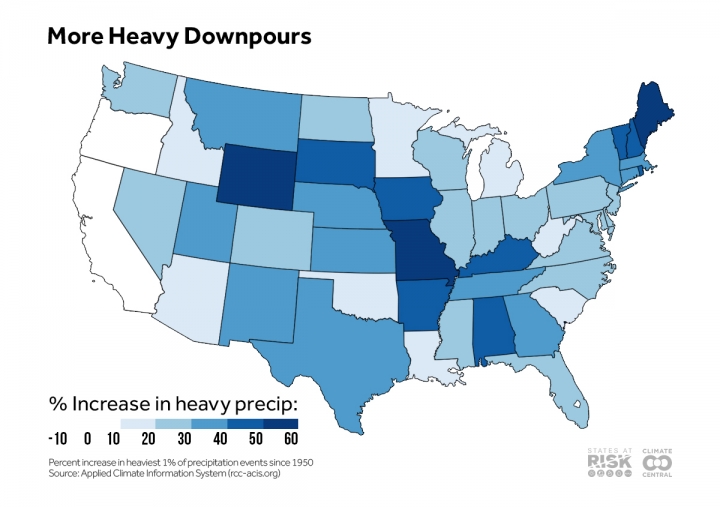 According to the National Oceanic and Atmospheric Administration (NOAA), the epic rains in Louisiana in August 2016 that flooded 60,000 homes and killed 13, were made nearly twice as likely due to carbon pollution in the atmosphere. Climate Central’s analysis of more than 3,000 rain gauges nationwide shows that heavy downpours are happening more frequently than they did in the 1950s. We found that all but two of the Lower 48 states have seen an increase in the number of heavy downpours happening each year, on average, compared to the 1950s, and 28 states have seen at least a 25 percent increase in these heaviest events. With downpours projected to be even more frequent and intense as the world continues to warm, we can expect more of these costly and dangerous overflows for many years to come.