When’s the last time you saw a firefly? Chances are, not recently. And, if you did, you probably didn’t see whole swarms pulsating in the night in the hopes of finding a mate.

Catching fireflies, a favorite childhood pastime, is becoming increasingly difficult. Scientists and outdoor enthusiasts have reported a decline in the bioluminescent beetles in the last few years. Like many other insect species, firefly populations have been dwindling thanks to human encroachment, climate change, chemical use, and light pollution.

This rare species is found only along the Delaware coast. So far, researchers have located just seven habitats, almost all of them smaller than a football field. The firefly is in “imminent danger of extinction,” wrote biologists with the Center for Biological Diversity and Xerces Society for Invertebrate Conservation, two environmental groups, in a petition to U.S. Fish and Wildlife Service last week. They asked the agency to protect the firefly by listing it as endangered.

“The loss of this species would be a great loss to science and our ability to study fireflies, their evolution, behavior, and adaptations to their environments and to climate change,” the groups wrote in their petition. 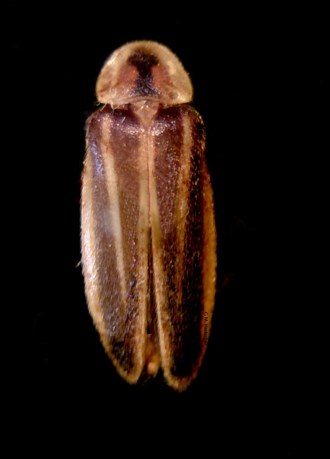 The coastal species is only found in interdunal swales, rare ecosystems that are formed in the depressions between sand dunes on the coast and inundated with freshwater from underground aquifers. The freshwater ecosystems allow deciduous shrubs such as the bayberry, which the fireflies use for shelter and perching, to thrive. But climate change is threatening its habitat. As sea levels rise and storm surges become more frequent, sea water is invading these freshwater swales, increasing salinity and killing the shrubs the firefly depends on.

So how long does the Bethany Beach firefly have left? Let’s crunch the numbers. According to the Delaware Department of Natural Resources, the sea level along the state’s coast has been rising at double the national rate — about 0.13 inches per year. That’s pushed the shoreline back by 16 to 32 feet per year in some parts of the state. The Bethany Beach firefly’s habitat lies just 1.6 feet above sea level and within 320 to 1,650 feet of the shore. So, if current warming trends continue, Delaware’s sea level is expected to rise 1.6 to 4.9 feet by 2100, making it likely that the firefly’s habitat will be submerged within the century.

Additionally, storm surges have led to increased spraying of insecticides to control disease-carrying mosquito populations. The Bethany Beach firefly has a preference for the same pools of water that the state sprays to prevent mosquito breeding, and these chemicals harm fireflies and mosquitoes alike.

But perhaps the most immediate threat to the firefly is a housing development. Conservationists and biologists who study the species are concerned about the Breakwater Beach Development, just north of Bethany Beach, that’s currently under construction in one of the seven known firefly habitats.

“Anything that disturbs the ground can be detrimental to larvae and adult females,” said Candace Fallon, a senior conservation biologist at the Xerces Society for Invertebrate Conservation. “They don’t disperse easily, and they can really be physically crushed during construction. Once the houses are in there, light pollution might affect these species.”

Fallon said she hopes the federal Fish and Wildlife Agency moves quickly to list the species and designate critical habitat for the firefly. Through the petition, she also hopes to raise awareness of the firefly’s plight. “A lot of times during the petition processes, one outcome is that it puts it on people’s radars,” she said. “We saw this with monarch [butterflies]. I hope the community comes together to find ways to protect these species.”