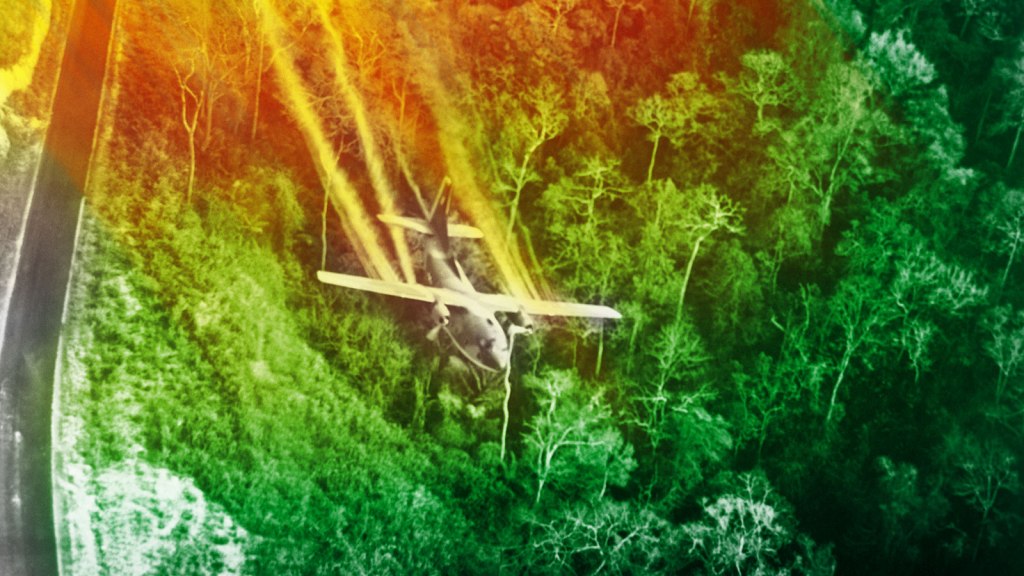 War (huh!) what is it good for? Certainly not the environment.

From the U.S. dropping the herbicide agent orange on jungles in Vietnam to Saddam Hussein’s damming marshes in Iraq, human conflict has often involved the intentional infliction of wounds on both ecosystems and populations. And just as certain acts of violence against people are considered intolerable, a group of researchers has asked that a set of harms against the environment be designated as “war crimes.”

On Tuesday, a team of two dozen scientists co-signed an open letter to international lawmakers urging them to adopt a new addition to the Geneva Conventions, the set of international agreements on the treatment of the victims and prisoners of armed conflict that was negotiated after World War II. The proposed new convention would add certain types of environmental destruction — like the extinction of megafauna and poisoning of water sources — to the list of unacceptable acts.

“The brutal toll of war on the natural world is well documented, destroying the livelihoods of vulnerable communities and driving many species, already under intense pressure, towards extinction,” Sarah Durant, a researcher at the Zoological Society of London and one of the signatories, told The Guardian.

The four existing Geneva Conventions and their three additional protocols are globally recognized treaties to regulate the conduct of war, including establishing standards under international humanitarian law for the treatment of wounded troops in the field, soldiers shipwrecked at sea, prisoners of war, and civilians. Violating the treaties is tantamount to a war crime.

“[T]he military industry must be held more accountable for the impact of its activities,” the letter reads. And while it’s natural to focus on a war’s immediate cost to human life, environmental acts of destruction can lead to long-term pain and suffering that lasts many years beyond the conflict.

This isn’t the first time scientists are calling for a fifth convention. A mix of environmental and human rights concerns arose after the 1991 Gulf War when Saddam Hussein’s retreating troops torched hundreds of Kuwaiti oil wells and the United States dropped bombs and missiles containing depleted uranium on Iraq.

As The Guardian reported in 2014, “Researchers have suggested the radiation from these weapons has poisoned the soil and water of Iraq, making the environment carcinogenic.”

But the idea dates back to the Vietnam War. In order to flush out guerilla fighters, Americans stripped the leafy jungle greens with defoliants including the infamous Agent Orange — a forest-clearing herbicide that has been linked to severe birth defects decades after exposure. The Vietnam Red Cross estimates that Agent Orange has affected 3 million Vietnamese people, including at least 150,000 children. Babies in Vietnam are still being born with birth defects due to Agent Orange.

Similarly, in the 1990s, both sides of the Rwandan and Congolese conflict cleared vast swaths of vegetation that the trees could no longer conceal an attack. 720,000 Rwandans were forced to move into refugee camps on the fringes of a national park, which was stripped bare and turned into shelters and firewood.

And also in the early 1990s, Saddam Hussein struck again: He dammed and drained many of Iraq’s famed marshes to punish the rebellious tribesmen who lived near them. By the year 2000, that series of dikes and channels had reduced the country’s marshland to less than 10 percent of their original area, transforming the landscape into a parched desert. Local temperatures increased by 9 degrees Fahrenheit. (After Hussein’s overthrow, locals tore down many of the dams, undoing some of the damage.)

Scientists have a chance to convince U.N. leaders later this month

Environmental war casualties are clearly nothing new, but the scientists’ open letter to lawmakers is purposefully timed. The argument comes just ahead of a meeting of the United Nations’ International Law Commission, which will occur at the United Nations Office in Geneva, Switzerland, later this month.

“We hope governments around the world will enshrine these protections into international law,” Durant said. “This would not only help safeguard threatened species, but would also support rural communities, both during and post-conflict, whose livelihoods are long-term casualties of environmental destruction.”