For a good chunk of the country, the weather on Election Day is going to be a mess.

Monday night was a rough one for severe weather across the South: Four tornadoes struck parts of Louisiana, Alabama, and Tennessee. One person died. The National Weather Service expects another round of strong thunderstorms on Tuesday for a much wider area, from northern Texas all the way up to southern New Jersey. A mix of rain and snow will stretch from Washington state to New England.

There’s a conventional wisdom that when the weather gets gnarly, only the most dedicated voters will trudge to the polls. Bad weather tends to decrease voter turnout, and traditionally favors Republicans — an older, whiter demographic has more flexibility to brave the elements and vote.

Update: Even if people make it to the polls, the weather might still affect their ballots. In a few spots around the country — New York City, North Carolina, and Alabama — prospective voters are reporting problems with polling machines and ballots that officials are blaming on today’s wet weather. Counting machines are reportedly being jammed by wet ballots in New York City, where the wait to vote can be as long as three or four hours. In response, the NYC council speaker called on the board of elections executive director to resign.

But in this era of widespread early voting and fired-up millennials, it’s an open question on how much of an effect this year’s bad weather will have. As of Monday, more people have already voted in this year’s midterms than did in the entire 2014 midterm election. (And, the weather will be just fine from California to Ohio.) 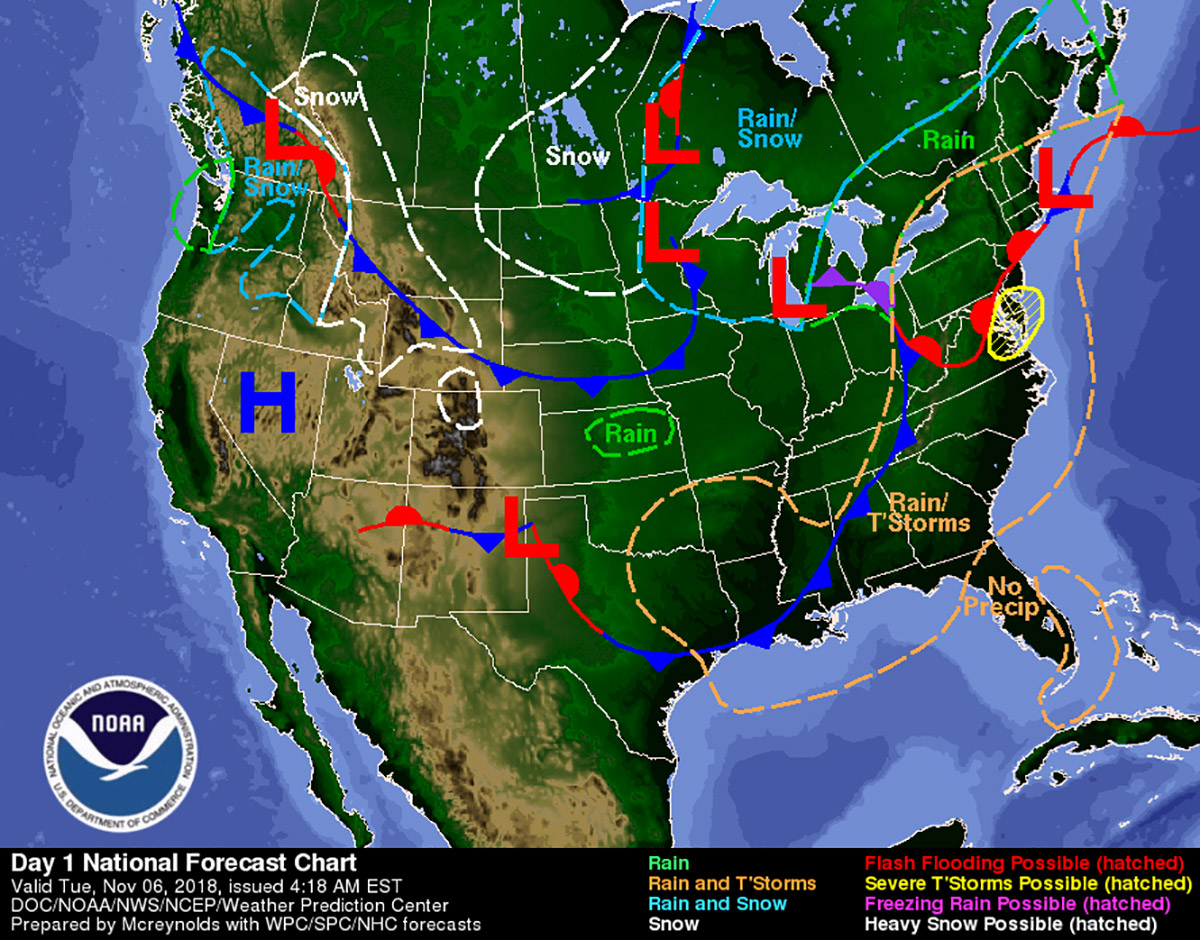 This week’s unpleasant weather across the South and East isn’t unusual for this time of year, but — depending in part on the results of Tuesday’s election — more severe weather could become even more common in the years to come for that part of the country. And maybe, just maybe, the bad weather will bring voters’ thoughts back to the looming, existentially challenging problem that risks society itself within our lifetimes?

There’s a growing scientific consensus that “tornado alley” — the most likely region for severe weather in the United States — is shifting eastward because of climate change. A new study, citing that shift, predicts a huge increase in tornado-related disasters as a result. More people live in the triangle between Louisiana, North Carolina, and Illinois (the region that’s experiencing the biggest increases) than in Texas, Oklahoma, and Kansas. While the overall number of tornadoes in the United States doesn’t seem to be changing, the eastward shift means the same number of tornadoes is affecting more people and doing more damage.

“This completely redefines annual tornado activity in the United States,” said Ernest Agee, an atmospheric scientist at Purdue University and lead author of a similar paper in 2016, in a statement.

Climate change is expected to simultaneously dry out the central Great Plains and make the atmosphere over the Southeast more conducive to tornado formation, with the key ingredients of moisture, warm air, and spinning winds coming together more often.

There’s also emerging evidence that recent extreme weather events do affect opinions on climate change, but only temporarily. This year’s devastating hurricanes in North Carolina and Florida might still be within the window to keep voters’ minds on the most important challenge of our lifetime.