On a Saturday morning in December, Henry Warwick trudged through the slushy streets of Toronto, Canada, to attend an event at the University of Toronto’s towering Robarts Library. He took the elevator to a room on the fourth floor where 150 people — mostly IT specialists, hackers, scholars, and activists — had assembled for the auspiciously titled “Guerrilla Archiving Event: Saving Environmental Data From Trump.”

For the rest of the day, the group would comb the internet for key climate and environmental data from the Environmental Protection Agency (EPA). A giant computer program would then copy the information onto an independent server, where it will remain publicly accessible — and safe from potential government interference. Warwick, an American immigrant to Canada who teaches media studies at nearby Ryerson University, had gray hair pulled back in a ponytail and a somewhat disheveled, frenzied look. “Say Trump firewalls the EPA,” pulling reams of information from public access, Warwick said. He glanced up from his laptop, his blue eyes widening. “No one will have access to the data in these papers.” 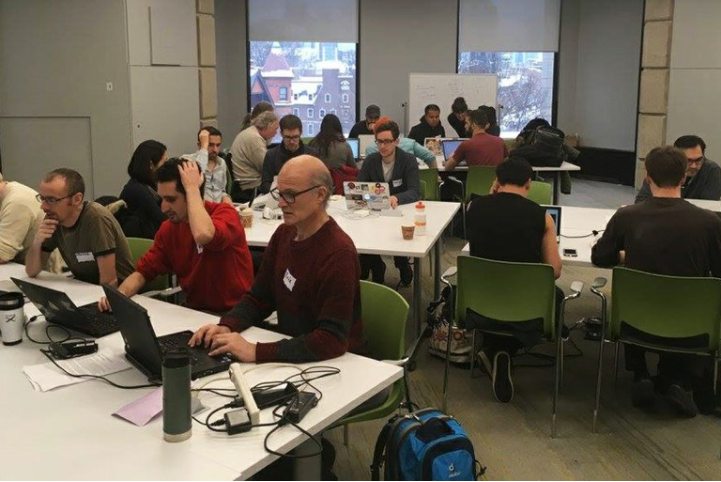 People work on identifying and archiving datasets with information about climate change at the Guerrilla Archiving Event in Toronto, Canada. Technoscience Research Unit/University of Toronto

President-elect Donald Trump and his team have made no secret of their hostility toward environmental science. Soon after the election, Trump appointed Myron Ebell to lead the EPA’s transition. Ebell has worked for years to stoke doubt about climate science and is one of the most vocal opponents of the EPA’s plan to lower carbon emissions from power plants. Then Trump picked Scott Pruitt, another climate change denier who has frequently sued the EPA, to lead the agency. Two of Trump’s advisors also criticized NASA for its “politically correct environmental monitoring” of climate change. They suggested that NASA would prioritize deep-space research rather than “Earth-centric work” under Trump. Trump’s team also asked Department of Energy officials for names of employees who worked on climate issues, raising fears that those employees might somehow be targeted.

These moves worried many scientists. Would the Trump administration suppress or even tamper with decades of government data to serve its political agenda? So an international group of researchers decided to do what they could to protect existing data. They formed the Environmental Data & Governance Initiative to coordinate data-saving efforts. With two colleagues, Michelle Murphy, director of the University of Toronto’s Technoscience research unit, spearheaded the first archiving session, laying the groundwork for similar events in Philadelphia, New York, and Los Angeles before Trump’s inauguration.

“Unless we have good research and monitoring about our ecosystem,” Murphy said, “we’re going to be blinded about our future.”

Political assaults on scientific data are not unprecedented. Canada’s last prime minister, Stephen Harper, closed entire libraries in the Department of Fisheries and Oceans in 2013. An almost entirely non-digitized 600,000 volume collection of aquatic research dating to the 1880s was tossed into dumpsters. The George W. Bush administration used similar tactics, shutting down some of the EPA’s research libraries, which triggered a lawsuit. Days after the Toronto event, Wisconsin’s Department of Natural Resources removed all references to rising temperatures and the human activities that cause them from a webpage about the Great Lakes.

By 10:30 a.m., everyone was working. Some clustered in groups, talking strategy, while others sat alone, staring intently at their screens. Trump may be American, but the information his administration will gain control of — about air and water and the health of the planet — is a global resource. “Personally,” said one volunteer, who asked not to be named, “I’ve always thought that everyone in the world should get a vote in the U.S. election.”

U.S. government websites warehouse a daunting amount of data and information — so much that guerrilla tech geeks probably can’t back it all up before Trump takes office. It takes a lot of work to maintain data and to keep it publicly accessible, work that might not get done if agencies are starved of funding. “We’re in a race against time,” explained Murphy. 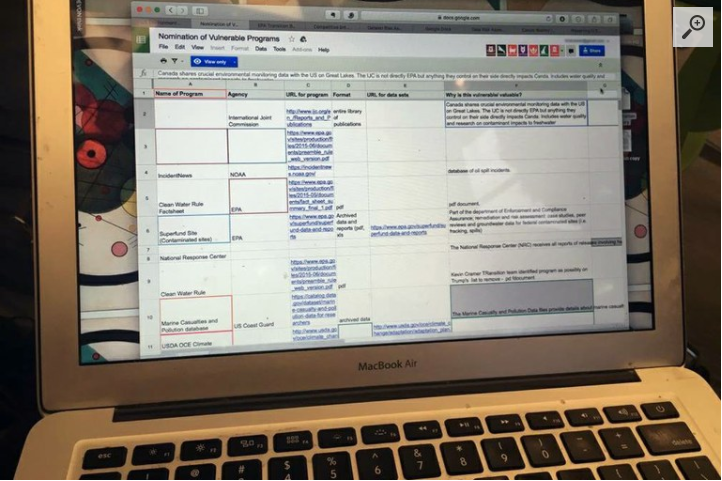 A list some of the government agencies that could be vulnerable to change or losing climate data under the Trump administration. These spreadsheets help people find important data to archive for safekeeping. Technoscience Research Unit/University of Toronto

Those webpages include data from taxpayer-funded scientific research; interactive tools such as NOAA’s Sea-Level Rise viewer, which visualizes future impacts from rising oceans; and EPA maps of the country’s worst polluters. The government relies on this information to make policy — decisions that directly affect everything from a community’s air and water quality to the trajectory of global climate change.

“The idea that someone would just suppress all of that just drives me crazy!” Dorothy Birtalan exclaimed, leaning back in her chair and wringing her hands. Birtalan, an IT consultant with shoulder-length silver hair and dangly earrings, was scrolling through EPA websites looking for research that Murphy and others had identified as vulnerable, including datasets related to programs like the Clean Power Plan that the next administration has explicitly threatened.

For Warwick, potential attacks on environmental data felt personal. He grew up in Edison, New Jersey, playing around abandoned factories and a toxic waste dump that later became one of the state’s largest superfund site: the Kin-Buc Landfill. The EPA discovered that large quantities of PCBs were dumped without proper containment, leaching into a creek that feeds the local water supply. Upon graduating high school, Warwick made good money selling home water filters.

At the archiving event, Warwick decided to focus on researching agencies that are exclusively science-based, like NASA. He worries about the persistence of NASA’s fleet of Earth-observing satellites, which are crucial for gathering data on everything from greenhouse gas concentrations, to retreating glaciers, to shifting rainfall patterns around the globe.

“Somebody has to be there to run the computers,” Warwick said. He was heartened somewhat by California Gov. Jerry Brown’s pledge that California would “launch its own damn satellite” in the event that Trump follows through on an advisor’s call to axe NASA’s $2 billion Earth Science Division.

At one o’clock, Murphy announced that pizzas had arrived and Warwick and others trickled into the hallway. A few mingled, while others grabbed a few slices and headed back to their computers and ate silently, their faces illuminated by the glow of screens. The clock ticked: In exactly 35 days, Donald Trump would be sworn in as president of the United States.

How Trump and Congress might undermine climate action in states