The Green New Deal lost in the Senate, but it wasn't necessarily a fail for Democrats 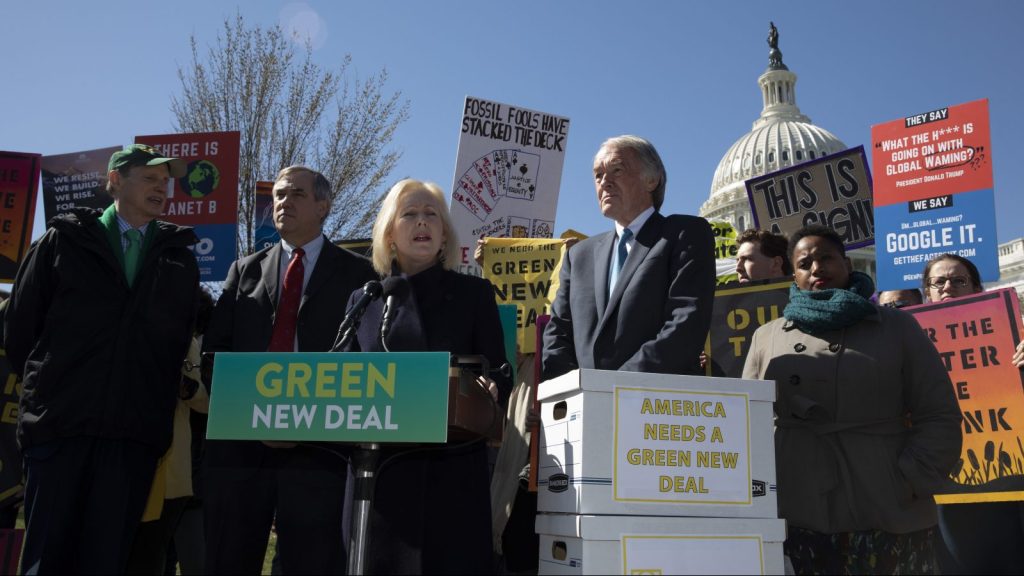 The Green New Deal lost in the Senate, but it wasn’t necessarily a fail for Democrats

A non-binding resolution for a Green New Deal failed to pass a procedural vote on the Republican-controlled Senate floor today to the surprise of pretty much no one. It failed 0-57, with 43 Democrats voting “present” to protest. Senate majority leader Mitch McConnell had intended to crack Democratic unity by forcing an early vote, making middle-ground representatives declare their intentions. But instead, the vote petered into yet another round of partisan bickering.

Republicans were united in voting down the ambitious resolution, which beyond setting ambitious climate goals, included even more hot-button calls to action like guaranteed jobs, housing, and healthcare for all. And while not all Democrats are down with some of the more left-wing elements of the proposed legislation, they were able to skirt the issue by largely voting “present” rather than coming out with a hard “aye” or “no.” In this way, the Dems were able to avoid making the Green New Deal a wedge issue between centrists and the most left-leaning members of their base.

Ahead of the vote, McConnell tweeted, “The American people will see which of their senators can do the common-sense thing and vote ‘no’ on this destructive socialist daydream.” The vote also set up Democrats to go on the record about the Green New Deal ahead of 2020 elections, essentially catching them in the act of supporting what McConnell called “a destructive socialist daydream.”

And they’ll see which senators are so fully committed to radical left-wing ideology that they can’t even vote “no” on self-inflicted economic ruin that would take a sledgehammer to America’s middle class.

The resolution was unveiled in February by Senator Ed Markey of Massachusetts and freshman Representative Alexandria Ocasio-Cortez of New York. It’s backed by a growing and vociferous youth contingent that is pushing established Democrats to get tougher on both fossil fuels and racial and economic inequity. The Green New Deal encompasses a broad swath of policies aimed at transitioning to a green economy that simultaneously empowers workers and the communities most affected by fossil fuels. The resolution has yet to come to a vote in the House and remains a somewhat nebulous set of aspirations. It has, however, created a sense of urgency around crafting ambitious legislation to curb global warming.

Democrats criticized McConnell for rushing a vote without more scrutiny and dialogue. Ocasio-Cortez reportedly told Vox reporter Ella Nilsen today that, “What McConnell’s doing is that he’s trying to rush this bill to the floor without a hearing … without working through committee — because he doesn’t want to save our planet. Because he thinks we can drink oil in 30 years when all our water is poisoned.”

AOC: “What McConnell’s doing is that he’s trying to rush this bill to the floor without a hearing … without working through committee — because he doesn’t want to save our planet. Because he thinks we can drink oil in 30 years when all our water is poisoned.”

“Today Leader McConnell will follow through on one of his specialties, ‘gotcha politics,’” Senate minority leader Chuck Schumer told his colleagues ahead of the vote. “Republicans want to force this political stunt to distract from the fact that they neither have a plan nor a sense of urgency to deal w/ the threat of climate change.”

Not all Republicans are simply sitting on their hands when it comes to addressing climate change. Some have put forth alternatives such as the so-called “Green Real Deal” and the “New Manhattan Project for Clean Energy.” The former proposal, circulated by Florida Representative Matt Gaetz, frames climate change as a risk to national security without setting hard targets for carbon reduction. The New Manhattan Project for Clean Energy is a 10-point plan proposed Monday by Republican Senator Lamar Alexander from Tennessee and includes a call for innovation in the realms of nuclear power, carbon capture, solar, biofuels, and fusion.

But although the Democrats’ Green New Deal resolution fizzled out on the Senate floor today, it’s far from gone for good. By voting “present,” Democrats were able to call attention to climate change — bringing up losses from recent floods, storms, and wildfires — without having to publicly argue amongst themselves on how exactly to avoid those threats.

“With this exercise [Republicans] also elevated the issue in a way I’m sure they never intended. And for that I want to thank them,” Schumer said on the Senate floor.

And while some Republicans like Iowa Senator Chuck Grassley have called the Green New Deal and it’s far-reaching aims a “pie-in-the-sky” plan, proponents of the deal aren’t shying away from the resolution’s ambitions on climate or social equity, which many of their youngest and most progressive constituents view as essential.

“This should be our nation’s moonshot,” New York Senator Kirsten Gillibrand said in a press conference Tuesday morning. She’s among the six 2020 presidential hopefuls who co-sponsored the Green New Deal resolution. “We don’t know if we can get to net zero carbon emissions in 10 years, but we should certainly try.”