In his hometown of San Bernardino, California, Miguel Rivera remembers having to spend more than an hour waiting to get a parking spot during the winter holiday shopping rush. But he wasn’t in line at the mall. For more than two years Rivera worked at the local Amazon fulfillment center. During peak season, he would wait in a long line of cars filled with workers arriving for their shifts at the warehouse, alongside a caravan of idling diesel trucks. Once the goods were unloaded, workers like Rivera would sort, scan, and mail to shoppers around the country.

The Inland Empire is arguably the heartland of e-commerce in America. After arriving by ship to Southern California ports, many goods imported from China and other parts of the world are brought to San Bernardino County, located just 60 miles from Los Angeles, for sorting and distribution. Warehouses are big employers here, but Rivera and other residents say they are also bearing the brunt of environmental and health impacts brought on each holiday season and by the growing popularity of online shopping.

“I’m not the biggest fan of Black Friday,” Rivera said. “I personally don’t like how people don’t realize how it affects these lower income communities that have to work to ship their products.” One of the effects he points to is the emissions that come from all those diesel trucks and planes moving goods in and out of the region.

San Bernardino is the county with the worst ozone air pollution in the nation, according to the American Lung Association. Ground-level ozone is created by chemical reactions between nitrogen oxides and volatile organic compounds — both of which are emitted by trucks and other gas-fueled vehicles.

Roughly 40 percent of all goods imported by container to the U.S. come in through the nearby ports of Los Angeles and Long Beach. And more than 75 percent of those items will travel by truck or train through warehouses and distribution centers throughout inland communities like San Bernardino. Warehouses make up nearly 300 million square feet of total building area in San Bernardino County alone (that’s more than 5,200 football fields). And there are still more being built.

One of the proposed new warehouses is the Slover Distribution Center in Bloomington, a rural, unincorporated part of San Bernardino County. The lot where the warehouse is set to be built lies about 60 feet — roughly the distance from a pitcher’s mound to home plate — from Thomas and Kim Rocha’s backyard. The couple, who are both in their 60s, bought their dream home in Bloomington 12 years ago with the hopes of retiring there. 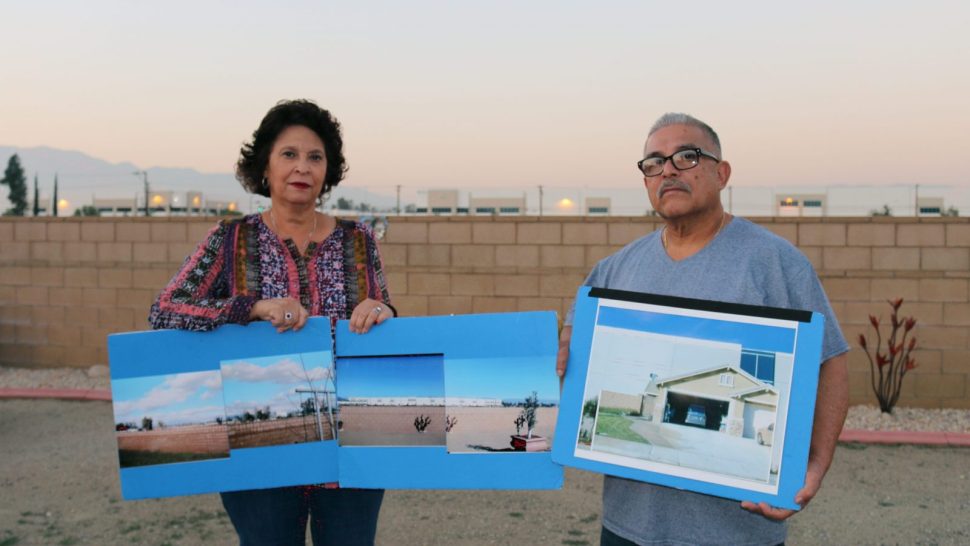 Thomas and Kim Rocha stand in their backyard in Bloomington, California, holding photos of their home. One shows the view when they moved in, another after a warehouse was built nearby, and lastly a rendering for when a new distribution center is built just 60 feet away.  Justine Calma / Grist

Instead, the Rochas are organizing other residents to oppose the planned development — forming a group called Concerned Neighbors of Bloomington. Rocha became especially concerned about his family’s health after watching a report on NBC news late one night about how exhaust surrounding the region’s mega warehouses was making it harder for local children to breathe.

“We learned about the environmental impacts it was going to have on us,” says Rocha. “It’s going to make us sick.”

In his free time, Thomas Rocha says he knocks on neighbors’ doors to keep them informed on what’s happening with the warehouse development, and attends County Board of Supervisor meetings to make sure his concerns are heard.

In September, when the County Board of Supervisors voted on whether to rezone the land behind Rocha’s house for industrial instead of residential use — paving the way for the 334,000-square-foot distribution center — Rocha was one of 40 residents who spoke out that day against the change. He had just learned that morning that his father, who had been suffering from renal failure, had passed away. Rocha still showed up to the meeting. He says his dad would have wanted for him to see the fight through.

Despite the residents’ pleas, the Board of Supervisors voted to rezone the land so that it could be used for warehouses.

Rocha and other residents are still fighting. He has enlisted the help of The Center for Community Action and Environmental Justice, a local nonprofit organization with a long history of fighting polluters in the region. The Center has filed a lawsuit along with EarthJustice against the Board of Supervisors claiming that the environmental impact report for the Slover warehouse does not comply with the California Environmental Quality Act.

Andrea Vidaurre, an organizer at the Center, says that when the holidays roll around, she also thinks about her brother and other family members working overtime in the goods movement industry. “When you’re clicking for that same-day or that two-day delivery, you’re not just paying more for that option…It’s costing communities that live right next to the places that have made it possible.”

Amazon, the biggest employer in the Inland Empire region, responded to Grist via email, saying the company is “committed to sustainable transportation and accelerating the transition to low-carbon commercial transportation solutions.”

The Center for for Community Action and Environmental Justice has pushed for a transition to zero emissions in the goods movement industry as part of the solution to remedying local environmental and health effects, especially as e-commerce continues to grow. Another solution is to consume less and being more mindful of where products come from, Vidaurre says. “[When] we fill up our [shopping] carts, that means that many more trucks in our streets and that many more trucks in front of people’s homes.”

Here’s what everyone gets wrong about the climate report