Despite the jaunty name, Superfund sites are not actually super fun. In fact, they are the opposite. They are hazardous waste sites, and you probably don’t want to raise your kids or park your bounce house near them unless you’re pro-cancer. The first — and most famous — Superfund site was Love Canal, a neighborhood in Niagara Falls, N.Y., where 22,000 tons of toxic waste were buried by Hooker Chemical Company and caused illnesses, miscarriages, birth defects, and death among residents. There are currently more than 1,300 Superfund sites in the U.S., and now, thanks to media artist Brooke Singer, you can more easily find any in your area — and then decide if it’s time to pack your bags and move somewhere less likely to make you grow a tail.

Singer is the creator of ToxicSites, a website and searchable database that catalogs all Superfund sites in the country in real time using data provided by the U.S. EPA. 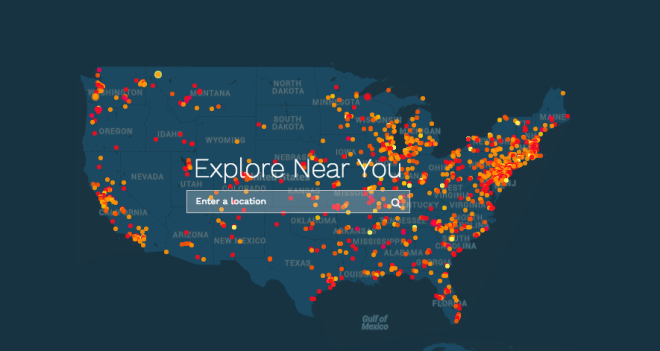 Singer’s interest in Superfund sites started in 2006, when she met Robert Martin, who had served as national ombudsman of the EPA from 1992 to 2002. Martin believed that after 9/11, all of Lower Manhattan should have been designated as a Superfund site, which would have required an immediate cleanup and relocation of all inhabitants (this, obviously, did not happen). Soon after meeting Martin, Singer visited the Quanta Resources Superfund site along the Hudson River in New Jersey. “I drove around in circles trying to find the site, but couldn’t at first because most of these sites aren’t marked out,” she told told Vice’s Motherboard. And this, she realized, was a problem. If people aren’t even aware of where these sites are located, how are they supposed to avoid them? Quanta Resources was next to a daycare center and wasn’t even marked by a sign.

ToxicSites doesn’t just provide names of Superfund sites: It provides a timeline of contamination and cleanup, a list of contaminants and possible health effects, the parties responsible, and census data for impacted populations. ToxicSites also encourages users to post their own stories about Superfund sites. It features video, audio, and photo essays about living in contaminated areas, so you can listen to an audio diary about living in the most radioactive place in New York City or take a tour of polluted Newtown Creek, another site in NYC. This last part — people telling their own stories — is essential to the mission of ToxicSites. “There is nothing like a photograph, or video, to instantly pull a person into a story and linger in the mind,” Singer said in an interview with Hyperallegenic. “A picture is worth a thousand words is a cliché, but still true.”

This tractor runs on BS — but it’s the real, eco-friendly deal