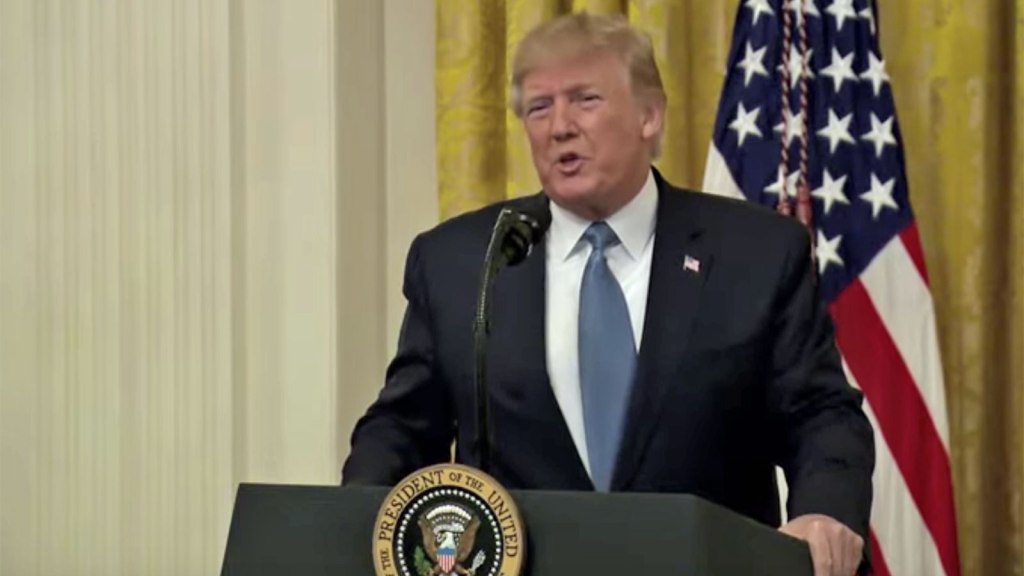 The White House
Hindsight is 2020

Sixty-nine percent of Americans are worried about climate change, and it appears that President Trump is one of them — but not because he’s particularly concerned about the effects of rising emissions. On Monday, the science-averse commander-in-chief delivered some “remarks on America’s environmental leadership.” As extreme flooding in Washington, D.C., drenched the area and even the White House basement, Trump spent the better part of 45 minutes touting his efforts to preserve “our country’s incredible natural splendor.”

Has the president converted from coal lover to clean energy maverick? Not quite. It seems that Trump is trying to scrounge together some semblance of an environmental record as he ramps up his reelection bid. It’s a smart move. Voters in swing districts, particularly in places being hit hard by climate change, have got the environment on the brain. As the New York Times reported, consultants for Trump’s reelection campaign know that if Trump wants to succeed in 2020, he needs to appear responsible on environmental issues.

Alas, Trump doesn’t have many green credentials to show off. If you’re looking for an anti-environmental record, however, Trump is your man. Over the course of his time in the White House, he has threatened to withdraw the United States from the Paris climate agreement, appointed climate skeptics and coal lobbyists to head departments and committees, and attempted to dismantle 83 environmental rules.

The words “climate change” didn’t come up during his environmental address on Monday. Instead, we got a look at the president’s strategy for how he might talk about the environment in the lead-up to 2020. Instead of climate change, Trump focused on conservation: clean air and water, his plans to tackle marine litter, and efforts to reduce the impacts of the red tide on Florida’s businesses.

He belittled President Obama’s climate legacy, calling it “relentless war on American energy,” while claiming credit for the emissions reductions that Obama’s Clean Power Plan helped deliver. He sought to frame climate action as something that would hurt American workers and manufacturing. And he falsely claimed the progressive climate action proposal called the Green New Deal would rack up a $100 trillion price tag (never mind the cost of inaction).

Trump seems to be testing out whether he can brand himself as a conservationist. Can he really claim to protect the environment while also promising to save the American coal industry? More importantly, will voters buy his framing? Climate activists are betting they won’t. “American’s won’t be fooled for a single second,” the Sunrise Movement wrote in response to the event. “The fact that Trump is making this sorry attempt to shore up his environmental credentials shows that he sees the writing on the wall.”