A record number of Americans now grasp that climate change is happening and that it poses a present danger. What’s behind the big change? Believe it or not, President Trump might have something to do with it.

Two public opinion polls out this week show that Americans are beginning to see that global warming isn’t just a problem for polar bears — it’s a hazard unfolding where they live. One from Yale and George Mason University revealed the record level of concern. Another found that nearly three-quarters of Americans say that recent events like hurricanes, droughts, floods, and heatwaves influenced their views on climate change.

Anthony Leiserowitz, director of the Yale Program on Climate Change Communication, pointed to the factually challenged President Trump’s tweets as a possible reason that Americans are finally coming around to the science.

“Because he’s become such a polarizing and divisive political figure, whenever he speaks about climate change, immediately he drives the majority of the country in the opposite direction,” Leiserowitz said. Tweets like this one from over the weekend, for instance, might backfire by leading media outlets to cover the comments and thus raise more awareness:

A total of 73 percent of Americans now accept that global warming is underway, according to the latest national survey from Yale and George Mason. Acceptance has zigged and zagged over time, but this is the highest percentage since the universities started keeping tabs on the data in 2008.

“We’re seeing record-high levels on all the major indicators we’ve been tracking over the past decade,” Leiserowitz said. Sixty-nine percent of Americans now say they’re worried about global warming, more than ever before. The number who are “very worried,” 29 percent, is up 8 points since last March. “We’ve never seen a jump that high in the past decade,” Leiserowitz said.

“What happened since March?” you might ask. Plenty besides Trump’s tweets. We saw Hurricane Florence, Hurricane Michael, and the deadliest wildfire in California history — not to mention harrowing scientific reports, including one that laid out how climate change would hit every single region of the United States.

“One of the clearest and most consistent observations we had is that for many Americans, climate change remains a distant problem,” Leiserowitz said. The recent results suggest that’s beginning to change. About half of Americans understand that climate change made last year’s hurricanes and wildfires worse, according to the Yale survey. The highest-ever proportion, 46 percent, said they’d personally experienced the effects of global warming.

The wild weather we’ve been having lately appears to be shifting Americans’ perspectives on climate change. Sixty-one percent are at least “a little worried” about the effects of extreme heat and flooding in their own backyards, according to the other new poll from the Associated Press-NORC Center for Public Affairs Research at the University of Chicago.

Nearly half of Americans, 48 percent, say they find climate science more convincing than they did five years ago, the poll showed. What’s with that? Lucky for us, the survey asked respondents to pinpoint the factors that had influenced their views on the science. Seventy-one percent pointed to their personal observations of the local weather.

The public is more convinced that climate change could hurt them, their families, and their communities than ever before, the Yale survey shows. Roughly half think they’ll personally be hurt by global warming, but even more think that others will bear the brunt of the damage — especially future generations and the poor. 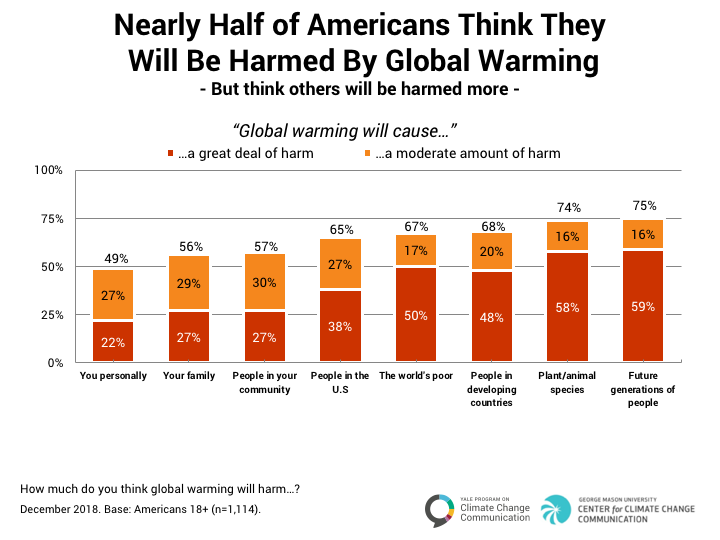 So while it’s heartening that Americans are finally getting a grasp on reality after all these years, there’s a lot of room for improvement. “Look, we’re only at 73 that accept it is real,” Leiserowitz said. “That would be above 95 percent if we’re talking about Japan.”

And still, a total of 59 percent of Americans say they rarely or never discuss climate change with their friends and family. The good news? This number is down from 74 percent last March.

Let’s face it. Despite all the cliches, we Americans actually enjoy talking about the weather — especially weird weather. I mean, I really saw wildfire-induced ash fall from the sky in Seattle last year. As more and more see how climate change is changing storms, heatwaves, and winters, we might just end up slipping it into conversation more often.

Will this human dressed as a receipt convince Californians to ban paper receipts?