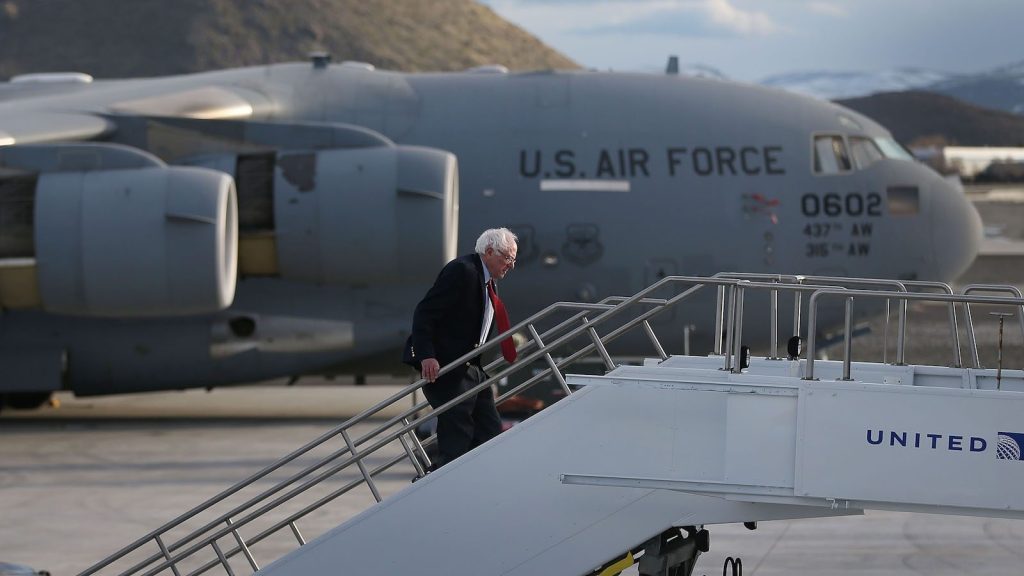 Vermont Senator Bernie Sanders just became the first 2020 presidential hopeful to pledge to offset the entirety of his campaign’s transportation-related carbon emissions. That’s not as innovative as you might think: Buying carbon offsets has been a standard move for climate-conscious candidates for over a decade. Heck, Republican John McCain did the same thing during his 2008 run for the White House.

While buying offsets looks good on paper, there is evidence that the practice is somewhat questionable. After all, it doesn’t require a candidate to change their behavior. Simply offsetting sends the message that it’s OK to pollute as long as someone else cleans it up. (Editor’s note: We reached out to Sanders’ campaign for more details about his plan to go carbon-neutral, and we’ll update this post if we hear back.)

Which brings us to 2019, a world where we’re just a decade or so away from locking in irreversible, civilization-altering climate change. We can’t afford business-as-usual. In a crowded primary where climate change has jumped to the top of voters’ concerns, presidential candidates must be bolder. If there was ever a time to go big on climate, it’s now. Sanders — or whichever candidate wants to be a real leader on climate change — should commit to drastically cutting down on flying.

Sure, candidates need to fly — at least a little bit. The campaign trail is synonymous with frenetic schedules and vast distances between early-voting constituencies. Those candidates with other jobs — senators, governors, mayors — still need to be physically present for votes and duties at home, while also maximizing their presence on the campaign trail.

But those obligations don’t account for the vast amount of flying that happens during political campaigns. In 2016, Donald Trump’s airplane travel alone took up the equivalent carbon footprint of what 500 average Americans use in a year. Hillary Clinton’s footprint during the same time period was about half that. Those estimates include the general election, when candidates crisscross the country almost daily. But focusing on the travel required for a primary campaign, it would be much easier to cut down on those costly (emissions-wise) flights.

All candidates could fly less without greatly sacrificing face-time with voters. This Democratic primary is shaping up to be, in part, a progressive purity test on climate change — and giving cursory attention to transportation, our No. 1 source of emissions as a country, isn’t going to cut it. Candidates should send a clear signal to voters that they are treating climate change like the emergency it is.

Here are a few ideas on how a campaign that eschews frequent flying could work:

Given that candidates spend so much of their time physically traveling, it’s possible that some of these no-fly approaches could mean more quality facetime between the candidate and voters, at a fraction of the carbon cost.

Sanders is a perfect candidate to test this approach: He already spent lots of time in Iowa and New Hampshire during his 2016 presidential bid, and he has a strong existing base and that expects him to lean into his principles. But he isn’t the only one who could benefit from a pledge to fly less. Candidates Elizabeth Warren and Kirsten Gillibrand have recently talked tough on climate change — something like this could set them apart from the crowded Democratic pack. Beto O’Rourke might also be a natural fit: He’s not a senator, so he doesn’t have to rush back to D.C. for votes, and he needs to brush up his climate cred with the Democratic base. As for self-proclaimed “climate candidate” Jay Inslee — who is currently polling about 1 percent — let’s just say this bold move could be a big boost.

Granted, there is an obvious big risk: Republicans won’t do this. And shaking hands definitely counts for something. There’d still be a lot of one-on-one time with a bus-forward presidential campaign, but the candidate would have to skip in-person meetings if they happened to be across the continent and on a moment’s notice.

And what about the general election? What works to mobilize a newly climate-obsessed base in the primary might change as the campaign shifts past the primary. It would be difficult to respond to the aftermath of newsworthy events in person. But as candidate Trump taught us in 2016, media coverage is gold in our news-obsessed culture. If you draw enough attention to yourself, it’s possible to get the boost you need to pull ahead of the pack without spending so much time away from your hometown.

As for the rest of us normals who don’t necessarily have to sprint from state to state, doesn’t that mean we too should rethink the status quo and our impact on the planet?

Yes, that’s exactly the point. A presidential campaign that publicly aims to reduce its travel could serve as an important reminder for us all: The future isn’t going to look like the past. If we act now, it might even be better.