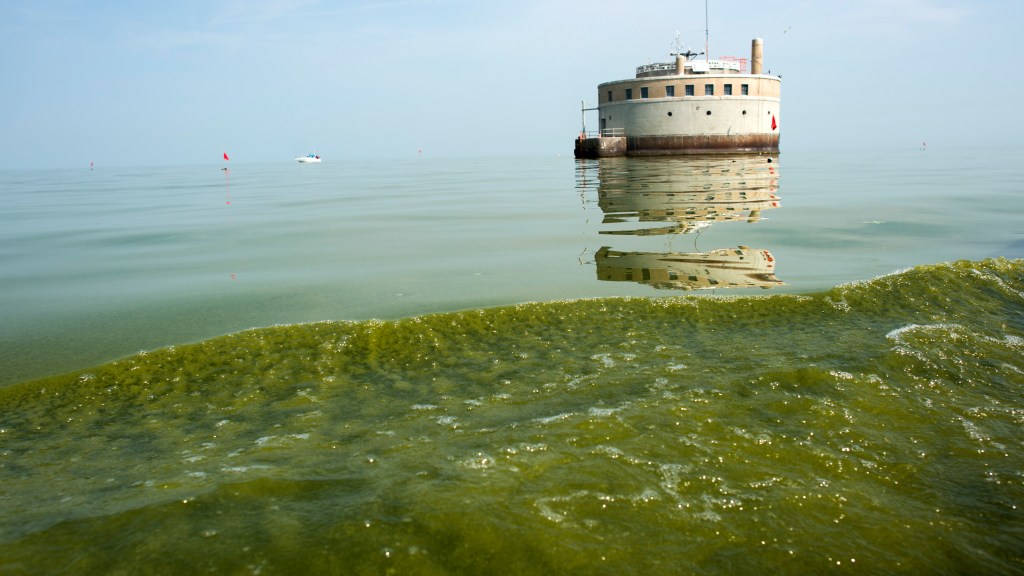 A wake full of green algae just a few hundred feet from the city of Toledo's Water Intake on Lake Erie. Ty Wright / For The Washington Post via Getty Images
Climate Desk

Lake Erie provides drinking water for 11 million people, and an unusual tactic to protect it was just adopted in Toledo, Ohio: On Tuesday, Toledoans passed the “Lake Erie Bill of Rights” in a special election, with 61 percent voting yes on a ballot measure that could allow citizens to sue polluters on behalf of the lake.

“This is the first in the nation in terms of rights-of-nature law being adopted by a municipality over a certain ecosystem, and I think it’s the beginning of more things to come in that area,” said Thomas Linzey, executive director and chief legal counsel for the Community Environmental Legal Defense Fund, which helped local activists draft the bill.

The ballot measure will amend the city’s charter to establish that Lake Erie has the right to “exist, flourish, and naturally evolve.” The goal of giving the lake legal rights, Linzey said, is for activists to be able to do “a survey of who’s the biggest polluters into the lake” and then bring lawsuits “to stop that pollution,” he said.

Runoff pollution is a major cause of Lake Erie’s algae blooms, which can make water toxic to fish, wildlife, and people. This kind of pollution occurs “when rainfall washes fertilizer and manure spread on large farm fields into streams that flow into Lake Erie,” according to the Alliance for the Great Lakes.

Past problems with Lake Erie’s water quality prompted organizers to think about new ways to safeguard it. Back in 2014, the City of Toledo issued an advisory for residents not to drink municipal water after chemical tests found unsafe levels of an algal toxin. The toxic algae bloom left 110 people sick and nearly half a million without tap water. Ohio even declared a state of emergency.

“For three days in 2014, we lost access to our drinking water, and we didn’t see any action come out of that,” Markie Miller, an organizer for Toledoans for Safe Water, told CityLab. “We wanted to do something for ourselves.”

The concept of giving rights to nature originates, at least within the U.S., from an article by Christopher Stone published in 1972 in the Southern California Law Review: “Should Trees Have Standing? — Toward Legal Rights for Natural Objects.” Since then, the idea has gained traction internationally. In 2008, Ecuador became the first country to recognize rights of nature in its national constitution. And in 2010, Bolivia’s legislative assembly passed the “Law of the Rights of Mother Earth.”

The basic principle is that of legal standing: Under the U.S. Constitution, to have standing, one needs to show direct injury to oneself caused by some entity, and there must be some redress, or remedy, that can be found in court. Activists hope that with these new rights, Lake Erie will have standing in court without needing to demonstrate injury to a human.

The fact that Toledoans endorsed such an unusual means to combat pollution reflects an understanding that current regulations aren’t sufficient, said Madeline Fleisher, senior attorney in the Environmental Law & Policy Center’s Columbus office. “The citizens of Toledo are clearly and rightfully frustrated. I understand why they’re trying novel approaches to try to get those issues addressed.” (As is common in local special elections, turnout in Toledo’s was low; just shy of 9 percent of registered voters cast ballots.)

The proposal has been contentious. The board of elections in Lucas County (whose seat is Toledo) voted to block it from the ballot in the November 2018 election. After several months of debate, the board ultimately voted in December to add it to the February special election because of an Ohio Supreme Court decision, as the Toledo Blade reported. One board member said he still believed the measure was “on its face unconstitutional and unenforceable.”

Opponents of the Lake Erie Bill of Rights are concerned about the costs of litigation for farms and businesses. The Ohio Farm Bureau Federation already pledged its support for a lawsuit farmer Mark Drewes filed in the Federal District Court for Northern Ohio Wednesday, challenging the constitutionality of the bill.

“Farmers want and are working toward improving water quality, but this new Toledo law hurts those efforts. Mark Drewes understands this, and it’s Farm Bureau’s job to back his important actions on behalf of Ohio farmers,” the executive vice president of the Ohio Farm Bureau, Adam Sharp, said in a statement.

The suit contends that the measure violates federal constitutional rights, including equal protection and freedom of speech. Additionally, it argues that the bill of rights violates Ohio state law in several ways. For example, it contends that Toledo as a local government cannot override the Ohio state governing structure of Lake Erie, since the Ohio Department of Natural Resources governs the lake under state law.

“One of the biggest challenges that the [Lake Erie] Bill of Rights will have is moving from vision to enactment,” said Cinnamon Carlarne, an Ohio State University law professor. “That is part of a larger conversation trying to advance the role that law plays in protecting ecosystems for a variety of reasons — not the least of which is that we are, as humans, fundamentally dependent on them.”