Between coronavirus and climate change, is it time to go off-grid? 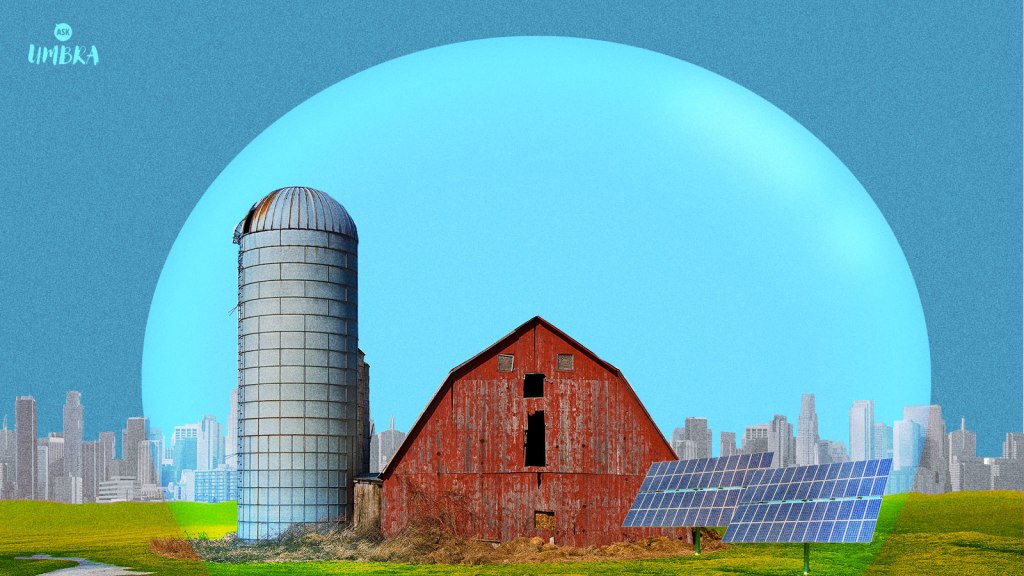 Between coronavirus and climate change, is it time to go off-grid?

The coronavirus pandemic has me feeling pretty isolated, though, on the plus side, I’ve taken up more solo activities. That has me thinking: Would it be better for the planet if we all aim to be more self-sufficient and off-the-grid when it comes to how we live our lives?

The way you view the social upheaval caused by the coronavirus pandemic is a kind of Rorschach test; you can look at it and see whatever you want to see, really. You could see millions of people turning inward, figuring out how to narrow their lives down to the most self-sufficient essentials. Or you could see millions of people so desperate to be with others and feel a sense of belonging to a larger community that they literally risk death to go sit in a crowded bar rather than drink beer alone in their living room.

But subjectivity aside, we should all take a long, hard look at a pandemic that has not been quelled — quite the contrary, in fact. Some of that uptick can be attributed to simple bad luck or stupid decisions, but the bulk of the blame falls on the government entities that should be doing more to protect citizens from a major public health threat. The point is, the social restrictions that keep us safe — and apart — probably aren’t going anywhere anytime soon. So rather than fight them, you seem to be asking: Should we just lean into a life of isolation — or I guess you could call it independence?

It’s an appealing thought in some ways, but as I have argued many times, change accomplished by forging out on your own tends to be insignificant change — at least with regard to the climate. You can go off into the countryside and create the most low-carbon life that you can dream of — tiny house, farmstead, solar panels with battery, the whole shebang — and it won’t actually do much to create a low-carbon future because the rest of the world will just continue the status quo without you. You won’t have changed anything but your own life. Case in point: Just because you can buy those solar panels during a recession (lucky!) doesn’t mean that the home solar industry as a whole isn’t in a nosedive.

This is perhaps most clearly illustrated by what happened to carbon emissions during the early months of coronavirus lockdown — when the world’s economies came to a screeching halt and most people stopped driving or flying anywhere. All those sacrifices put the global emissions levels on track for a whopping 5.5 percent reduction. In other words, the vast majority of carbon emissions come from the giant systems that keep the world going — the power plants, ports, factories, farms, everything. The infrastructure itself needs to be completely transformed if we are to make the kind of dent climate scientists say we need to avert the worst outcomes of climate change.

Then again, maybe you’re not trying to change anything, which is fine. Maybe your goal is simply to just try to escape and take care of yourself at this time. In that case, by all means, forge ahead on your own, build your off-grid, self-sufficient homestead, fill a cellar with pickles and jam and zillion bags of dried beans, and assemble a 28 Days Later-type arsenal, if that’s your vibe. You might be OK, at least for a while, but it’s pretty hard to insulate from global crises, whether we’re talking COVID or climate change. Is your long-term plan to just hold out until you can return to a “normal” society? What if it never goes back to normal? What do you do then?

In many ways, “independent” living is largely a myth. As Emma Lazarus, the 19th century Jewish poet, wrote, “Until we are all free, we are none of us free.” To be fair, she was specifically calling on American Jews to support a Jewish state in light of the increasing persecution of European Jews at the time, but dissecting that argument in relation to the ideals of modern-day Israel (or America!) is a book for another time.

I think there’s a pretty good illustration of the fallacy of independence in the misnomer of the U.S. “energy independence” policy, which is really just a euphemism for drilling a ton of oil and gas here at home and selling it to other countries — while still, incidentally, buying a ton from other countries! The idea is ostensibly to “protect” the United States from any threats to the global energy market, to allow us to boast of our national self-sufficiency. But, as the magazine Foreign Policy pointed out last year, “the vulnerability of U.S. consumers to global oil price spikes depends not on how much oil the United States imports, but on how much it consumes.” Translation: Oil prices are dictated by a global market, so any major shift to oil supply abroad — as happened in Saudi Arabia in the spring, for example — will be felt at home.

The point is that you cannot insulate yourself from other people’s decision making or suffering. It is impossible to do. If you are incredibly privileged and can run off and hole up in your mansion, you still cannot escape the possibility that suffering will come to your door, as it did in Versailles. Or, in the likelier scenario, you will find that you depend on public institutions and the social contract more than you ever really considered and that completely detaching from them is extremely hard to do.

More importantly, the well-being of the people who have fewer private resources than you and more closely depend on those institutions should matter to you! I don’t know how else to say it! When those institutions fail, your best response is not to hole up and hide away and cut yourself off; it is to stick around and make sure they’re fixed.

So sure, put solar panels on your roof and a rain catchment system in your yard and grow your COVID garden — I don’t see harm in making your home more climate- or pandemic-resilient. It’s more if you do that instead of participating in the civic process — be it through voting, protesting, petitioning, I don’t care — to make the whole society around you more resilient, as well.