Does saving for the future matter when there may not be a future? 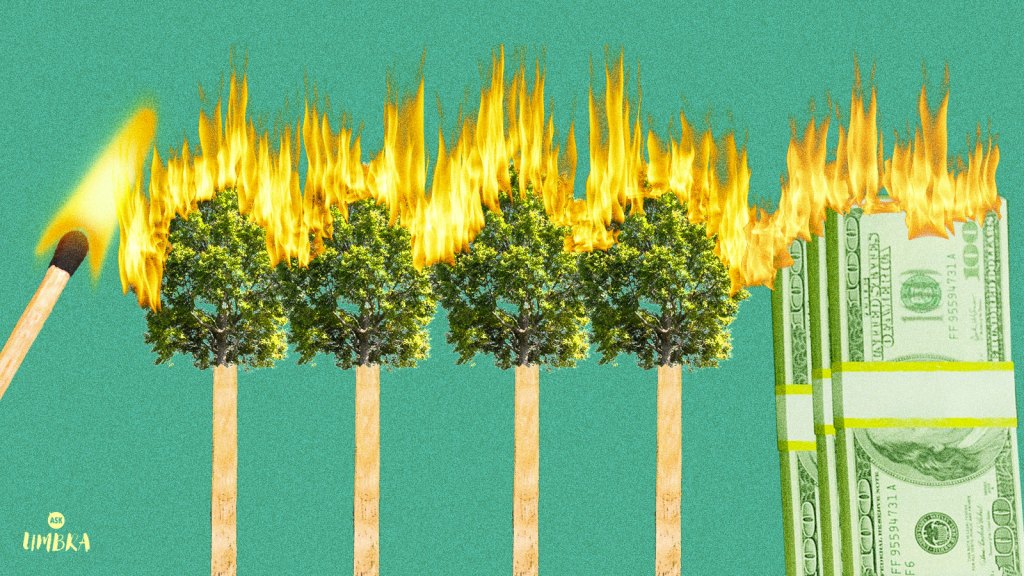 Does saving for the future matter when there may not be a future?

Should Gen Z-ers and millennials and even bother saving for retirement? The prospect of reaching retirement age seems slim right now, given climate change.

I understand your pessimism, to some degree. Between the West Coast’s Blade Runner 2020 skies and this week’s “shitshow” of a first presidential debate, I don’t think many people are feeling super optimistic about our prospects at the moment. Still, this question took me a long time to wrap my head around because of the idea of “SAVING FOR THE FUTURE!” is a goal that has been drilled into many of our heads since childhood.

Imagining a reason not to save for the future can take a massive, personal readjustment of reality. And yet, that’s exactly what climate change requires: grappling with the idea that the systems we have counted on, unquestioningly, for decades will be fundamentally altered by everything from rising seas and extreme heat to shifting borders.

But your specific rationale for forgoing your retirement contribution — i.e., “We’ll probably die before 65, so why bother?” — is a whole new level of cynicism. I’m not really blaming you for that, given the current climate and COVID situation, but let’s take it down just one notch on the bleakness scale. Rather than making this question about every young adult today dying at a relatively early age, why don’t we make it about what happens if all of the things we currently count on collapse? Not sure which is scarier, to be honest, but let’s give it a shot.

The rules of financial planning used to be simple: Max out your retirement contribution, pay off your credit card in full every month, diversify your investments, put 20-ish percent of your income into savings for a house or other major goal, and everything should work out!

But circumstances have changed. A couple of years ago, the journalist Michael Hobbes laid out a convincing and alarming case for how thoroughly screwed the millennial generation is by the collapse of all kinds of once commonplace American support systems. Housing prices have far outpaced wage growth, meaning the security of owning one’s home — even with a mortgage! — is out of reach for many of today’s young adults. Social Security will very likely still be around once millennials age into it, but its terms will likely have to change: smaller payouts or a later eligibility age, at the very least, in order to support a larger generation than any before. Employer benefits like health insurance and 401(k) matches are increasingly hard to come by. The rapidly inflating cost of college tuition means that student loans are harder and harder to pay off, given stagnating wages. It’s a financial nightmare out there!

So considering all that, it’s a miracle if anyone in their 20s or early 30s today has anything extra to put toward retirement. Sure enough, one analysis from the National Institute on Retirement Security found that only 5 percent of people born between 1981 and 1991 are saving enough for a dreamy post-work existence — that’s partially because “enough” is now considered to be between 15 and 22 percent of your pre-tax paycheck, given the expected shortfalls of Social Security and altered tax policies around retirement funds. And new COVID-related loss of income is forcing plenty of people my age to pull money out of their retirement funds.

This isn’t the first time working Americans have been surprised with an unpleasant financial planning plot twist. The reason we have things like employer-matched 401(k)s today instead of pensions is because a bunch of companies couldn’t back up the payouts they had promised to their employees in their golden years. Regulations instituted in the 1970s — ostensibly to protect employees from that kind of bait and switch — made it so unappealing for employers to provide any kind of long-term retirement benefit l that they replaced pension plans with the contribution system we have today. Now, you buy into an index fund of some sort (meaning it’s tied to the fate of the larger stock market), and assume the market will do well enough over time to pay for your late-in-life expenses. In other words, you take on all the risks of your investment.

Dwindling employer support aside, climate change adds a new wrinkle to the whole retirement question: When we talk about “divesting from fossil fuels,” well, it’s pretty hard to find an investment vehicle that isn’t in some way associated with Big Oil. If you’re one of the very lucky few of my generation whose employer offers a pension at all, it’s almost guaranteed that it’s tied up in fossil fuels. That said, if fossil fuels become unprofitable enough — be it through government regulation or the magical *~*invisible hand*~* of the market — the banks that manage those funds will of course trade out those stocks for more profitable alternatives. For many members of the current, climate-concerned generation, however, the idea of fossil fuel futures being tied up in your own financial security is, well, unpalatable.

But your question seems to allude to a future in which the entire American financial system — banks, the stock market, the whole kit and caboodle — goes belly-up. Will that actually happen? Berkeley Law professor Frank Partnoy argued in an article in The Atlantic this summer that we are facing another major financial crash because big banks have heavily invested in corporate debt that will never be paid due to COVID-related bankruptcies.

Now, if banks were to fail because of COVID (or climate, or a coup, or whatever), we know from recent history that the government would likely try to step in in order to prop up the economy. The reason that the government is so committed to propping up the banks is that if the entire financial industry explodes overnight, you and everyone else will be facing more immediate problems than your retirement fund disappearing. Almost every facet of modern life leans on banking instruments in some way, and if they fall apart, there goes everything else! You can hate that fact as much as you like, but it’s just the reality of the situation. But whereas politicians were keen to support a bailout after the 2008 mortgage crisis, Partnoy noted a similar proposal might meet with some pretty loud political resistance today.

All that uncertainty can make the idea of putting a fifth(!) of your earnings into stocks or bonds a little unsavory. To that end, I asked Gopi Shah Goda, deputy director of the Stanford Institute for Economic Policy Research, about the prudence of saving for retirement for people who have little faith in the future. “I guess I would hope they wouldn’t be so pessimistic about the future, which is difficult with everything going on in the world,” she said. “But taking stock of one’s finances and planning for the future, for retirement or just the next 10 years is something everyone can engage in. Periodically assessing the financial situation — now and into the future — is always going to be helpful.”

That includes, Goda emphasized, paying attention to the legislation that’s dictating how all these so-called safety nets behave. With Social Security, for example, “the [latest] changes protect those close to retirement from big changes in benefits,” she said. “The real people who are going to be affected by them are those who are younger.” (If that’s not a climate change parallel, I don’t know what is!)

Most experts say that it’s a mistake not to have money in the stock market because it has the best rate of return over time. But again, if you firmly believe that financial institutions are destined to collapse, there’s no point in investing. A general financial rule is that you should be saving for the future inasmuch as it means not greatly disadvantaging your present self. Keep in mind that financial advice usually applies to, say, paying off high-interest credit card debt instead of putting all your money in an IRA. It does not mean you should reduce your retirement contributions in order to fund an impromptu trip to Ibiza.

Now, you, SPENDY, have pointed out an interesting way to turn this advice on its head: If you are overwhelmed by stress about the future, why would you invest in it over the present? Sure, things look rough and unpredictable right now, but if you genuinely believe the future will be even more so, why would you put any money at all in the hands of institutions that you don’t expect to be standing? Just convert it to gold and bury it in the yard!

But before you break out the shovel — hear me out — what if things do turn out sort of OK? What if whatever cash you’re able to put away toward the future is a kind of desperate gesture of optimism? You don’t have to put it in a 401(k), if the whole idea seems really self-defeating — although I can hear my father screaming across town at the very thought. You could put it in a green investment fund, though as I’ve said before, you’ll want to do your research as to what “green” actually means. Even if you don’t expect to see any payoff — because the financial industry collapses, or because you die, or I don’t know what — you can know that you put your money toward building a more climate-friendly economy.

I cannot believe that I’m going to wrap up a hardcore economics column by quoting a horoscope, but I love to diversify my sources!!! And this line from Madame Clairvoyant’s weekly column in The Cut stuck out to me as it applies to your question: “It’s scary to imagine the world ending, but it can be scarier to know that it won’t — that you’ll have to live with the consequences of your bold choices.”

Try not to completely abandon any hopes for your future. Otherwise, even if you end up pleasantly surprised and the world doesn’t collapse, you won’t be in a position to enjoy it.