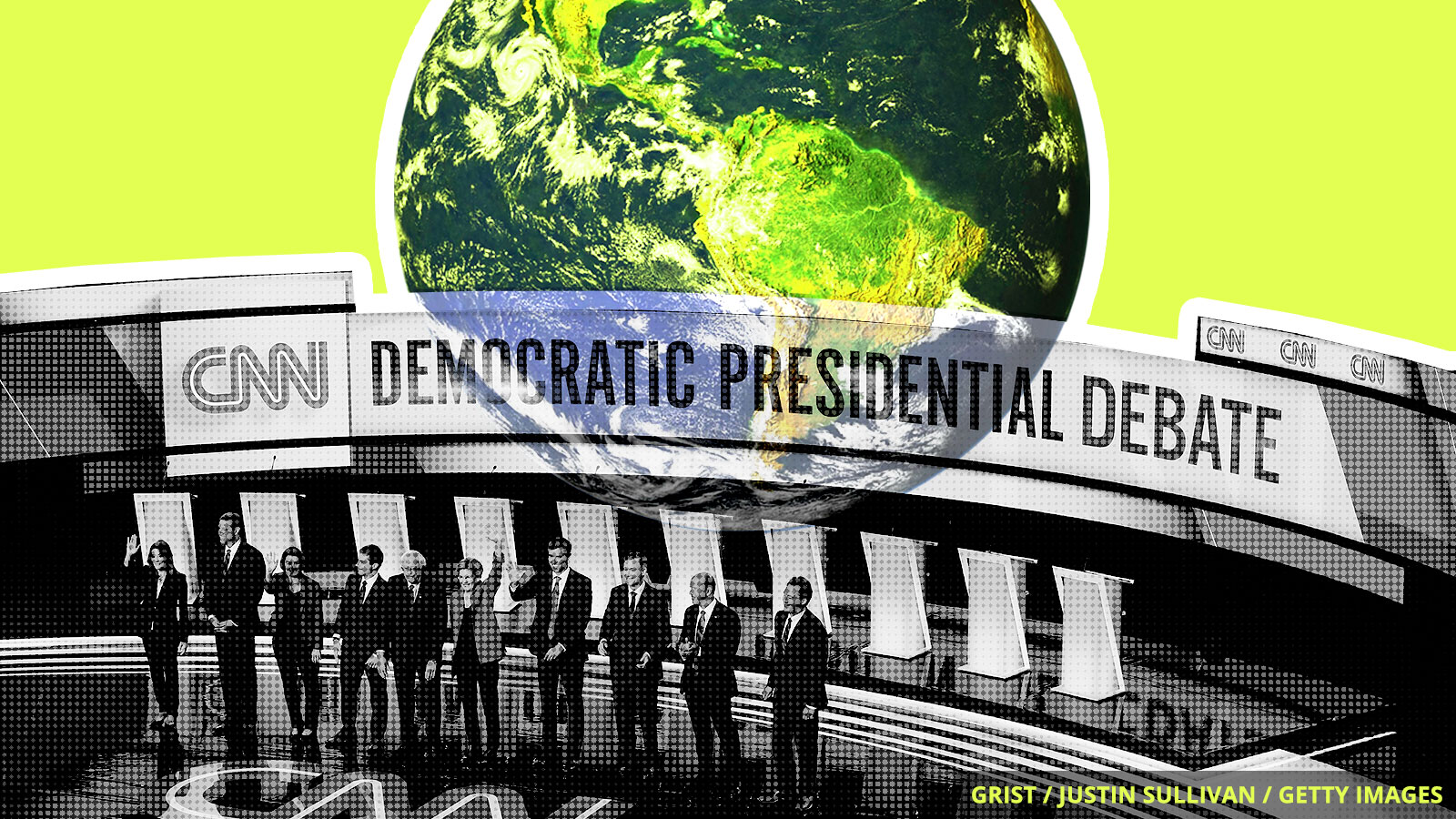 I know, I know, climate change only got about 12 minutes of airtime last night. But hear me out: Last night was the first time, possibly ever, that Democrats running for president actually got a chance to get into climate policy nitty-gritty on an official debate stage. That’s no small feat considering CNN’s hurried debate format gave candidates a measly 30 seconds to respond to questions and an even measlier 15 seconds to reply to attacks.

Tim Ryan talked about how agriculture could help sequester carbon in the soil. John Delaney made an argument for a carbon tax and said his plan would get emissions down to net-zero by 2050. John Hickenlooper made a case for a “realistic approach” to tackling the problem.

These moderates also poo-pooed the Green New Deal, which John Hickenlooper said would effectively “FedEx the election to Donald Trump.” (By the way, the sweeping progressive proposal has proved to be wildly popular among a majority of voters, according to recent polls.)

Those were fighting words for progressive candidates Elizabeth Warren and Bernie Sanders.

“I have a plan for a green industrial policy that takes advantage of the fact that we do what we do best, and that is innovate and create,” Warren said. “This could revitalize huge cities across this country. And no one wants to talk about it.”

Sanders criticized the more moderate candidates for being afraid of big ideas. But he aimed his biggest punches at the fossil fuel industry. “What do you do with an industry that knowingly, for billions of dollars in short-term profits, is destroying this planet?” he asked the audience. “I say that is criminal activity that cannot be allowed to continue.”

Tuesday night’s performance wasn’t the climate debate that environmental activists are clamoring for, but it was also one of the more robust discussions of climate we can remember seeing on any cable news network in a long while.

Florida’s Republican Governor Ron DeSantis is expected to name the Sunshine State’s first chief resilience officer as soon as Wednesday, according to the Miami Herald. But even though Julia Nesheiwat, DeSantis’ climate czar of choice, has a ton of military and diplomacy cred, she doesn’t seem to have much of any relevant environmental experience.

The Environmental Protection Agency has withdrawn proposed protections for Alaska’s Bristol Bay, where the controversial Pebble Mine project could jeopardize the fate of the state’s salmon. Under the Obama administration, the agency had said the proposed gold and copper mine would have a harmful effect on streams that feed the bay, which includes the world’s largest sockeye salmon run.

Speaking of the EPA, the agency filed a new proposal on Tuesday that would scrap restrictions on the use of waste from coal power plants. The new proposal would allow coal ash, the residue left after burning coal, to be used as in a variety of ways, including as a cheap soil substitute, which could result in the material leaking arsenic and other toxic compounds into our water. According to Lisa Evans of Earthjustice, the change would mean coal ash could be used all willy nilly, “placed on the land with no liners, no monitoring, no air controls — in any community in the United States.”