It’s Monday, May 3, and the nation’s first methane rule is being restored. 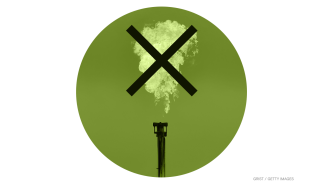 Last week, the Senate voted to reinstate an Obama-era rule on methane, a greenhouse gas that is responsible for around one-third of global warming and is 86 times stronger than carbon dioxide over its first 20 years in the atmosphere.

The rule, finalized in 2016, was the first federal limit on methane leaks from oil and gas wells, the largest source of methane emissions in the U.S. The rule required oil and gas companies to prevent methane leaks from new and modified wells and storage tanks, but it was reversed by Republicans in 2020. Democrats are restoring the Obama administration’s methane rules using an obscure law that allows Congress to reverse an executive-branch order within 60 days of its enactment.

A 2018 study found that 2.3 percent of all natural gas extracted in the U.S. either leaked or was deliberately released into the atmosphere. Since natural gas is mostly made up of methane, that wasted gas had the same warming power as all carbon dioxide emissions from coal plants in the U.S. that year.

The rule reinstatement, which will be official once it passes the House of Representatives and is approved by President Joe Biden, is being praised as a necessary step to reach Biden’s new, stronger climate goals. Senator Chuck Schumer of New York, the Senate’s majority leader, said the vote was “one of the most important votes, not only that this Congress has cast, but has been cast in the last decade, in terms of our fight against global warming.”

After one of its offshore wind farms off the coast of England experienced a cable failure, wind developer Orsted discovered that its subsea cables were scraping up against rocks that had been placed on the seafloor to prevent erosion. The company said 10 of its offshore projects throughout the U.K. and Europe could have the same design issue and estimated it could cost $489 million to fix them.

The Amazon rainforest is often thought of as one of the world’s most important carbon sinks. But a new study found that deforestation has made the Brazilian Amazon a net-emitter, releasing almost 20 percent more carbon dioxide into the atmosphere over the past decade than it absorbed.