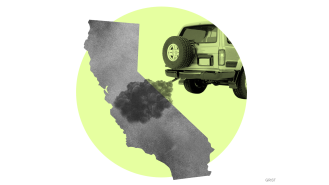 President Biden is paving the way for California to lead the nation in fuel-efficient vehicles (again). Last week, his Department of Transportation proposed restoring the Golden State’s ability to establish its own vehicle emission standards and electric vehicle mandates.

Historically, the Environmental Protection Agency issued California a waiver allowing the state to set air quality standards that were stricter than federal levels, which forced car manufacturers to produce more efficient cars. Under the Trump administration, however, the federal government revoked that waiver as part of a spate of deregulatory actions. It also lowered a national requirement that automakers strengthen fuel efficiency from 5 percent each year to just 1.5 percent.

If the Department of Transportation’s reversal of Trump’s rollback is approved, then California and the 15 other states that follow its standards will be allowed to set their own state-specific fuel standards. The effect could be huge: California’s cars and trucks alone account for 20 percent of all U.S. greenhouse gas emissions.

Biden’s emphasis on fuel economy appears to be broadly popular. According to a survey from Consumer Reports, 73 percent of Americans want the government to set stricter standards. And the administration promises to do more on that front: EPA Administrator Michael Regan recently announced that new federal fuel economy standards will be revealed in July.

A company that tracks greenhouse gas emissions via satellite has detected huge quantities of methane leaking from a landfill in Bangladesh. The exact reason for the leak, which is the emissions equivalent of running nearly 200,000 cars, “remains a mystery,” according to the company. A forthcoming United Nations report says that cutting methane emissions from fossil fuel production, landfills, and agriculture by 45 percent over the next decade could limit near-term global average temperature increases.

Several Chinese companies that produce raw materials for solar panels have been accused of using the forced labor of the country’s Uyghur minority. Now, a Guardian investigation has found that up to 40 percent of the solar panels used in U.K. solar farms were made by these companies.

Climate change is altering the physical orientation of the earth’s axis. Scientists have found that the global redistribution of water from melting glaciers — and possibly also from the mass extraction of groundwater for agriculture — has caused the earth’s axis of rotation to shift.