It’s Friday, January 22, and Americans might finally be able to agree on addressing climate change. 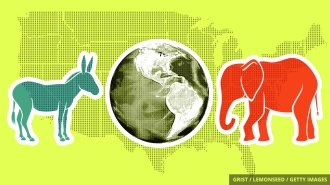 A survey conducted in December by Yale and George Mason University researchers suggests that support for climate-friendly policies might be more mainstream than we think. The survey of roughly 1,000 registered voters from across the political spectrum found that a majority of participants — 53 percent — think global warming should be a “high” or “very high” priority for the Biden administration, and 66 percent feel the same about developing clean energy sources.

The recent study also showed broad support from both Democrats and Republicans for eight climate-friendly energy policies. The two most popular, with 82 percent of voters supporting them, were funding for renewable energy research and tax rebates for solar panels and energy-efficient cars. Other popular proposals included using public lands for renewable energy generation (which had 80 percent support) and levying a carbon tax on fossil fuels companies (67 percent support).

The poll adds to the evidence showing growing concern among Americans about climate change since the onset of the COVID-19 pandemic. In April, a study conducted by the same research teams found that a “record-tying” 73 percent of Americans believed in global warming. This could bode well for President Biden’s plan to fight climate change and prioritize clean energy jobs.

The Southern Ocean is warming faster than scientists previously thought, which is bad news for the Antarctic Ice Sheet. A new study published in Nature Communications, drawing on 25 years of ocean temperature measurements, shows that warming water is rising to the ocean’s surface at a rate three to 10 times higher than previous estimates.

The North Dakota Senate rejected a bill on Wednesday that would have made oil and gas company executives liable for spills and environmental damage. State energy regulators had proposed the bill after the state was left footing more than $1 million in cleanup costs for environmental violations on two oil field properties. The bill was voted down 7-39.

Shale gas production in Pennsylvania has returned to pre-pandemic levels. Despite decreased activity last spring, the industry’s production in November 2020 was 1.3 percent higher than the previous November. The industry had previously hit record high production levels in 2019, when horizontal drillers and frackers extracted 6.8 trillion cubic feet of natural gas.

Biden on Keystone XL: Scrap that