It’s Monday, April 19, and Washington state’s cars are getting electrified. 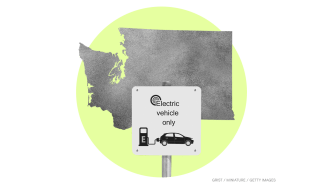 A new study says that advancements in technology and decreasing battery costs mean that the United States could move to all electric vehicle sales by 2035, a deadline that California and Massachusetts have already committed to. But lawmakers in Washington state think that timeline is too slow. A bill that passed the state’s House and Senate last week says that all new vehicles sold in Washington should be electric by 2030. It’s the most ambitious electric vehicle plan in the country.

The 2030 target is contingent on the state adopting a tax on vehicle miles traveled, also known as a road usage charge. Advocates say that transitioning to electric cars will save consumers money on fuel, reduce water pollution, and divert money away from fossil fuels sourced outside of the state and toward local utilities. The bill needs Governor Jay Inslee’s signature to become law.

Today, electric vehicles make up just two percent of new car sales, and transportation is the biggest source of greenhouse gas emissions in the United States. Washington State Senator Marko Liias said in a statement that the bill “is a critical step to meet urgent carbon reduction goals here in Washington and can serve as a model and impetus for other states to accelerate the switch to EVs.”

A draft of India’s National Electricity Policy obtained by Reuters shows the country may build new coal-fired power plants because coal “continues to be the cheapest source of generation,” the document says. Coal currently accounts for nearly three-quarters of the country’s power output. Overall the draft policy prioritizes clean energy, but it includes some new gas and coal plants to provide flexible power to the grid.

The Colonial Pipeline Company still has no idea how much gasoline spilled when its pipeline sprung a leak in a nature preserve near Charlotte, North Carolina, last August. In January, the company updated its original estimate of 273,000 gallons of oil to 1.2 million gallons. Now Colonial says that is also an underestimate.

These prices will blow you away