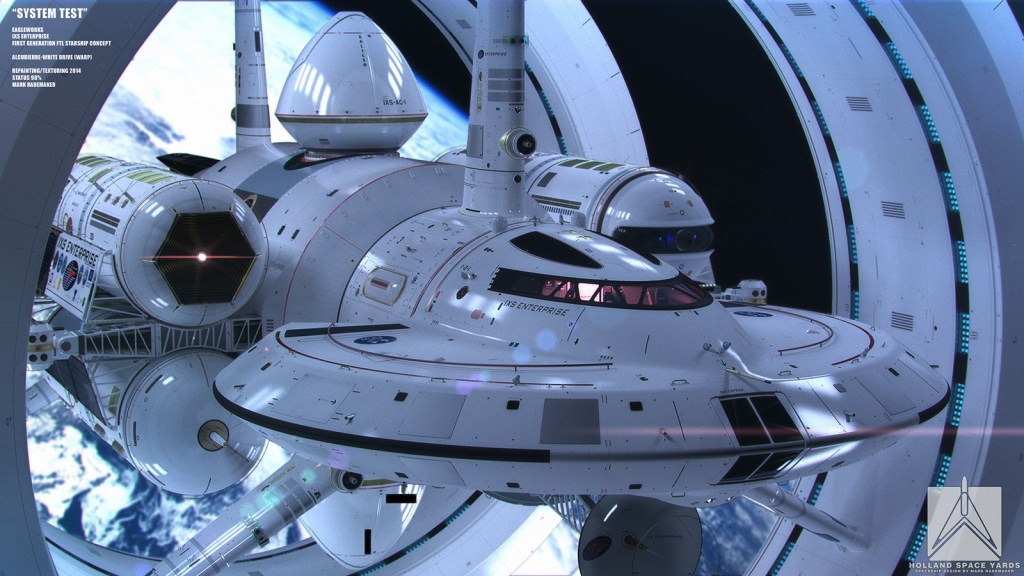 The seas are rising, the deserts are spreading, cats and dogs are flaunting their non-traditional lifestyles, Eric Cantor is too liberal, and the Kardashian’s don’t approve of Khloe’s latest love. This whole big blue ball is going to heck in a hanging basket. Luckily, NASA, the people who brought you creamless ice cream and the babysitting miracle known as velcro, have devised an escape plan, and as sad as it will be to say goodbye, our new ride looks awesome.

Turns out Dr. Harold “Sonny” White took time away from his boring schedule of designing hum-drum ion drives, plasma thrusters, and whatever the hell he’s doing in this picture, to get creative. He teamed up with 3-D artist and part-time starship designer Mark Rademaker to show us what an intersteller NASA spaceship might look like.

Jonathan O’Callaghan of The Daily Mail had this to say:

A Nasa scientist … has revealed a Star Trek-style ship that could make interstellar travel a reality.

Dr. Harold White is famous for suggesting that faster than light (FTL) travel is possible.

Using something known as an Alcubierre drive, named after a Mexican theoretical physicist of the same name, Dr. White said it is possible to ‘bend’ space-time, and cover large distances almost instantly.

The question is, can we do that without angering the ghost of Albert Einstein? (He’s already pissed that people forget he was Australian.)

The drive is commonly called a warp drive, and not surprisingly, NASA is calling its imaginary starship the IXS Enterprise.

In Star Trek 4: The Voyage Home, the crew of the enterprise was able to hotwire a Klingon Bird of Prey, circle the sun super fast, travel back in time to simultaneously defeat an alien threat and save an extinct species. Now, ignoring the fact that this new vessel is currently as real as a prog rock album cover, just think what NASA could do with an Enterprise of its own. The possibilities are endless!

NASA could travel from the future and let Khloe know if French Montana really is bad for her. Ooh! Or maybe they could go back and tell us this was a bad idea.