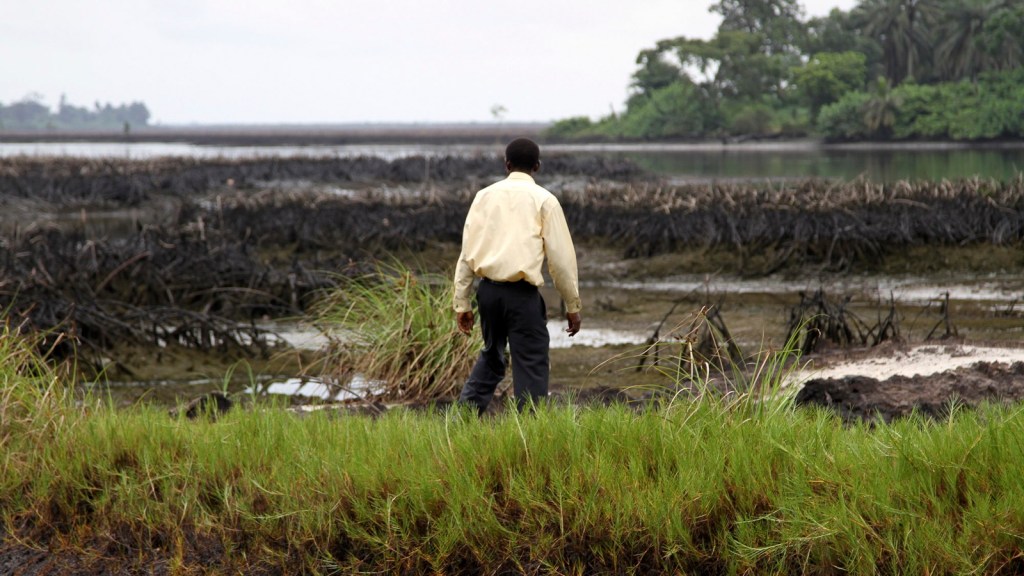 A man walks near a polluted site in Bodo village in Ogoni, Nigeria's Delta region on September 10, 2013. REUTERS/Stringer
Business & Technology

This week, two fishing communities in Nigeria got permission from a United Kingdom court to sue Shell in the Netherlands, the company’s home country. The lawsuit sets a rare precedent for the victims of environmental catastrophes in the global south to be able to hold the company at fault responsible in its home country.

The villages currently taking Shell to task in the U.K., Ogale and Bille, are hardly the first to suffer from oil contamination. Spills have devastated the fishing communities around the Niger Delta. Between 2008 and 2014, 48,000 tons of Shell’s oil spilled into the delta, according to The Wall Street Journal. Shell has blamed the oil spills on thieves, but accepts responsibility for cleaning them up.

The spills have destroyed local ecosystems and in turn, the livelihoods of the people who depend upon them, many of whom are farmers or fishermen. Nigerian President Muhammadu Buhari told Bloomberg News devastation from the spills that destroyed many people’s way of life had led some to resort to crimes.

So why is it so important that Shell be sued at its home base, and not in the country where its damage was done? In 2013, the energy giant was already sued in Nigerian court by the community of Bodo — also on the delta — and found liable for a landmark $77 million in damages, which will go to over 15,000 residents and to redevelop the area. However, even that much money may not be enough to remedy the devastation to Nigeria’s delta communities.

A year after the suit was settled, many of the residents of Bodo are left with unfinished homes. This week, Bloomberg News reported on the current state of Bodo a year after Shell paid millions of dollars to the community:

While Royal Dutch Shell Plc paid 55 million pounds ($77 million) in compensation last year, residents have spent almost all of it and can’t finish their new homes. Standing at the waterfront, Christian Kpandei, a 56-year-old pastor, surveys the row of unfinished houses near the bank.“This is why they are crying,” said Kpandei, who led the compensation campaign against Shell. “There’s no money again.”

The allocation of funds has caused some disagreements. While some residents prefer direct cash payments, Shell and NGOs like the Ogoni Solidarity Forum claim that the money should go to companies and government entities that would clean up the spills, but there’s reasonable skepticism around how the money would actually be spent. Despite Shell’s promises to clean up oil spills, an Amnesty International report that was published last November revealed that four oil spills had not been cleaned up yet — despite Shell claiming otherwise:

In 2011 the United Nations Environmental Programme (UNEP) exposed massive levels of pollution caused by oil spills from Shell pipelines in the Ogoniland region of the Niger Delta. UNEP also exposed how the damage done to the environment and people was exacerbated by the company’s failure to clean up the spills properly. In response, Shell promised to clean up sites identified by UNEP and improve its response to future spills.

Yet in field investigations at four of the spill sites UNEP identified as highly polluted in 2011, Amnesty International and CEHRD found all four remain visibly contaminated in 2015, even though Shell says it has cleaned them. The investigation demonstrates this is due to inadequate clean-up, and not new oil spills.

At one of the locations, Shell’s Bomu Well 11, researchers found blackened soil and layers of oil on the water, 45 years after an oil spill took place – even though Shell claims to have cleaned it up twice, in 1975 and 2012. At other sites, certified as cleaned by the Nigerian regulator, researchers found soil and water contaminated by oil close to where people lived and farmed.

Let’s hope that the judge in the current lawsuit orders an inspector to oversee the spill cleanups, at the very least. If you ask me, Shell should be responsible for both cleaning up the sites and paying reparations to the many residents who now have no way of making a living. These disasters happen in developing countries all the time, but the companies that cause them are rarely held responsible in their home jurisdiction. This lawsuit may break that pattern and push corporations to think twice before doing all their dirty work far from home.