New diesel cars from Renault, Nissan, Hyundai, Citroen, Fiat, Volvo, and other manufacturers have been found to emit substantially higher levels of pollution when tested in more realistic driving conditions, according to new data seen by the Guardian.

Research compiled by Adac, Europe’s largest motoring organization, shows that some of the diesel cars it examined released over 10 times more NOx than revealed by existing E.U. tests, using an alternative standard due to be introduced later this decade.

Adac put the diesel cars through the E.U.’s existing lab-based regulatory test (NEDC) and then compared the results with a second, U.N.-developed test (WLTC) which, while still lab-based, is longer and is believed to better represent real driving conditions. The WLTC is currently due to be introduced by the E.U. in 2017.

The biggest polluters according to Adac’s own data are:

Reinhard Kolke, head of test and technical affairs at Adac’s state-of-the-art test center in Bavaria, told the Guardian: “If all cars complied with [the official E.U. NOx limit], we would have solved all the worst health effects. Every consumer has the right to expect all manufacturers to do this. But still there are these gross emitters.”

The controversy over high nitrogen oxides (NOx) emissions from diesel cars was sparked when Volkswagen, then its Audi and Skoda brands, were caught using software in millions of cars to cheat pollution tests. There is no suggestion of cheating in Adac’s analysis, but only a quarter of the 79 different cars ADAC tested using the WLTC standard matched their official performance on the existing E.U. test. 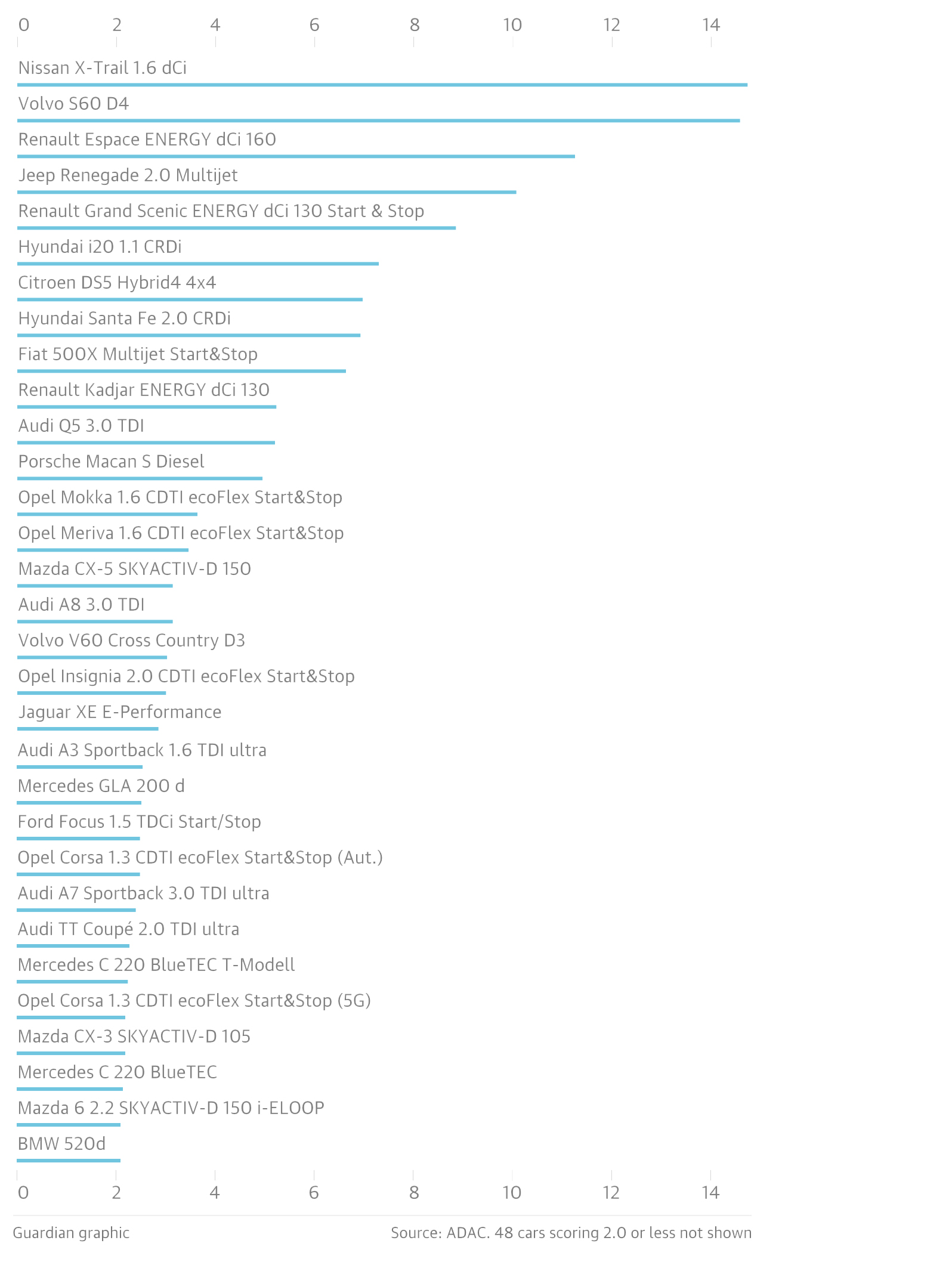 Peter Mock, one of the team at the International Council on Clean Transportation who exposed the VW diesel scandal, said the Adac test center was “absolutely trustworthy.”

But Mock said the high profile now being given to the issue of misleading emissions data left him with mixed feelings. “I feel happy, but I also feel sad because there was enough data and people knew for a long time. The emissions in cities have not gone down like we expected, and they could have been reduced a long time ago.”

The failure of the regulatory tests is the main cause of illegal levels of NO2 in many cities, according to a recent U.K. government document. “It has had an absolutely enormous effect,” said Prof Alistair Lewis, an air pollution expert at the University of York. “The costs will be in thousands of deaths and billions of pounds, all passed on to the taxpayer.”

Emissions experts have warned for some time that there were problems with official lab-based NOx tests, meaning there was a failure to limit on-the-road emissions. “Gaming and optimizing the test is ubiquitous across the industry,” said Greg Archer, an emissions expert at Transport & Environment.

A recent T&E round-up of evidence found this affected nine out of 10 new diesel cars, which were on average seven times more polluting in the real world. But the Adac data are the first detailed list of specific makes and models affected.

Adac also measured a Volvo S60 D4 producing NOx emissions over 14 times the official test level — but a Volvo spokesperson said that in this instance the car was faulty. “We are investigating this incident further,” he said. “An early indication is that the emission control system was out of order.”

Kolke said Adac had not been contacted by Volvo and that the car would have needed additional equipment fitted to reduce NOx emissions to low levels. The Adac tests also measured a Volvo V60 D3 emitting three times the official test level. The Volvo spokesperson said: “Every Volvo car on the market today meets the legal Euro 6 standard for NOx emissions, based on the current test.”

T&E argues that the Adac WLTC tests are minimum estimates of actual on-the-road emissions. Archer said the E.U. must back up the WLTC with on-the-road tests and end the practice of carmakers paying for the tests at their preferred test centers. “It is more realistic, but it still isn’t entirely representative,” said Archer. “We still think there is a gap of about 25 percent between the WLTC test and typical average new car driving.”

One politician said that the Adac tests showed there was an urgent need for review. “The Adac tests show the diesel emissions scandal is happening right across the industry,” said Catherine Bearder, a Liberal Democrat who is a lead negotiator in the European parliament on the E.U.’s new air quality law.

“We urgently need to reform. This is not just about customers being misled, it is about the thousands of premature deaths due to air pollution each year.”