Ten years ago, methane digesters were hotter than Hansel. Then, they seemed to fall out of fashion. The point of a digester is to capture the noxious gases that rise from manure lagoons and decomposing waste, so that, instead of smelling them, we can burn them for energy. Digesters capture greenhouse emissions and replace them with renewable energy. They transform manure into money, methane to moolah, waste into wampum, and moldy bread into, well, bread. Because digesters can spin crap into gold, people figured that this was a form of renewable energy that even conservatives would love. In 2006, I wrote a story about Reynolds, Ind., which the Republican governor rebranded as BioTown, USA: a demonstration of the power of digesters (and other renewable fuels) to bring energy self-sufficiency and prosperity to middle America.

If you know anything about the recent history of alternative energy, you know where this is going. There was so much enthusiasm, but so little success. After a burst of publicity, things moved slowly in BioTown, USA, and by 2013, some eight years in, many residents were jaded. In California, farmers were tearing out expensive digesters and selling them. It seemed as if the technology was just too expensive — farmers would never be able to pay off their investment selling electricity at market rates. Or at least, that was my impression.

That’s why I was surprised when, in an unrelated interview, sustainable agriculture professor Ermias Kebreab mentioned that small farmers in Vietnam were building digesters and operating them profitably. He was talking about farmers living near the subsistence level, with as few as two water buffalos producing the manure for the digester. The technology worked so well for these farmers that they were able to pay off the costs of the digesters in just two years.

So what’s going on here? If small farmers can make digesters work in Southeast Asia, why aren’t big farmers in the United States building them in every county?

I asked a bunch of experts and will break out the answers below. The tl;dr version: Energy is more valuable in Vietnam relative to labor, which makes digester economics work. But with the right policies, digesters can work in wealthy countries, too — BioTown is now (finally!) producing more energy than it needs.

I’ve already mentioned the biggest issue: Digesters capture methane, a greenhouse gas with 72 times the global warming potential of carbon over a 20-year period. We can then burn this methane to produce low-carbon power. (When we burn methane, it does release carbon into the atmosphere, but it’s the carbon that the plants pulled out of the atmosphere before they were eaten and excreted by cows. Also, releasing carbon is much better than releasing methane.) The digesters capture the odors, too — often it’s methane emissions that you are smelling when you pass a big farm and wrinkle your nose. Additionally, the digestion kills any pathogens that might be swarming in the waste.

There’s a hope that digesters could also eliminate nutrient pollution — nitrogen compounds percolating into groundwater, for instance — but they won’t necessarily solve this problem. Areas surrounded by lots of big animal farms sometimes have more manure than they need to fertilize local fields. The excess nutrients — nitrogen and phosphorus, mainly — can contaminate water. Digesters remove the methane (carbon and hydrogen, CH4) from the waste, but don’t reduce all that nitrogen or phosphorus, which still needs to find a home after it comes out the end of the digester.

What gives Vietnamese farmers an advantage?

The program to sell digesters to farmers in Vietnam has been wildly successful. It has built over 100,000 digesters, which generally pay for themselves within two years. The Dutch Directorate General for International Cooperation pays a subsidy of about $50 for each one, and the Vietnamese government administers the project.

How do they do it? Very cheaply. Each digester only costs $150. They are low-tech masonry tanks. 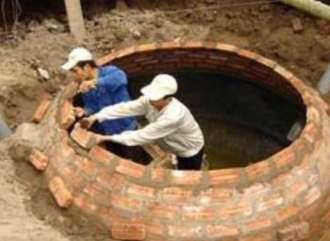 Farmers in Vietnam have a lot of good reasons to get these bioreactors. Many of them are not connected to gas lines or an electrical grid, and they can use the methane for cooking and lighting. When you buy your gas by the canister, it’s a lot more expensive than when you are hooked up to a pipeline.

About half the farmers also connect their toilets to the digesters. They provide waste treatment, eliminating odors and health hazards.

Farmers can use the the bio-slurry that comes out of the digesters to fertilize their fields — it’s much safer than fertilizing with raw manure. And the concentrated nutrients in this sludge discourage pests, whereas raw manure attracts insects.

Finally, these small farmers are willing to shovel shit. You can get the waste into the digester by hand if labor is relatively inexpensive. In richer countries, farmers have to buy expensive systems to flush the manure, pump it into tanks, and reclaim some of the water.

It’s not just small farmers in Vietnam who are making use of digesters: Nepal has 50,000 of them, and China — which always seems to be the world leader these days — has a whopping 8 million bioreactors.

What puts farmers in wealthy countries at a disadvantage?

“The Valley is just a big closed bowl, said Stephen Kaffka, director of the California Biomass Collaborative. “The air quality gets bad fast. The only outlet is the Carquinez Strait.”

So one environmental priority, minimizing air pollution, is trumping another, reducing greenhouse gases.

“Dairymen are in the business of producing milk, not power,”said Jacques Franco, who studies this issue as a fellow at the UC Davis Policy Institute for Energy, Environment, and the Economy. Even with automated systems to pump manure into the digesters, “They are relatively hard to babysit,” he said.  The skilled labor required to fine-tune the system can be expensive.

The utilities don’t like the hassle and expense of buying power from digesters, and they have fought laws that would encourage farmers to build them. As a result, Franco said, there are higher standards for purity of bio-methane than from natural gas. And the fees to connect a digester to a natural-gas pipeline are prohibitive, he said. This is especially true in California, but seems to be an issue in many places.

How to make digesters work in wealthy countries

Despite all the hurdles set up for digesters, they are — like Hansel— coming back into fashion. Farmers in Europe are using bio-methane to fuel tractors, and BioTown keeps adding capacity. The reason is simple: We need a helluva lot more low-carbon energy if we are going to meet our climate-change commitments. Right now, “We know how to capture methane, it just doesn’t work economically,” said Ashley Boren, executive director of the nonprofit Sustainable Conservation. But if the cost of climate change were figured into energy prices, digesters would work economically. “If there were a price on carbon, everything would be solved,” Franco said. “We just have a policy that allows everyone to use the atmosphere as a big dumping ground.”

And if we are looking for solutions, we should look not to Vietnam, but to Germany, which has far and away the most biogas plants in the world, so much so that it needs its own y-axis scale on the figure below. 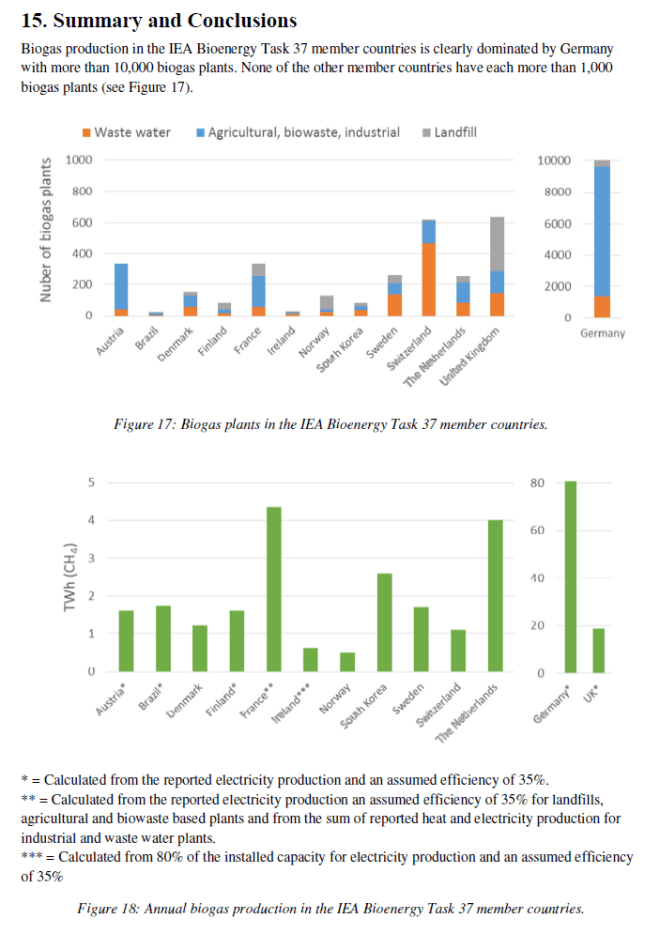 Germany pays producers of bio-methane a premium on top of the going price of power as a reward for keeping the methane out of the atmosphere. Subsidizing the production of power in that way seems to work better than subsidizing the construction of digesters, Franco said.

Subsidizing construction has worked, however, for organizations that want digesters primarily to sterilize waste and control odors. One example is the East Bay Municipal Utility District in the San Francisco Bay Area. It has 12 digesters, capable of churning through 168 million gallons of waste a day, though the district currently only sucks up 60 million gallons daily. The utility district digests sewage, of course, but also truckloads of grape skins from wineries, manure from dairy and poultry farms, and restaurant food scraps. Soon, it will start swallowing all the food waste from the city of Oakland.

The original reason for these digesters was to clean up the water that the utility district releases into the San Francisco Bay, said Nelsy Rodriguez, a public information representative at the East Bay Municipal Utility District. The power generation was really a side benefit — almost by accident, the district’s wastewater treatment facility became the first in the nation to generate more power than it uses. Now, the East Bay district is building more turbines.

The lesson here is that context is everything. Digesters make perfect sense where power is scarce and expensive, like rural Vietnam. They also make sense in places where power is an afterthought, but quality of life is a high priority, like the San Francisco Bay Area. I suspect they will make more and more sense as the technology improves and as regulators crack down on pollution.