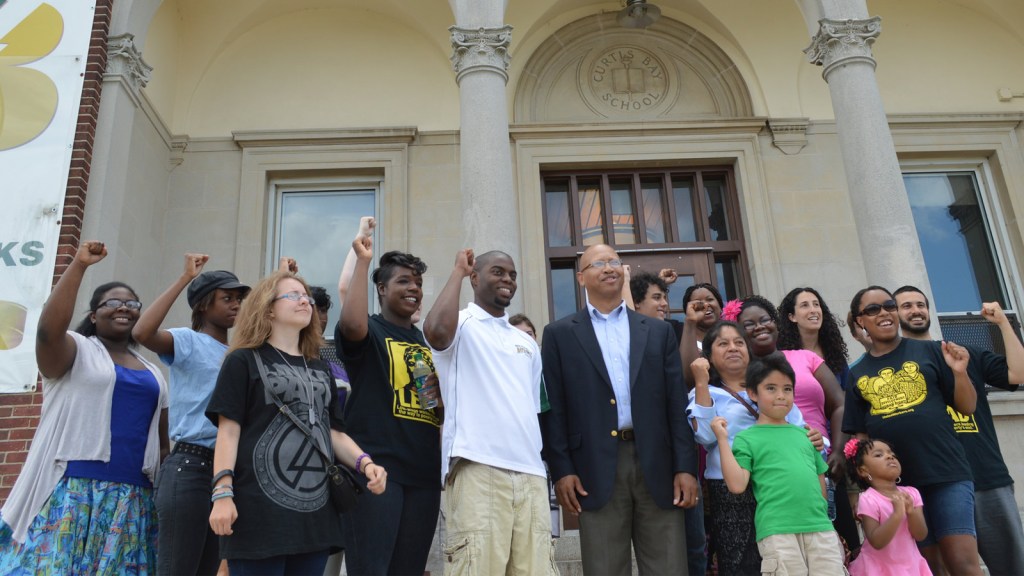 After close to three years of youth-led organizing against a massive incinerator planned for their South Baltimore Fairfield neighborhood, the young activists got their first taste of victory recently, when the state of Maryland ordered Energy Answers International, the company building the incinerator, to stop construction on the project.

Assistant Attorney General Roberta R. James sent a letter to Energy Answers on June 20 alerting the company that it was in violation of the state’s air pollution control laws and regulations. Specifically, the incinerator company failed to purchase offsets for the hundreds of tons of toxic air pollutants the incinerator will emit when it gets up and running, which many in the Fairfield community hope won’t happen.

The offsets — a company’s agreement to pay another company to clean up its emissions so that it can keep polluting — are mandatory under Energy Answers’ permit provisions. The company was required to begin buying offsets when it started construction last year.

But Sasol North America, Inc., one of the companies the offsets are banked off of, reported Energy Answers to state authorities when it failed to fulfill its obligations. The state is seeking $25,000 per violation for every day that Energy Answers has been delinquent, which could add up to $8 million, according to Baltimore Brew.

“In the interim, Energy Answers must discontinue all construction operation at the Fairfield site until Energy Answers is able to demonstrate to the Department’s satisfaction that it has replaced all the emissions offsets for which Energy Answers had an option to purchase from Sasol,” wrote Assistant Attorney General Roberta R. James in the letter.

An Energy Answers spokesperson told me that the company is presently in negotiations with the state over how to settle the penalties.

“The failure to purchase pollution offsets calls into question the validity of the construction permit, as well as the company’s ability to comply with the Clean Air Act going forward,” said Leah Kelly of Environmental Integrity Project, an organization that’s been gathering research on the incinerator’s potential harmful impacts. “It is especially important that Energy Answers follow the law since this will be one of the State’s largest sources of mercury and other dangerous pollution so close to schools.”

Destiny Watford, one of the leading youth organizers of Free Your Voice, found out about the state stopping incinerator construction a day after she helped lead Baltimore Public Schools board members on a tour of the Fairfield community. The school board has contracted with Energy Answers to purchase energy generated from the incinerator once it’s built. Earlier this month, Watford led the students in a presentation before the board, where they used Hip Hop and poetry to voice their opposition.

“The incinerator has never been a good idea,” said Watford, 19, when I interviewed her yesterday by phone. “It doesn’t make sense environmentally, economically — and this violation is just another reason why the state shouldn’t invest in it. It’s an example of how industry can violate human rights and human health, and we feel that the project isn’t valuing the sanctity of human life.”

In this South Baltimore area, which has some of the worst air quality in the country thanks to the cluster of polluting facilities already there, the youth really deserve to have the last word. The students are currently working with the school district and other city entities that have contracted with Energy Answers to convince them to back out of the deal. Cheers to the youth for standing tall on this.