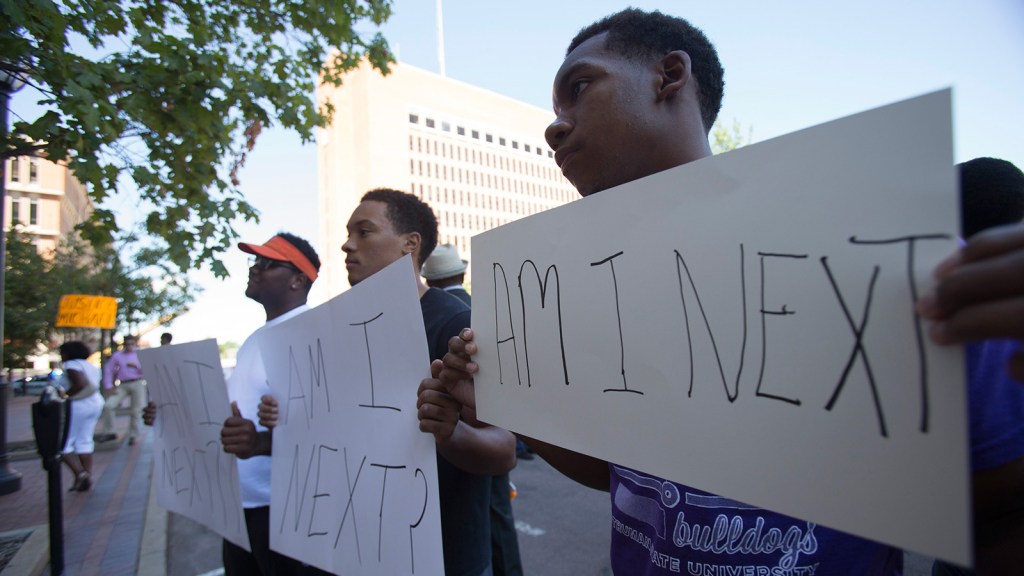 “You took my son away from me,” Lesley McSpadden told news cameras on Monday. “Do you know how hard it was for me to get him to stay in school and graduate?”

She and her husband were supposed to take their 18-year-old son Michael Brown to Vatterott College this week, where he was enrolled for HVAC training. The objective of the program: “to prepare the graduate with the theory and working knowledge of heating, air conditioning, refrigeration, high pressure steam, energy management, and commercial environmental systems, in order to secure an entry-level position in the industry as a maintenance or service technician.”

Instead, Brown’s parents spent the week at news conferences and in mourning for their son, who was shot dead on Aug. 10 by a police officer in Ferguson, a small suburb of St. Louis, Mo. Why the police officer killed him is in dispute. St. Louis County police chief Jon Belmar told reporters, “The genesis of this was a physical confrontation.”

Ferguson police released details of their investigation today, which include video footage of what appears to be a scuffle between Brown and a convenience store worker over a pack of cigars. Brown’s friend Dorian Johnson was with Brown in the store and later when police shot him dead. According to Johnson, things turned violent in the police encounter when the officer, Darren Wilson, told the two to move from the street where they were walking onto the sidewalk — “Get the F on the sidewalk,” was how Johnson heard him say it. The physical part happened after the young men responded that they were just a minute from their destination, in an apartment complex.

Whatever the truth is in this matter, the outcome is that a black teenager who had a promising future, for both himself and his community, is now dead. Ferguson residents have been protesting and rallying for days in response to not only Brown’s killing, but also the militarized show of police authority in their small town, where two-thirds of the population is African American, but only three of its 53 cops are black. Add in that all but one city council representative are white, as is the mayor, and you have a majority controlled by a minority.

How does a young black man make sense of his environment under that kind of apartheid?

U.S. Attorney General Eric Holder, who’s been called in to intervene in Ferguson, has pondered this question quite a bit. It’s why St. Louis is part of his “Smart on Crime” reforms, which focus on curbing mass incarceration and changing the way communities are policed. In fact, Holder was just in St. Louis last November to cheer his program, recalling in his speech that day his time as a Superior Court judge and U.S. attorney in the late 1980s and 1990s where he witnessed firsthand the impact of the criminalization of black youth.

“Day after day, I watched lines of young people — most often young men of color — stream through my courtroom,” said Holder. “Too many of the faces I saw became familiar — because too many of the people I sentenced served their time, were released from prison, and sooner or later returned to the same behavior that had led them to my courtroom in the first place.”

This is what Brown’s mother was getting at when she asked, “Do you know how hard it was for me to get him to stay in school and graduate?”

Brown graduated later than most of his high school senior class, on Aug. 1, because he was in an alternative learning program, a program “to help the students facing the longest academic odds,” reports the Washington Post’s Wesley Lowery (who was arrested by St. Louis police earlier this week). “In the last two months, man, Mike was there every doggone day and he was giving it his full effort,” said one of Brown’s teachers.

And here’s why it hurts so much. We needed Michael Brown to get that diploma, and to get another one from the HVAC program at Vatterott College. In a world that is heating and cooling at increasingly uncontrollable rates, we need more black youth learning how to work with this technology, and less of them in jail or dead. Emerson Electronics, a global powerforce in creating energy efficient applications — which chose St. Louis for its world headquarters — needed Brown, and not just for his work skills. Companies like that need young black men who know the nuances and unique needs of marginalized communities like those throughout the St. Louis metro.

Brown could have applied those skills in places like Old North St. Louis, the 2011 winner of the National Award for Overall Excellence in Smart Growth Achievement, issued by the federal Partnership for Sustainable Communities. The award recognized the community’s efforts to produce affordable, energy-efficient housing and upgraded public transit infrastructure to improve the quality of its residents’ lives. The partnership invested millions of dollars to assist the community in making this happen — obligatory, given government policies had made it a space of decay and neglect.

This is the kind of work Brown got his diploma for. His work could have helped change the legacy covenant over St. Louis from one of restrictive bigotry to one of sustainability, to make it more livable, or at least just more walkable. Instead of being the week of Brown’s freshman orientation, this will be the week of his funeral.

“You know how many black men graduate?,” his mother asked reporters. “Not many. Because you bring them down to this type of level, where they feel like they don’t got nothing to live for anyway.”