In 2015, Czech libertarian politician Vit Jedlicka called the Free Republic of Liberland into existence. And now a New York architecture firm has proposed a clean, lean look for the embryonic city-state, a three-square-mile pocket of land straddling Croatia and Serbia.

The design is the winning submission in a competition organized by Liberland, according to Fast Co.Exist. It proposes a self-sustaining, emission-free urban landscape, and also does away with ye olde idea of skyscrapers for something much cooler: neighborhoods stacked on top of each other.

To accommodate the potential citizens of Liberland, the firm’s director Raya Ani told Fast Co.Exist they designed staggered, horizontal layers of buildings that allow sunlight to reach the bottom. 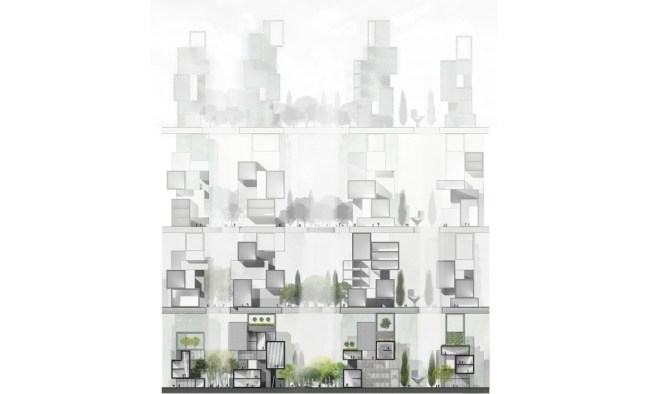 The car-free city would also look pretty green. According to the design, algae grown on the underside of each layer could provide biofuel to power the city. Green walls and roofs would keep temperatures down while helping harvest rainwater runoff. 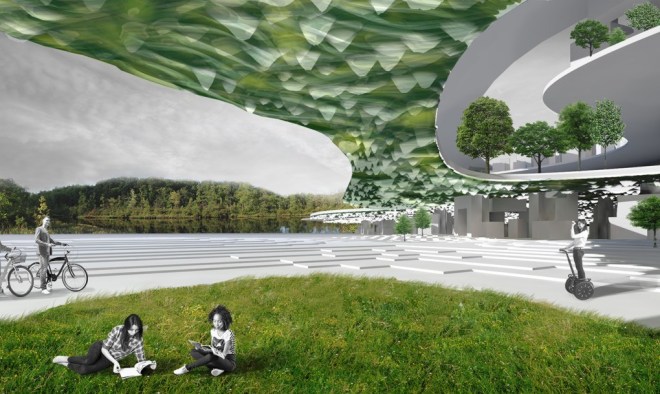 The design draws together recent trends in envisioning greener, more livable cities. Research shows that walkable urban areas confer social, economic, and environmental benefits to residents. There’s been a growing focus on architecture that actively engages with, and benefits, the environment: think buildings that puff up in the cold for insulation or walls that behave like human skin.

Liberland is not an officially recognized state, and its land is still disputed territory. It also remains unclear how the urban planning project would be funded. However, the design could still be implemented on a smaller scale, in cities that do exist, according to Ani.

But if the idea of living in vertical harmony with autonomously minded folk tickles your fancy, start filling out your citizenship application now.