There’s a problem with the sharing economy, says Julian Agyeman, an urban studies and environmental policy scholar at Tufts University. “While useful in some ways,” he says, “the concept of a ‘sharing economy’ limits this very human value — sharing — to an economic transaction.”

That’s the thesis of Agyeman’s most recent book, Sharing Cities, cowritten with environmental scholar Duncan McLaren. In the book, the two authors make the case for technology as a tool to transform cities into more equitable and more sustainable places — if applied correctly. But when smart-city programs aren’t designed to correct social inequality, Agyeman says, they end up furthering it. Take San Francisco, the de facto sharing-economy headquarters, where skyrocketing rents have made the city “unaffordable for all but the wealthiest.” 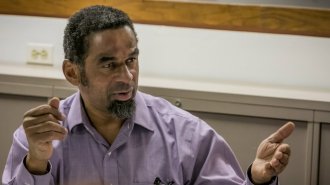 Agyeman wasn’t always focused on issues of justice. As an undergraduate, he studied botany and geography. But his interests shifted when he moved to London in the mid ’80s. “I realized that environment — even landscape — is not apolitical,” he says. “Landscapes are both real and socially constructed.”

So Agyeman turned to urban policy — how cities are formed, who has the power to shape them, and how they make up a greater human landscape. At the bottom of it all lies a question of human agency: It’s one thing to discuss ideologies and policies that guide growth, but how do the changes that transform a city actually take place?

“The sharing-cities concept offers a radically different vision of what the city can be,” says Agyeman. He holds up Medellin, Colombia, and Seoul, South Korea, as examples of what happens when public officials make a true commitment to a sharing vision, from more accessible urban spaces to smart, tech-informed public transit that serves all its citizens.

In a conversation with Grist, he explained how that concept could redefine our idea of what makes a city truly smart. (This conversation has been edited and condensed for clarity.)

Q.In the introduction to this book, you write that sharing is an inherent human trait — but isn’t there evidence that suggests humans are naturally selfish?

A.When we evolved as a species on the savannas of Africa, you couldn’t survive unless you cooperated and shared resources with bands of other pre-humans, and then humans. There has been a lot of study of people’s level of satisfaction with sharing — it makes people feel good. What’s probably happened is that, as societies became more complex, some of the more basic traits were overtaken by others, like selfishness and competition.

Q.How do most of us imagine “sharing” in cities today, and how is the Sharing Cities vision different?

A.We need to reinvent and recreate the urban commons as a place where humans interact in a much more relational way, not just in a transactional way. In a sense, what we’re saying is we want to move from the sharing economy to understanding whole cities as shared spaces. Modern technology gives us a kind of intersection of urban spaces and cyberspace, which we think could be a platform for a much more inclusive and efficient society.

Q.What are the opportunities — and pitfalls — to look out for as technology revolutionizes the way cities work?

A.A lot of people see this idea of the “smart city” as just the city that is wired for automation and efficiency. But we’re saying it’s only “smart” if it harnesses the capabilities and aspirations of the citizens. It’s not smart if it just sits there controlling traffic lights and streetcars. There’s a very great need to see technology as something in the service of solidarity and social justice.

Q.How can we direct technological innovation to be more people-focused?

A.If you don’t build a scheme from the get-go with equity and social justice in mind, it won’t simply happen. Let me give you an example. I was called up by people who run a bike-share scheme about a year ago. They said, it’s wildly successful, but here’s the problem: Very few low-income or minority people are riding our bikes.

My reaction was: On what basis is your scheme successful, if that’s the case? Did you involve any person from a low-income or minority group in the envisioning of your scheme? Because if it is envisioned by people like you, then it probably didn’t fit into what low-income and minority groups might want.

Q.Why has there been so much conflict around integrating sharing economy models, like Uber and Airbnb, into cities?

A.There’s nothing wrong with the concept of ride-sharing or sharing an apartment. But really they have ended up exacerbating problems. For instance, Airbnb is exacerbating housing crises in various cities. I think we want to see much more municipal regulation, in terms of making the sharing economy more equitable. We’re not anti-disruption — but I do think we have to have standards that can apply to worker hours, worker rights.

Q.You write in the book that there is no one path to a shared city — but there are common elements. What are the pillars of a truly shared city?

A.The fundamental principle is what we call the “sharing paradigm” — the understanding that human well-being depends on building, developing, and nurturing capabilities for all. The resources that we have to do that — from breathable air to education, energy, health care — are better understood as shared commons than private goods. We might decide, collectively, that the best way to manage and allocate resources is through market economies or public management, but the starting point is the recognition of the collective and shared nature of these resources.

For one thing, a sharing city would actively invest in public services and enable what’s called “coproduction.” The idea of coproduction is that you blur the boundary between producer and consumer. A good example: If you are discharged from Lehigh Regional Medical Center, in Pennsylvania, after having certain procedures, you will not be seen by a doctor or a nurse practitioner. You will be seen by a recently discharged patient who has had a similar procedure to you. And the recovery rate has been staggering -– far better than if you were seen by a doctor or a nurse. Why? Because this person can empathize with you.

Q.Can cities who aren’t yet thinking about the sharing paradigm on a large scale circumvent their own bureaucracy and political inertia to implement some of these kinds of changes?

Q.How would you advise someone who wants to get more involved in their own city?

A.This is about the right to the city. This idea fits in with seeing the whole city as this shared entity, with shared public services — shared health care, child pre-education, libraries, etc. City dwellers are already reimagining and redefining their environments — and these environments are, by their nature, collective urban commons, they’re shared spaces. So for people who want to get into this: Don’t accept your place as it is. Think about what it could become. In many ways, the sharing-city concept is a vision and a product — the sharing city — but it’s also a process, of remaking the city.