50 years after Selma, a search for environmental justice 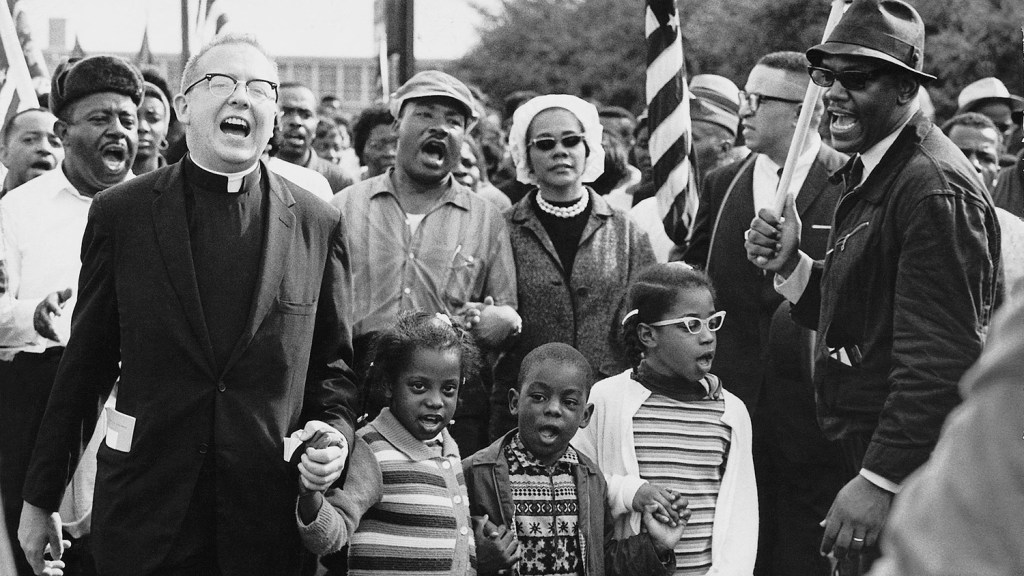 50 years after Selma, a search for environmental justice

Fifty years ago, on March 7, 1965, hundreds of African Americans lined up on the Edmund Pettis Bridge in Selma, Ala., to prepare for a nonviolent march to Montgomery, Alabama’s capital, to demand voting rights. Police and white vigilantes denied them their march by responding with violence, swinging barbed billy clubs, streaming tear gas, and letting loosing police canines (a practice police still employed today on blacks in Ferguson, Mo.). The attacked demonstrators were led by, among others, a young man named John Lewis, then a leader within the Student Nonviolent Coordinating Committee, and who today is a leading member of Congress.

Lewis will again lead a group across that bridge this weekend — a group consisting of Americans black and white, and politicians Democratic and Republican — on the 50th anniversary of what has been dubbed “Bloody Sunday,” for the carnage from that clash, which was broadcast across America via television. Lewis has not only been a leader for civil rights, but also for an environmental justice, the movement that emerged from civil rights activists protesting how America used communities of color as dumping grounds for toxic waste, pollution, and hazardous, undesirable land use.

Environmental justice will play a major role in the Selma 50th anniversary events, which began on March 5 and will conclude on the 9th. Leaders of the movement will hold a human and civil rights tribunal under the banner “Change is Gonna Come: Advancing an Environmental and Climate Justice Agenda in the South.” Residents of fenceline communities and social justice advocates from across the nation will testify about environmental problems in their neighborhoods before a jury of long-entrenched justice lawyers and EPA officials.

The South has long been a region where fossil fuel industries have pretty much had their way with mostly poor, black, brown, and Native American communities, mainly due to lax regulations and poor environmental and civil rights law enforcement. Just this week in Alabama, the environmental group Greater Birmingham Alliance to Stop Pollution (GASP) filed a civil rights complaint against the Jefferson County Department of Health for allowing Walter Coke, Inc. to continue emitting air pollutants over predominantly black communities (Grist wrote about this last April). A University of Alabama at Birmingham study found a correlation between low birth weight and household proximity to coke plants in Birmingham. It’s the second civil rights complaint GASP has filed on this matter in as many months.

“North Birmingham has historically served as a dumping ground for polluting facilities,” said long-time environmental justice scholar and activist Robert Bullard, who’s helping lead environmental justice activities in Selma. “The neighborhood was an environmental ‘sacrifice zone’ when I did my student teaching at a high school in the area way back in 1968.”

The latest concern, and one of the largest, for environmental justice activists in the South is a gigantic “clean coal” facility under construction in Kemper County, Miss. As Grist writer Sara Bernard recently reported, the operation is already taking an economic toll on the surrounding communities and provides no guarantees that it won’t add to pollution already saturating the state’s land, air, and water.

That plant is owned and operated by Mississippi Power, a subsidiary of Southern Company, which owns numerous dirty coal plants around the South, and has funded the work of recently discredited climate denier Wei-Hock Soon. Just so happens that Southern Co. is also a sponsor of the Selma 50th anniversary event this weekend. (Mississippi Power is not a sponsor, but two of Southern’s other subsidiaries, Georgia Power and Alabama Power, are sponsors.)

It’s doubtful that this sponsorship money will get these Southern powers off the hook during the environmental justice tribunal, however. And while it’s a head-scratcher to see the names of these polluting companies on the Selma sponsor list, it’s also worth noting what names are not on the list of sponsors: Green companies and environmental groups.

As I’ve stated before, green groups will need to start diversifying their staffs and portfolios — meaning better outreach and involvement in civil rights events like these — if they want more people of color to help advance their agenda. Same for environmental philanthropies that have failed to diversify their funding. As NAACP’s climate justice director Jacqueline Patterson recently told the L.A. Times: “The environmental community and solar industry have a ways to go in engaging with communities of color.”

Meanwhile, check out my homey Jay Smooth at Fusion break down the current significance around Selma’s 50th anniversary: