Al Gore thinks there's hope for humanity after all 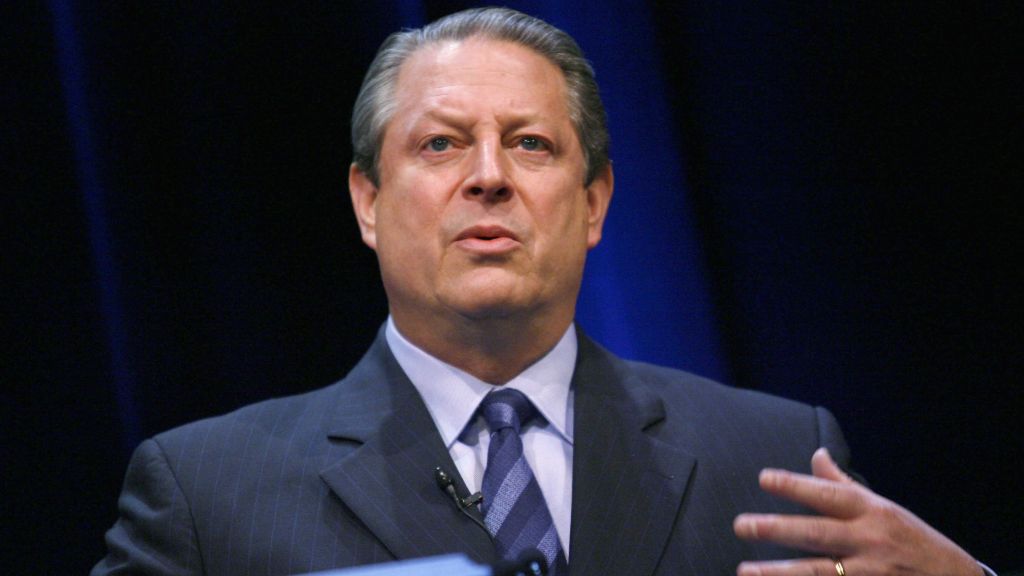 Al Gore thinks there’s hope for humanity after all

In the current rolling debate over whether we’re already the walking dead, given our presumptive too little, too late actions on climate change, Al Gore is boldly predicting victory in the latest issue of Rolling Stone.

“The forward journey for human civilization will be difficult and dangerous, but it is now clear that we will ultimately prevail,” writes Gore in his article, “The Turning Point: New Hope for the Climate.” “The truly catastrophic damages that have the potential for ending civilization as we know it can still — almost certainly — be avoided.”

That’s a lot of clarity and certainty, especially for a magazine that just two years ago terrified us with an article by climate activist (and Grist board member) Bill McKibben called “Global Warming’s Terrifying New Math.” That math pointed at fossil fuel companies as the primary culprits for coming destabilization. As for building a campaign against those companies, McKibben wrote, “we may have waited too long to start it.” Ezra Klein echoed these fears recently in his “7 reasons America will fail on climate change” treatise in Vox.

But Gore pushes back against such notions, especially Klein’s argument that the global effort needed against climate change is “completely unprecedented,” which I dispelled as well.

“There were many no’s before the emergence of a global consensus to abolish chattel slavery,” writes Gore, “before the consensus that women must have the right to vote, before the fever of the nuclear ­arms race was broken, before the quickening global recognition of gay and lesbian equality, and indeed before every forward advance toward social progress.”

As a leading figure in climate talks in both the United Nations and among the private sector, Gore was able to point toward a number of hopeful signs in global climate negotiations worth highlighting:

My main concern here is who that leftover 20 percent is. If they are, as I suspect, those living in poor countries across Africa, Asia, and South America, then I’m fearful of an energy apartheid regime. Gore must have felt my fear, though, because:

2. “Bangladesh is installing nearly two new rooftop PV systems every minute — making it the most rapidly growing market for PVs in the world. In West and East Africa, solar-electric cells are beginning what is widely predicted to be a period of explosive growth.”

I had to fact-check that last statement to make sure Gore wasn’t just padding the case for hope. I checked in with the homey Dayo Olopade, who spent much of last year in Africa researching this for her book The Bright Continent: Breaking Rules and Making Change in Modern Africa, released in March. Her prognosis on Gore’s “explosive growth” assessment: He’s “broadly accurate.” Solar sources are not only competitive and attractive throughout Africa, but already in wide use, Olopade told me. This can only be a good sign.

3. “At the turn of the 21st century, some scoffed at projections that the world would be installing one gigawatt of new solar electricity per year by 2010. That goal was exceeded 17 times over; last year it was exceeded 39 times over; and this year the world is on pace to exceed that benchmark as much as 55 times over.”

Gore says such growth is comparable to the industry boom of cellphones, which were predicted to only claim about 900,000 subscribers by the year 2000 when first introduced in the early 1980s. When the 20th century came to an end, there were over 109 million subscribers. Now there are 6.8 billion. And we have solar-powered cellphones.

4. “China’s new president, Xi Jinping, has launched a pilot cap-and-trade system in two cities and five provinces as a model for a nationwide cap-and-trade program in the next few years. He has banned all new coal burning in several cities and required the reporting of CO2 emissions by all major industrial sources. China and the U.S. have jointly reached an important agreement to limit another potent source of global-warming pollution — the chemical compounds known as hydro-fluorocarbons, or HFCs.”

Klein and others have scoffed at those who’ve feigned hope in the face of climate catastrophe, telling them — to quote Jay Z — “We don’t believe you, you need more people.” Or as rapper Jean Grae put it, “You don’t just need more people, you need China.” Well, now we have China.

Reduce demand, and the trailer-loads of greenhouse gas emissions from fossil fuel plants becomes less and less of a thing. End of story.

It’s not all sweet, though. Gore presents a litany of bitter facts in his 5,000-plus word article that throw plenty of shade over his otherwise sunny analysis. Like the fact that global fossil fuel subsidies are 25 times larger than those for renewables. And that last April, the average carbon dioxide concentrations in the Earth’s atmosphere exceeded 400 parts per million on a sustained basis for the first time in at least 800,000 years, and probably for the first time in at least 4.5 million years.

Yes, we’ve already done a tremendous amount of damage, and for that we’ll pay the price. Lest you feel comforted that the U.S. will get off easy, climate experts have already rendered the Norfolk, Va. naval base — the world’s largest — a goner due to rising sea levels in the future. Rolling Stone, for its part, says we can kiss Miami goodbye.

But if there’s one overarching theme to Gore’s appeal for hope, it’s that renewable energy is getting less expensive, while coal energy is becoming more of a liability for markets. People like new things, and cheap — especially Americans. So to prevent “game over,” we need only keep looking toward the sun.

“There is indeed, literally, light at the end of the tunnel,” Gore concludes, “but there is a tunnel, and we are well into it.”