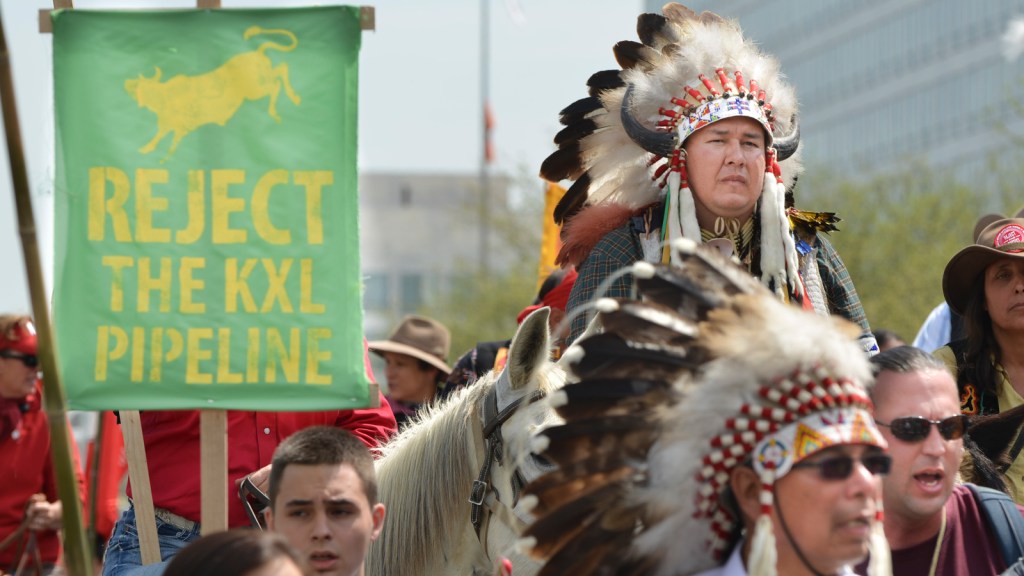 What a difference a year makes. At the end of 2013, Keystone XL looked like a done deal. KXL South (a.k.a. the Gulf Coast Pipeline) was already built and weeks away from being turned on.

Now, a year later, that renowned pinko/green publication known as the Wall Street Journal writes that the fight against Keystone XL has been so successful that it’s become the training model for at least 10 other anti-pipeline fights. Seriously. There’s a slideshow and everything.

The groups coordinate their moves in regular conference calls and at meetings in Washington, D.C., and elsewhere.

Anti-Keystone group Bold Nebraska has been teaching classes on pipeline-delay tactics to activists in Minnesota, Iowa and Western Canada. A PowerPoint presentation used by Bold Nebraska founder Jane Kleeb said: “Strike a balance between national, regional and local interests with a focus on LOCAL.”

You know that term NIMBY? As in people who conduct “not in my backyard” campaigns? Well, there is one reason why NIMBYs have such a bad reputation: The realm of property rights and local government is one of the few places in our governmental system that an individual person can stymie a better-connected and better-funded opponent. Hence the focus on building alliances between people who are geographically close but have never collaborated before — which has proved surprisingly effective.

Even if Keystone is built — which is not looking likely, what with the North Dakota permit that expired in July, the Senate voting against it, and the president sounding like he was kind of making fun of it on the Colbert Report — it will still have cost twice what TransCanada intended to pay. All of this activism has made building fossil fuel infrastructure in certain areas significantly more expensive.

Using Keystone XL as a template, national environmental groups are joining with local activists in a strategy aimed at prolonging government reviews of proposed pipeline routes and their environmental impact.

As a result, six oil and natural-gas pipeline projects in North America costing a proposed $15 billion or more and stretching more than 3,400 miles have been delayed, a tally by The Wall Street Journal shows. At least four other projects with a total investment of $25 billion and more than 5,100 miles in length are facing opposition but haven’t been delayed yet.

This kind of expense is the new normal, the president of Kinder Morgan’s business segment in Canada told the Journal. Russ Girling, TransCanada’s president and CEO, said that TransCanada will “no longer pursue certain planning, engineering and regulatory steps at the same time because of the opposition.” Projects like Keystone that once took an estimated four years to journey from blueprint to full operations now take more like eight.

Enbridge, which has pipeline problems of its own, agrees.

Enbridge is grappling with delays on four pipeline projects worth nearly $10 billion combined. “We used to think about risks in the energy business primarily related to how we are going to get more supply,” said Al Monaco, the company’s president and CEO, during a speech to the Economic Club of Canada in Calgary. “The reality is that today in North America, it’s not about that. It’s about how we get our product to market.”

The reality too is that slowing pipeline construction has led to a boom in oil by rail, which, thanks to some very old laws and infrastructure and a particularly wussy National Transportation Safety Board, is just as risky as pipelines, if not more so. It’s likely next year we’ll see more coordinated attempts to turn the risks of oil-by-rail into a cost borne by oil producers, possibly through a long-overdue increase in the liability insurance requirement for shippers.

But that’s all in the future. Let’s just pause for a moment to reflect on how much, in a few short years, things have changed.