As U.S. retreats from climate leadership, China steps up. Beware. 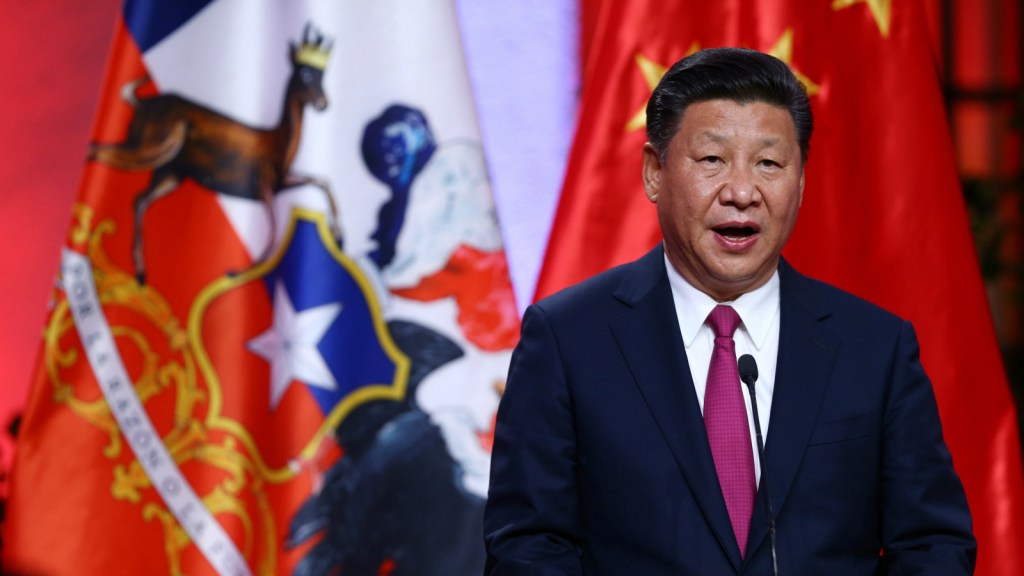 As U.S. retreats from climate leadership, China steps up. Beware.

On a brisk November day, a Democratic president — often decried as aloof and professorial — arrived in the French capital to finalize the negotiations around a central achievement of his presidency. In the third year of his second term, this president, whom history will remember (somewhat ironically) as a Nobel Peace Prize winner, had fought tooth and nail to craft this agreement according to his vision. If successful, it would lay the groundwork to address perhaps the world’s most pressing crisis through a new system for international cooperation and mutual verification.

Despite the president’s best efforts, a Republican Senate thwarted him at every turn, refusing to even consider approving his new agreement. And barely a year later, a Republican won a commanding victory in the presidential election, shifting the nation away from his proactive engagement with the wider world. This rejection of the liberal international order harkened a new era of isolationism. While it didn’t look like the agreement would fall apart immediately, the enormous, United States-shaped hole in its foundation left open the potential for it all to collapse like a Jenga tower.

But that wasn’t President Obama and the Paris Agreement on climate change. That was President Woodrow Wilson in 1919 and his plans for the League of Nations at Versailles.

In the same way that an incoming Harding administration marked the end of a noble experiment of American participation in a wider project of global governance, an incoming Trump administration promises to be a watershed for American unilateralism in the face of a critical worldwide threat.

Trump, who has famously referred to climate change as a Chinese-designed hoax to make American manufacturing uncompetitive globally, repeatedly promised to repudiate the agreement altogether. There are reports that his transition team is exploring ways to withdraw from it quickly rather than go through the four-year exit process outlined in the agreement itself. Trump more recently said he’s keeping “an open mind” about the agreement, but one must remember to take Trump’s words with an entire shaker of salt.

The international community, whose climate delegations were meeting at the 22nd Conference of the Parties (COP) in Marrakech, Morocco, when the election results came in, wasted little time in trying to push back against the prospect of President-elect Trump rejecting American participation in the Paris Agreement. As the Financial Times put it, “China has warned Donald Trump that he will be defying the wishes of the entire planet” if he pulls back from the agreement.

Former French president turned perennial candidate Nicolas Sarkozy went so far as to call for a 1–3 percent carbon tax on American goods entering the European Union. E.U. leaders would have little power to implement such a punitive measure, and they have their own crises to worry about (Brexit). But if the U.S. pulled out of the Paris Agreement — or, worse, the entire U.N. Framework Convention on Climate Change — that would certainly throw a massive wrench into E.U.-U.S. relations.

The Paris Agreement would get weaker

The Paris Agreement could survive an American stepping-back — indeed, the negotiations in Marrakech resulted in a new partnership to help nations make their climate plans workable. But without U.S. participation, the agreement would be much less robust than its framers envisioned.

In the negotiations leading up to Paris, the U.S. pushed for nations to be as ambitious and transparent as possible in crafting their intended nationally determined contributions, and as a carrot, the U.S. broadcast its willingness and ability to contribute money to the Green Climate Fund, which helps developing countries cope with climate change. What happens to the gears of cooperation on climate change if the American grease that kept them turning is removed?

Under Obama, the U.S. led the charge for aggressive, uniform measures on monitoring, reporting, and verification (MRV). U.S. withdrawal would likely lead to watering down the already weak MRV components that did make it into the Paris Agreement. Prior to the Paris conference, India organized a meeting of so-called Like-Minded Developing Countries (LMDCs), which included Argentina, Iran, Saudi Arabia, and Vietnam, to fight against MRV language that would require countries to continually ramp up their carbon-reduction pledges at set intervals. (We wrote here previously about the importance of MRV.) They also rejected uniform reporting standards, which are essential for enabling parties to name and shame one another, which is Paris’ central enforcement mechanism.

Without American negotiators holding other countries to these commitments, India and other LMDCs may begin to chip away at these provisions at the next four COPs. In fact, India’s environment minister, Anil Madhav Dave, is already making coy statements about his country’s commitment to Paris in the event that the U.S. drops out.

In the lead-up to Paris, the U.S. also pushed aggressively to account for gender issues in climate talks, thanks in part to then-Secretary of State Hillary Clinton. This focus may fall to the wayside as well.

China would get stronger

More importantly, if the U.S. abrogates its role here, it would create an enormous power vacuum in global climate relations. China has already indicated it plans to fill this void — and that could give the country more power in other arenas as well.

According to Reuters, “Beijing is poised to cash in on the goodwill it could earn by taking on leadership in dealing with what for many other governments is one of the most urgent issues on their agenda.” Zou Ji, China’s lead climate negotiator in Marrakech, told the news agency, “Proactively taking action against climate change will improve China’s international image and allow it to occupy the moral high ground.”

On the surface, China taking a more proactive role on climate matters may seem positive. After all, it is the single largest greenhouse gas–emitting country on the planet. Many climate observers seem sanguine about China taking on the role of global climate leader. Andrew Light, the former senior adviser to U.S. Climate Envoy Todd Stern, told Reuters that he hoped Beijing would pick up where the U.S. leaves off.

But this is where the aftermath of the Versailles Treaty and the U.S.’s failure to join the League of Nations provides a cautionary tale. Other countries filled the U.S.-shaped void on the international stage, and the ripple effects were devastating. Without the U.S. acting as a check on their power, British and French leaders implemented excessively punitive measures on Germany’s fragile Weimar Republic, ultimately dooming it. And, when fascist regimes rose from the rubble of democratic governments in Germany and Italy, the League of Nations failed to counter their imperial aims.

The consequences of the U.S. stepping down on climate change may not be quite as drastic, at least in the near term, but they will likely affect the lives of millions.

For years, the Chinese government has used climate change as cover for its authoritarian aims. As The New York Times reported last month, Beijing has forcibly relocated and settled nomads from ethnic minority groups, purportedly over concerns that their way of life was exacerbating desertification. University of Colorado-Boulder professor Emily Yeh has documented other such moves: “the environmental protection programs that have been celebrated by both western observers and Chinese proponents … had the effect of further marginalizing already politically and economically marginalized citizens.”

China’s newfound climate leadership may also erode the U.S.’s standing in sub-Saharan Africa. For years, Chinese leaders have attempted to purchase goodwill and diplomatic support from African governments through infusions of foreign direct investment (usually from state-owned enterprises) and aid. If the Trump administration reneges on Obama’s pledges to the Green Climate Fund, the Adaptation Fund, and other bilateral and multilateral climate change funds, developing countries from Africa and elsewhere will likely become even more reliant on China and other donors with less humanitarian aims.

Such a change could seriously erode the diffusion of American democratic values, including transparency and accountability, the rights of marginalized peoples, and environmental impact assessments. It may become much easier for authoritarian leaders to spend GCF dollars on projects that destroy the cultures of indigenous groups under the guise of climate adaptation.

Could concerted international pressure force Trump to change tack, as he is apparently prepared to do on matters like jailing Hillary Clinton? What about the urging of the business community? Or would such calls merely lead Trump to double-down on a move that would be emblematic of his promise to Make America Great Again, regardless of the consequences at home and abroad? We will soon find out how intent President Trump is on withdrawing from climate action — and what can be salvaged from the spirit of Paris.

Neil Bhatiya is a New York-based climate and energy analyst. Tim Kovach is an independent analyst and blogger from Cleveland who researches and writes about climate change, disaster risk reduction, and environmental peace-building at timkovach.com.