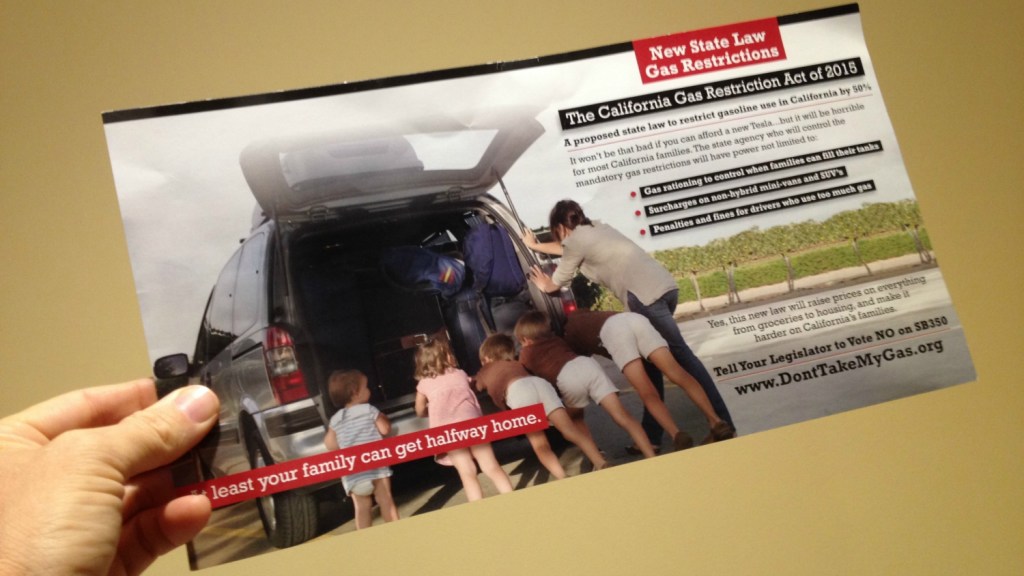 Lying Flyers and the Liars Who Mail Them

California is continuing to lead the way on climate solutions, with a proposed bill working its way through the legislature to further reduce carbon pollution.

But the California Drivers Alliance is up in arms. What is that? Well, it must be an alliance of California drivers, right?

In a mailing sent to California households (including mine), Big Oil has risen to a new level of hysterical ooga booga. Not content to rely on the facts, they claim the legislature is considering the “The California Gas Restriction Act of 2015.” This new law will result in “gas rationing to control when families can fill their tanks, surcharges on non-hybrid mini-vans and SUV’s, penalties and fines for drivers who use too much gas,” and lord knows what else.

The problem? There is no such bill.

Instead, California is considering Senate Bill 350 (hat tip to 350.org, anyone?), also known as the Clean Energy and Pollution Reduction Act of 2015, which would increase California’s share of electricity from renewable sources to 50 percent, increase building energy efficiency 50 percent, and cut California’s use of oil in half through new technologies, vehicle efficiency, and better planning.

The bill, sponsored by Senate leader Kevin De Leon (D), has passed the Senate and is now under debate in the Assembly. Gov. Jerry Brown (D) is eager to sign it. As Brown said in a statement on Aug. 20, “New scientific reports now make it crystal clear that climate change is already affecting California and the Southwest in the form of higher temperatures and a more devastating drought. It’s time for Republicans, foot-dragging corporations and other deniers to wake up and take sensible action before it’s too late.”

Here’s another example of WSPA’s cluelessness: On its California Drivers Alliance website, it warns, “A 50 percent reduction in gasoline and diesel use through improved fuel economy would require the average to increase to 50 miles per gallon in 15 years.” Apparently the group missed the fact that three years ago the Obama administration set fuel economy standards of 54.5 miles per gallon for the 2025 model year.

Adrienne Alvord, California and Western states director for the Union of Concerned Scientists, sums up the situation: “the simple truth that explains all of WSPA’s lies about SB 350 is that the legislation, while good for people, is bad for oil companies.”