“[T]here are no demonstrated foreseeable effects of any GHG emissions.” While these words may have composed a halfway reasonable sentence a few decades ago, flat-out denial of anthropogenic climate change is less in vogue today. Even ExxonMobil acknowledges that greenhouse gases need to be cut.

But not Peabody Energy. The world’s biggest private-sector coal company is still clinging desperately to unconditional climate denial. The company’s position was demonstrated all too clearly in 71 pages of comments it submitted to the White House Council on Environmental Quality this spring, arguing against considering greenhouse gas emissions as part of analyses conducted under the National Environmental Policy Act.

Here are three more of the most absurd quotes from Peabody’s document.

1. “While the benefits of carbon dioxide are proven, the alleged risks of climate change are contrary to observed data, are based on admitted speculation, and lack adequate scientific basis.”

There is a 97 percent consensus on the science of climate change, but the Peabonator apparently thinks that “adequate scientific basis” means hitting triple digits. Doubting the science positions the company squarely among the ranks of obfuscators like Fred Seitz, the same goonish ringleader who worked on the atomic bomb, fought to discredit the link between smoking and lung cancer, and remains an avid skeptic of anthropogenic climate change. Immaculate moral compass on that one.

2. “Increases in CO2 emissions worldwide have led to prosperity, not to the predicted global temperature increases or adverse effects.”

Try telling that to climate refugees from drowning Pacific Islands or Syrian farmers hit by the worst drought in recorded history. Unless “prosperity” has somehow become synonymous with “relentless suffering,” it’s a mind-bogglingly hard sell to argue that CO2 emissions in their own right are good for much more than absorbing and re-emitting solar radiation.

3. “U.S. coal use has a strong relationship with increased life expectancy.”

Here’s the accompanying chart from Peabody: 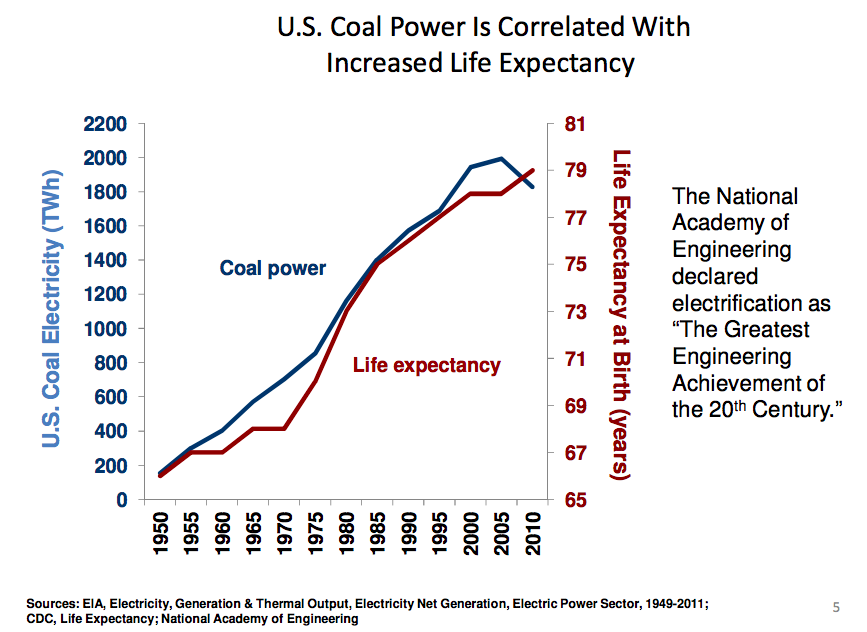 Bask in the sweet, sweet warmth of mistaking correlation for causation. Colorful lines are indeed helpful for catching a policymaker’s eye — good call, Peab’ — but there’s just no reason to believe these lines have anything to do with one another. Consider these correlation charts, from author Tyler Vigen:

And yet nobody’s arguing that Nic Cage is pushing those people into the pools. (Right?)

It’s an odd world in which such powerful interests are blinded by such massive horse blinkers. And you thought the Seattle earthquake was terrifying.

Arizona and California are ignoring the science on water