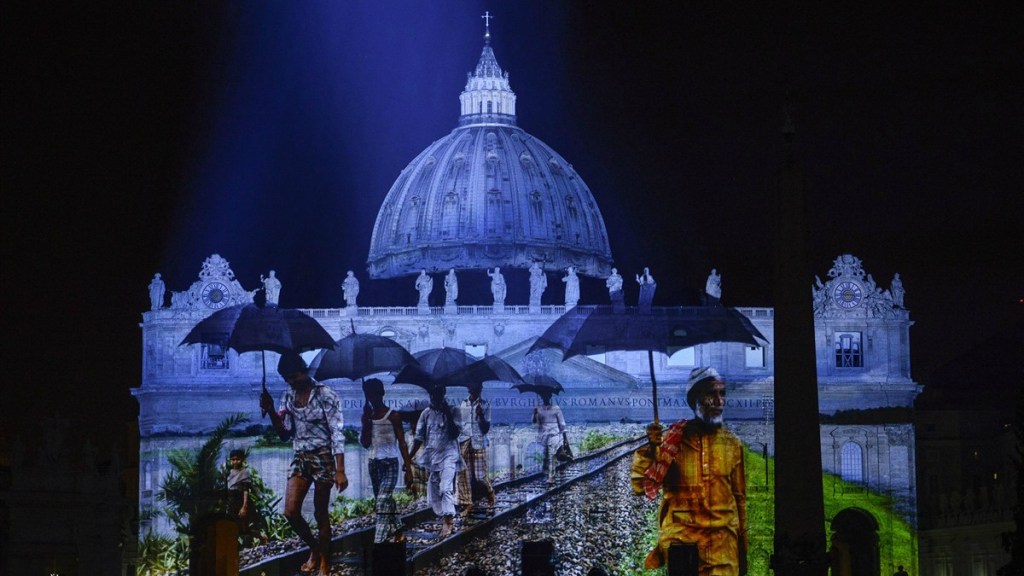 Remember the winter of 2005, when your cool uncle thought this blurry video of a light show projected on a house to the tune of Trans-Siberian Orchestra’s “Wizards in Winter” was the most fascinating thing he’d ever seen? Well, we’ve come a long way in the realm of architectural projections in the last decade — and now, even the pope is getting into them.

Earlier today, Connect4Climate put on a large-scale public art installation to project images of life on Earth onto the façade of St. Peter’s Basilica in Vatican City. The installation, called “Fiat Lux: Illuminating our Common Home,” is a prettier addition to Pope Francis’ landmark encyclical released in June, which called for swift action on climate change.

The event was meant to serve as a call to preserve our “common home” and inspire an ambitious outcome at the Paris climate talks by “sending a message of light from the Vatican,” according to EcoWatch.

Though we have experienced a dearth of Pope Francis news relative to the wild days of his visit to the U.S. in September, don’t worry — the guy is still quite active when it comes to climate change, even when he’s not popping up in your newsfeed and Twittersphere several times a day. On Sunday, for example, he prayed for successful negotiations at the Paris Climate Conference, which is currently underway.

“For the sake of the common home we share and for future generations, every effort should be made in Paris to mitigate the impact of climate change and, at the same time, to tackle poverty and to let human dignity flourish,” he said, according to Vatican Radio.

Pope Francis’ work shifted popular opinion on climate change among Americans and his Catholic entourage. Let’s just hope that diplomats in Paris will be swayed by his message — and maybe his crazy light show, too.