About 25 percent of all fossil fuels extracted in the United States come from federal lands. That’s a whole lot of coal, oil, and gas that presidential candidates Bernie Sanders and Hillary Clinton are talking about when they debate ending fossil fuel production on public lands.

In a new report, the Stockholm Environment Institute (SEI) forecasts the kinds of cuts in fossil fuel production the country would need to make to be consistent with a 2 degrees Celsius warming scenario: 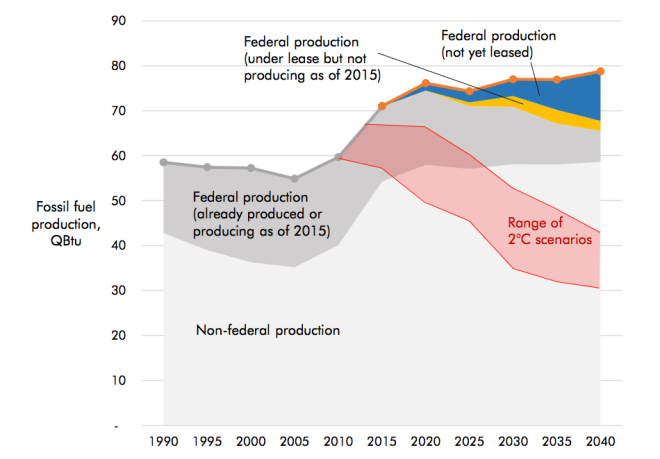 The first thing that’s clear from this chart is ending fossil fuel development on federal lands still isn’t enough to stop climate change at 2 degrees. Even the dream scenario, in which we stop drilling and mining on all public lands tomorrow, doesn’t cut it.

And nobody’s even really proposing the dream scenario. Sanders’ proposed Keep It in the Ground Act to ban fossil fuel development on public lands only ends new federal leases — the blue chunk in the chart above. It says nothing about the land already leased and under production.

Even with the Obama administration’s Clean Power Plan in place, SEI expects fossil fuel production to rise by 11 percent by 2040 — unless we get serious about passing new climate legislation. To line up with a 2-degree goal, the country would need to slice its production by 40–60 percent.

Getting to 2 degrees doesn’t just depend on what the president can do; it requires the entire U.S. economy to shift toward clean energy — along with the rest of the world.