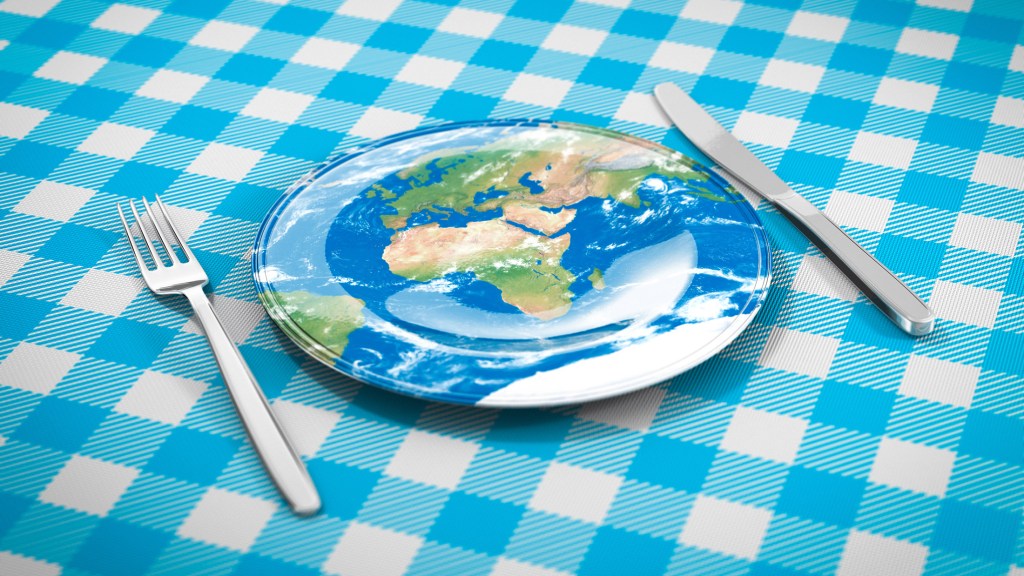 We all know that food waste is a huge problem. The world squanders about one-third of its food supply, even though 800 million people are currently undernourished. And since agriculture is responsible for between 22 and 24 percent of anthropogenic greenhouse gas emissions, that means we’re pumping loads of climate-altering chemicals into the atmosphere for absolutely no reason.

And according to a new study published in the latest issue of Environmental Science & Technology, the situation is bound to get a lot worse if the rest of the world continues to shift toward a meat-heavy Western diet. Here’s what we’re looking at:

In 2010, we ended up with 20 percent more food than we needed. That meant a jump in GHG emissions from that surplus of about 300 percent from 50 years ago. Looking forward, those emission could increase another 2.6 to 3.6 times by 2050 thanks to dietary changes, according to the study.

So far, so apocalyptic. But things get more complicated on a country-by-country basis. That’s because every country has its own appetite, depending on its population’s activity level, average body weight, and the age and sex breakdown of its people. Countries like the U.S. and Australia that tend to be heavier, for example, demand more calories per person that China or India.

So looking forward, the researchers mapped out three potential trajectories for each country that they analyzed. The population’s weight could either remain the same, become more Japan-ish (i.e. thinner), or more U.S.-ish (i.e. heaver). And what they found was that if the world started to look more Japan-ish, global demand could be 0.9 percent less than the amount of food available in 2010. If the world started to look more U.S.-ish, demand could be 73 percent more than the 2010 supply. And if the world maintained its figure, we’re looking at between between 2 and 20 percent higher demand than the 2010 supply.

The problem is, it’s very fun to eat like an American. So other countries are likely to spiral into obesity like the rest of us, if they get the chance. In fact, this is already happening. And it’s bad news not only for the health of these growing populations, but also for the health of the planet, since the Western diet is very meat heavy.

In China alone the amount of animal products in the food supply increased by 138 percent over the last 30 years, the researchers report. At the same time, the country experienced a 13-fold increase in emissions from surplus food. Looking ahead, China and other countries that are experiencing swift economic development are likely to be the world’s next “food waste hot-spots” by mid-century, the researchers report, and emissions from surplus food are likely to be highest in South Asia, East Africa, and South America.

That said, we can actually do something about this. Grist’s own Nathanael Johnson outlined a plan of action here, so hopefully we’ll have this all worked out before Antarctica melts. In the meantime, enjoy the dumpster diving while it’s still good.