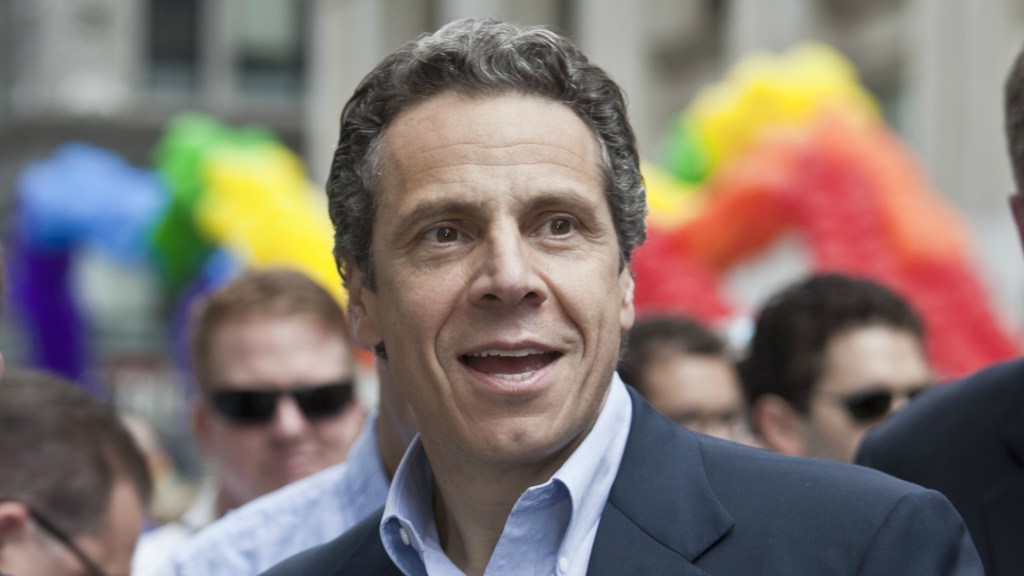 It was a long time coming, but, finally, New York Gov. Andrew Cuomo (D) announced Wednesday afternoon that he will ban hydraulic fracturing in the state. It’s a major win for fracking opponents.

Approximately 40 percent of New York state sits over the Marcellus Shale natural gas formation, which, thanks to the development of high-volume hydrofracking (HVHF) or fracking technology, would now be easily accessible to drillers — if they could get the OK from the state. The Upstate region where the natural gas is found, known as the Southern Tier, is New York’s most economically depressed area. Fracking is already widespread in neighboring Pennsylvania, as are the ensuing environmental, health, and safety problems.

New York has had a fracking moratorium in place since Cuomo’s predecessor David Paterson (D) issued one in 2008. Cuomo has repeatedly delayed a permanent decision pending study by the state environmental and health departments, and those studies have dragged on and on. The widespread belief in New York political circles was that Cuomo was trying to avoid angering either Upstate Republicans or anti-fracking activists by making the decision before his reelection in November. Cuomo is interested in running for president, and has been positioning himself as a moderate. He faced a surprisingly strong challenge from law professor Zephyr Teachout in the Democratic primary. Teachout attacked Cuomo from the left on a number of issues such as economic inequality, corporate influence over government, and fracking, but her campaign credited the “fracktivists” with being their best organized and most vocal constituency.

It seemed possible in the wake of the primary that Cuomo would try to mollify his liberal critics by banning fracking. But more recently he dismissed his opponents as interest-group whiners and hinted that he was going to stay his centrist course. In an October interview with New York magazine, he spoke dismissively of “the fracking people, probably the largest single issue for activist Democrats, who are upset that I won’t ban it.” Privately, local environmental activists expressed doubt that Cuomo would ban fracking, noting that his administration has been uninterested in meeting with them.

But Cuomo’s own agency heads reviewed the scientific literature and came to the conclusion that fracking was unsafe for New Yorkers. New York City draws unfiltered water from Upstate, and Cuomo’s administration determined that fracking could endanger the watershed. As Cuomo said at a cabinet meeting on Wednesday, where he made his announcement, he always intended to follow the science and the advice of experts wherever it may lead. “I’m not a scientist,” said Cuomo. “I’m not an environmentalist.”

In a presentation at the cabinet meeting, the acting state health commissioner, Howard A. Zucker, emphasized that there’s growing evidence that fracking endangers human health. Preliminary studies and anecdotal evidence suggest that fracking operations can contaminate nearby air and water, causing myriad health problems. And there are few long-term studies of the health effects, so there’s insufficient evidence to indicate that fracking would be safe over the long haul. It doesn’t help that gas companies keep secret the chemical concoctions they use during fracking.

“There are many potential health effects from HVHF,” said Zucker. “More importantly, there are many potential red flags because … [it is] not adequately studied.” One study, Zucker noted, found “higher rates of heart and nervous system birth defects from mothers near gas wells.” And, he added, “There are no relevant studies looking at soil contamination and human health effects.” This is important, Zucker explained, because the same areas that would have fracking wells also grow crops and raise cows, so soil contamination means food contamination. Also, small children play in the dirt and are especially vulnerable. Zucker concluded that he wouldn’t want his own children living near a fracking well. “If you don’t believe you would let your children live there, then your duty is to suggest that no children should live there,” Cuomo concurred.

While there is no reason to disbelieve Cuomo when he says that he followed the advice of state officials in making his decision, the hard work of anti-fracking activists also clearly played a role. In 2012, Cuomo flirted with allowing fracking and backed off under pressure from activists. Fracktivists followed Cuomo everywhere on the campaign trail this year, and celebrity spokespeople like Mark Ruffalo helped them garner media coverage. The strong organizing in potentially affected towns also meant that many of them might ban fracking independently if the state didn’t; a recent court ruling affirmed the right of cities and towns to do so. As Cuomo observed on Wednesday, between potential local bans and other restrictions such as keeping fracking away from neighboring homes, schools, and watersheds, there would be hardly anywhere left to frack anyway.

“[Cuomo] pointed out himself the relentless public pressure,” said Patrick Robbins, a spokesperson for the Sane Energy Project, a New York-based organization that promotes shifting from fossil fuels to renewable sources of energy. “I also think it’s important to note the role of organizing at the local level — the [environment] commissioner mentioned many times the impact that local bans would have on the profit margins of this industry.”

But as for climate change …

The only troubling part of Wednesday’s meeting came at the end when Cuomo took questions from the press. One reporter noted that Cuomo had focused entirely on the local health and environmental impacts of fracking, not on the global warming implications of natural gas production. (Natural gas produces half as much CO2 as coal when burned, but with methane leakage it may be just as bad for climate change as any other fossil fuel.) Cuomo reiterated his recent bizarre assertion that discussion of the causes of climate change is “political.” In response to a climate question, Cuomo said, “What I want to keep the focus on is extreme weather because that’s inarguable; it’s non-political.” He went on to echo his earlier comments about not being a scientist. “As a lawyer, my personal opinion is that [climate change] is partially caused by humans,” said Cuomo. But he hastened to add that he doesn’t know what proportion of climate change is anthropogenic or whether it’s “disproportionate.”

Everything about Cuomo’s take on climate science is inexplicably weaselly and nonsensical. There is no question or answer as to whether human activity is a “disproportionate” cause of climate change; there is no correct “proportion” for humans to warm the planet by emitting greenhouse gases, other than zero. Cuomo doesn’t have to be a scientist to know whether human-made climate change is real. He can simply accept the findings of 97 percent of papers on the subject published in peer-reviewed scientific journals. Just as he listened to the advice of medical and health experts when he made his decision on fracking, he could listen to climate scientists about the causes of warming.

Even politically, it makes no sense. Cuomo is mimicking cowardly Republicans who dodge questions about climate science by noting they aren’t scientists so as to avoid either angering their base by accepting it or sounding like an idiot by rejecting it. Cuomo is a Democrat, and unless he plans on switching parties, he has nothing to fear from accepting the scientific consensus. Indeed, he did accept it as recently as last year.

Cuomo’s stance on climate is a problem because it means that, while he happens to have reached the right decision on fracking, he may not do so in other areas. Shifting New York’s energy portfolio to renewables — something the state is behind its own goals on — might do more to combat climate change than banning fracking. But if Cuomo isn’t convinced of climate science, will he be seriously motivated to push for a switch? Ironically, on the very same day that he released his fracking decision, the Long Island Power Authority chose not to vote on whether to move forward with a proposed offshore wind farm, angering local environmental groups, which blamed Cuomo as well as LIPA.

Banning fracking is not the end of a clean energy future, but just the beginning.