Amid all the celebration over America’s plunging gas prices — down some 40 percent since June — it’s easy to forget a very basic fact: In a global sense, U.S. fuel has been cheap for years. In late 2012, for instance, the United States ranked toward the bottom of a world list of gas prices, wedged between the likes of Tunisia and Chad on one side and Russia and Kazakhstan on the other. Most first-world countries paid at least double what America did then, just as they do today.

The situation is hardly a happy coincidence for U.S. motorists. On the contrary, American fuel prices are kept down artificially by low gas taxes that fail to address the true social cost of driving. An international comparison of gas taxes shows the United States in back of the pack by a wide margin: 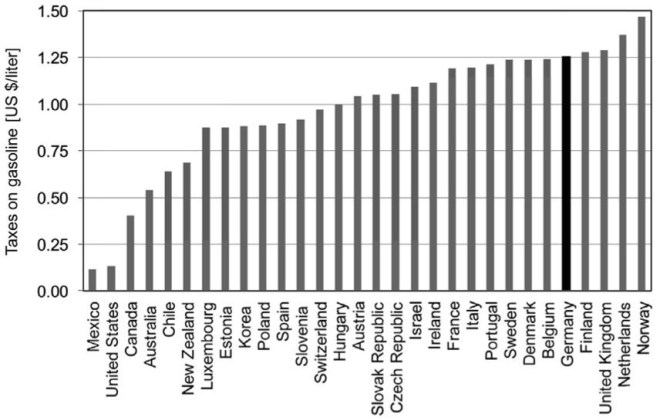 This national refusal to increase gas taxes — which have gone unchanged at the federal level since 1993 — has two enormous impacts on everyday life. The first is that drivers no longer cover the cost of road and bridge maintenance, as the gas tax originally intended. UC Davis scholar Mark Delucchi recently estimated that drivers fall short in this respect by 20 to 70 cents per gallon. General taxpayers have made up the resulting budget gap in recent years, whether they drive or not.

That’s not a horrible injustice, since most Americans still travel by car. The far bigger problem is that America’s gas taxes are too low to offset what economists call the “externalities” of driving. Don’t let the word spook you; all it means is that driving creates all sorts of negative social impacts that aren’t being compensated for: personal time and work productivity lost to traffic congestion, lives lost to car crashes, and health risks created by air pollution, to name just a few.

When Delucchi tallied up these costs, at least as they existed for 1991 driving patterns, he estimated them at upwards of $3.3 trillion a year (below, our highlight). As he told me recently by email, discussing the use of that figure in an infographic for The Atlantic, “clearly driving is way underpriced.” 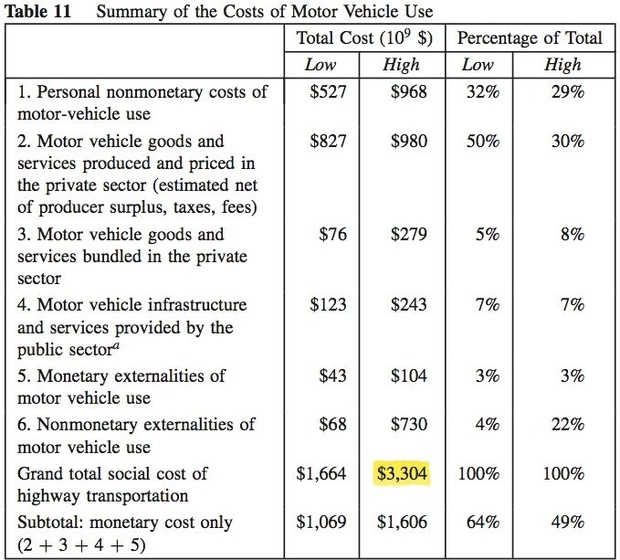 So what would gas taxes look like if they reflected the true social cost of driving? It’s no easy question to answer, but for some sense of one we turn to economist Stefan Tscharaktschiew of the Dresden University of Technology, who recently tried to calculate the “optimal” fuel tax for Germany. His goal was to find a number that not only reflected all the social impacts of driving, but also one that accounted for changes in behavior that would result from more expensive gasoline.

After crunching the numbers, Tscharaktschiew reached an optimal gas tax of .96 euros per liter — a figure that amounts to more than $4.36 a gallon in American money. Mind you, that doesn’t include the actual market cost of gasoline. In other words, the optimal German gas tax, by itself, roughly doubles what average Americans are right now paying total at the pump.

Tscharaktschiew explains to CityLab that most of this optimal figure (.85 euros) reflected externalities like congestion (.4 euros), safety (.2 euros), climate change (.1 euros), and pollution (.09). He actually lowered the tax a bit (about .2 euros) to discourage some drivers from switching to more harmful diesel cars. But he raised it another .3 euros so it could replace other taxes, such as the labor tax, considered more harmful to the German economy. Hence, .96 euros a liter.

And Tscharaktschiew only expects the number to climb over time. More fuel-efficient cars will make it cheaper to drive longer distances, which in turn will create the potential for more social costs of driving, which in turn calls for a higher gas tax to offset these impacts. Eventually he estimates the figure could climb as high as 1.69 euros a liter, or more than $7.62 a gallon.

Simply put, the gas tax in Germany is not only not too high, but “it is very likely to be even too low,” Tscharaktschiew concludes in a recent issue of Economics of Transportation. And that’s for a country that pays significantly higher gas taxes than the United States does. Though the calculations would need to be altered considerably for the U.S. context, the work strongly suggests that any gas tax that fully corrected for the social costs of car reliance would upend life as Americans know it.

Needless to say, a proposal to raise the gas tax this high would be laughed out of the room (at best). The short-term pain would be on the order of a housing collapse or a zombie invasion. Michael Specter of the New Yorker may have put it best when he likened cheap gas to “an industrial form of crack”: impossible to quit, no matter the damage it causes.

But in the long-run Americans would see some very real benefits from a price of gas that most closely reflected the true cost of driving. Fewer loved ones killed in car crashes. Healthier pregnancies and babies. More time spent with family and friends. Better access to jobs, and perhaps as productivity increased, higher wages. More livable developments and, with them, slimmer waistlines. Cleaner and quieter air. The sorts of things we can’t fit in our purses or wallets, but which cost us dearly just the same.