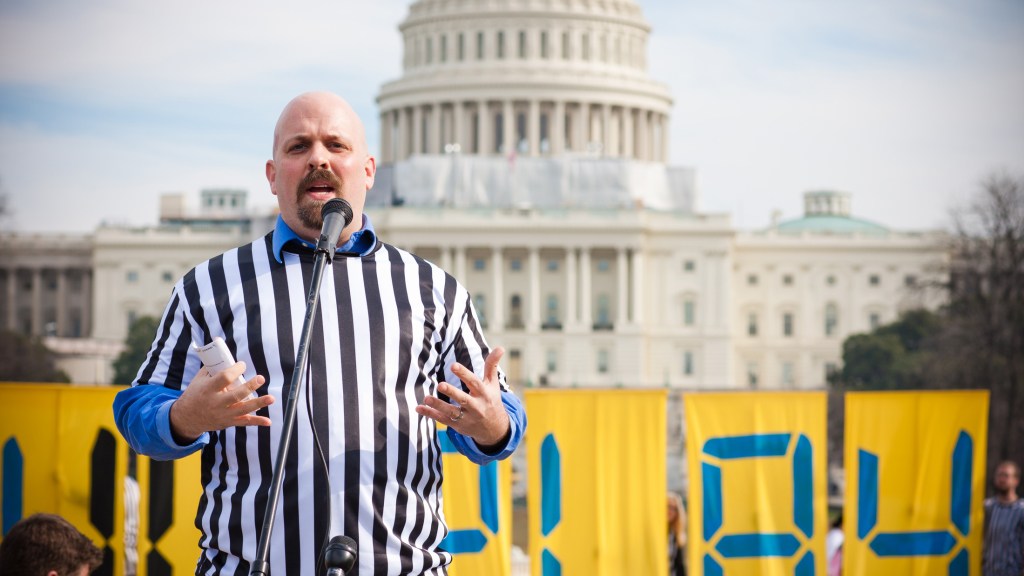 Phil Radford began his environmental activism as a student in the 1990s, organizing the shutdown of incinerators on the West Side of Chicago. He went on to work as a field organizer for environmental organizations and to found Power Shift, the youth climate change action movement. Radford worked as Greenpeace USA’s grassroots and national canvass director for six years before becoming, in 2009 at the age of 33, the youngest executive director in Greenpeace’s history. In both roles at Greenpeace he has managed campaigns against climate change.

Radford recently announced that he is stepping down from Greenpeace. We caught up with him to talk about how the environmental movement can address climate change in light of adverse political conditions, and how Greenpeace’s trademark commitment to direct action might be brought to bear on the issue. Below is an edited transcript.

Q. Greenpeace is most famous for direct action. It’s obvious how chaining yourself to a tree is meant to stop it from being cut down. But how does direct action apply to climate change, where the problem is so diffuse?

A. Between 1970 and 1980, when all the [major] environmental laws were being passed, you had 1 million people out in the streets on Earth Day. There was a great study by Jon Agnone, that I first read about on Grist, about the relationship between protest and when laws are passed.

What’s the one thing that got the president’s attention over climate change? The direct action with people getting arrested in front of the White House.

Q. How optimistic do you feel about the prospects for government action on climate change?

A. Realistically, Congress won’t do anything. There hasn’t been a major environmental law passed through Congress since Superfund in 1980.

A. The 1990 Clean Air Act was a significant amendment, but there has been no new major legislation since 1980. And in 1990 it was the last gasp of an old way. At the time, [Environmental Defense Fund President] Fred Krupp said, this is the third wave of environmentalism — market-based solutions instead of suing companies. But that was a symptom of the growing power of companies to influence environmental rules; environmentalists had to work with them. I grew up in the era of corporations having all this power.

Q. Obama is taking pretty aggressive action through the EPA, regulating power plant emissions and auto emissions. Is there more he could be doing within the constraints he faces?

A. Do I think the president is doing everything he can? Absolutely not … Just the sheer amount of permits, drilling rights, federal lands, and offshore drilling that he’s opening up, as well as pushing forward on export terminals for natural gas. [He’s saying], “We’ll pollute less here, but we’ll export the pollution.”

If you want to bend history in one direction, you have to put all your weight on one side and push, and he’s always in the middle so he can’t move in one direction. You would expect Congress to be a representative of yesterday’s industries because those [industries provide] jobs in their districts and funding for their campaigns. You would hope the president would have a vision. But instead he’s still out there trying to throw a bone to these industries he doesn’t owe anything to.

Q. Corporate influence on politics seems to still be getting worse. How can environmentalists push back?

A. We’ve completely changed our strategy based on this reality. We’re close to passing a law in Indonesia to stop deforestation. We asked government and they said no. We asked Asia Pulp and Paper and they offered a weak bill. So in the U.S. we cut Asia Pulp and Paper’s market. We went to Mattel, Disney, every major company that buys from them. Sometimes we negotiated and sometimes it was direct action. We said, “You’re wiping out ancient forests that are most important for carbon storage and biodiversity.” We had so much leverage, [Asia Pulp and Paper] asked what we wanted. We asked them to get out of endangered forests, switch to bamboo, and to back a national law with those same requirements. And they did. We did the same thing in Brazil with cattle ranching. We got U.S. companies like McDonald’s and Timberland to pressure them to pass a moratorium on destroying rainforest for cattle ranching and they did.

The other thing we’ve been doing as a response to the power companies have is the Democracy Initiative. I got together with Ben Jealous of NAACP, Larry Cohen from Communications Workers of America, and Mike Brune from Sierra Club to develop a shared unified campaign to get big money out of politics, get all voters to vote, and fix the Senate. Some 60 other groups have signed on.

Q. How can you get big money out of politics when the current Supreme Court deems the necessary campaign finance reform unconstitutional?

A. Momentum for a constitutional amendment [that would allow Congress to regulate campaign funding] is really growing at the state and local levels. Whether or not it succeeds at amending the Constitution, it’s going to change the debate. We also need a litmus test for Supreme Court justices about whether they think corporations are people. Local public financing initiatives are also taking off. Getting everyone to vote is important to building a counterforce to corporations, because the non-voters — young people, low-income people — don’t vote the Kochs’ way. It’s always people versus companies. If people’s voices are actually heard, we win.

Q. Do environmentalists also need a movement to back insurgent candidates from the left, like a mirror to the Tea Party, when incumbents side with polluters?

A. There’s no doubt there is a need for a green Tea Party for Democrats, and to get reasonable Republicans back in office … Great movements make great presidents. If you don’t create pressure and crisis for a president, you lose because your opponents are doing it the entire time. So someone you thought was your friend goes against you because you’re not playing the way your enemy is.