If you’re a betting person, it would be close to a sure bet to go all-in on 2015 taking the title of warmest year on record.

“I would say [we’re] 99 percent certain that it’s going to be the warmest year on record,” Jessica Blunden, a climate scientist with ERT, Inc., at the National Oceanic and Atmospheric Administration, said during a press teleconference on Thursday. 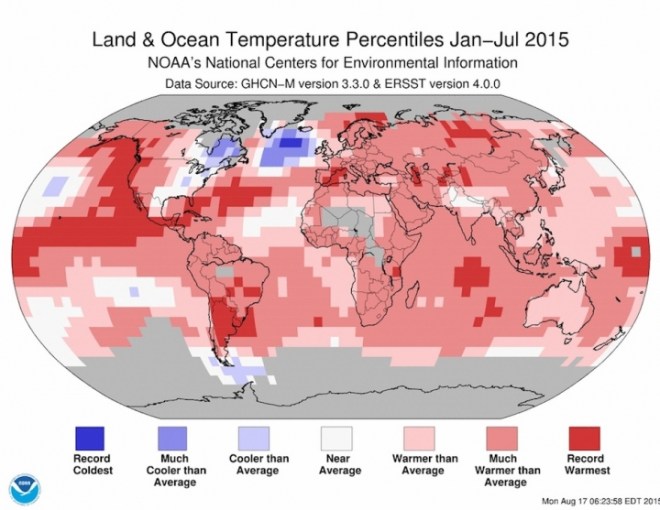 How temperatures around the world ranked for the period of January through July 2015. Click to embiggen.

According to the global temperature data compiled separately by NASA, NOAA, and the Japan Meteorological Agency, this July was the warmest July on record going back more than a century. It follows three other warmest months this year, with the remaining months ranking among the top four hottest, meaning that 2015 is the warmest year-to-date.

With an El Niño that could rank among the strongest on record expected to last through the rest of the year, the odds are good that 2015 will surpass 2014 atop the charts.

“We are now fairly certain that 2015 will be the warmest year on record for the globe,” Jake Crouch, a NOAA climatologist, said during the press teleconference.

In data released Thursday, NOAA measured July at 1.46 degrees F above the 20th century July average. Because July is also climatologically the warmest month of any year, this was also the warmest month the globe has seen since 1880, topping the previous record-holder, July 1998, by 0.14 degrees F. For the year-to-date, 2015 is 1.53 degrees F above the 20th century average, and 0.16 degrees F ahead of 2010, which had the previous warmest January through July.

El Niño has helped to boost temperatures this year, as it leads to warmer ocean waters in the tropical Pacific, as well as warmer surface temperatures in many other spots around the globe, including much of the northern half of the U.S. The El Niño has continued to build in strength of late and forecasters expect it to peak in the late fall or early winter, making it unlikely that the remaining months of 2015 will be cool enough to fall below 2014 in the rankings.

But El Niño isn’t the only thing driving up global temperatures. The continual warming of the planet’s atmosphere as heat-trapping greenhouse gases accumulate is also a factor. Since the beginning of the 20th century, Earth’s average temperature has risen by 1.6 degrees F, effectively loading the dice toward more record years today and moving forward. 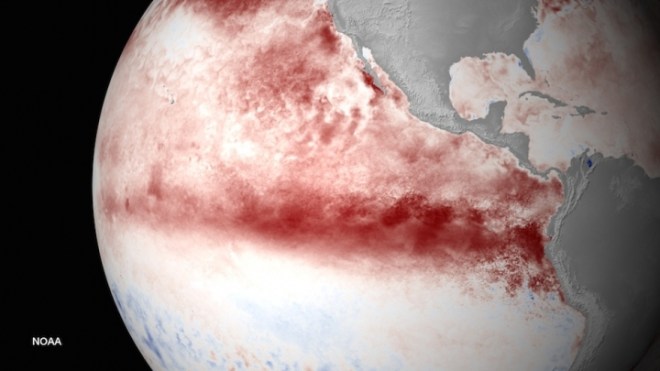 After 2014 was declared the warmest year on record, a Climate Central analysis showed that 13 of the 15 warmest years in the books have occurred since 2000 and that the odds of that happening randomly without the boost of global warming were 1 in 27 million.

Even during recent years when a La Niña (the cold water counterpart to El Niño) has been in place, the year turned out warmer than El Niño years of earlier decades.

Global carbon dioxide levels have risen from a preindustrial level of about 280 parts per million to nearly 400 ppm today. In recent years, CO2 levels — the primary greenhouse gas — have spent longer and longer above the 400 ppm benchmark. They stayed above this point for about six months this year, twice the three months of last year. It is expected that within a few years, they will be permanently above 400 ppm.

The continued rise of CO2 levels will raise the planet’s temperature by another 3 degrees F to 9 degrees F by the end of this century depending on when and if greenhouse gas emissions are curbed, scientists have calculated.

That means that some, future years are likely to continue to set records, even if there will still be year to year variations.

Which method of raising cows is the most climate-friendly?